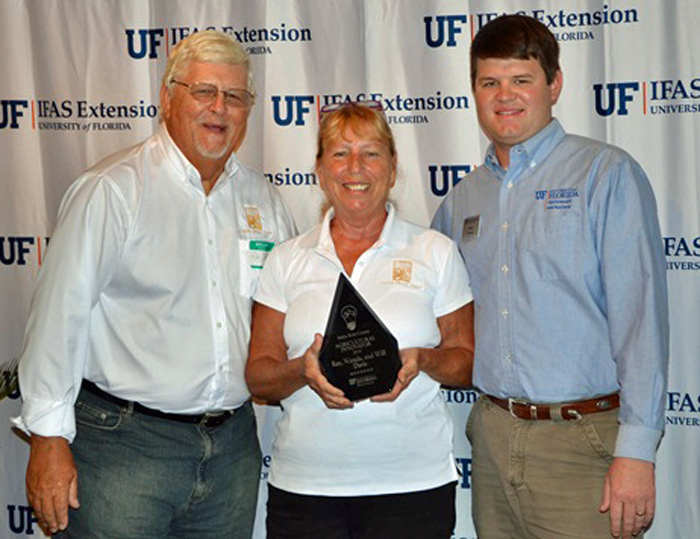 All of the county honorees have distinguished themselves as creative thinkers and leaders in the agricultural community.  This year Ray and Wanda Davis were honored as Agriculture Innovators by Santa Rosa County Extension .  Read more about the Davis Family and their Clear Creek Farm below.  The other Agricultural Innovators nominated this year will be featured in Panhandle Ag e-News over the coming weeks. 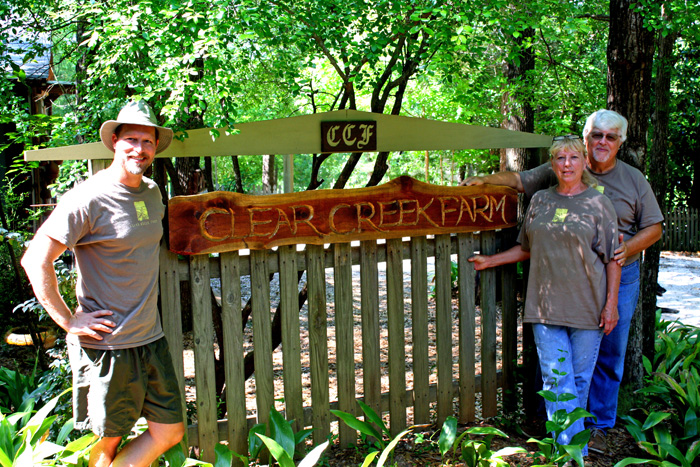 Ray and Wanda Davis are the owners of Clear Creek Farm north of Milton in Santa Rosa County. Ray spent a career in Insurance and Financial services while Wanda was an English professor at Pensacola Junior College. After retiring from their careers, Ray and Wanda decided to fulfill their dream, to operate a small fruit and vegetable farm. They bought the beginnings of their farm in 2004, with a shell of a horse barn, a well and 30 acres of hilly thick forest being the attributes it boasted at that time. Ray and Wanda’s son, Will, has also been a major contributor from the very beginning. Will designed, using his background as an artist, the concepts for the terraced production garden and also does much of the heavy lifting needed around the farm.

Clear Creek Farm is a small sustainable agritourism farm. The farm has a vegetable production area with fresh specialty heirloom vegetables and herbs that are sold to the Global Grill in Pensacola. The Davises also give farm tours to individuals, local school groups and other groups interested in seeing a solar powered fresh produce farm in operation.  A big part of the farm has been the hands-on workshops offered to the public on subjects such as grafting or square foot gardening. As part of the grafting course, Ray also sells the low chill hour apple trees that he grafts. 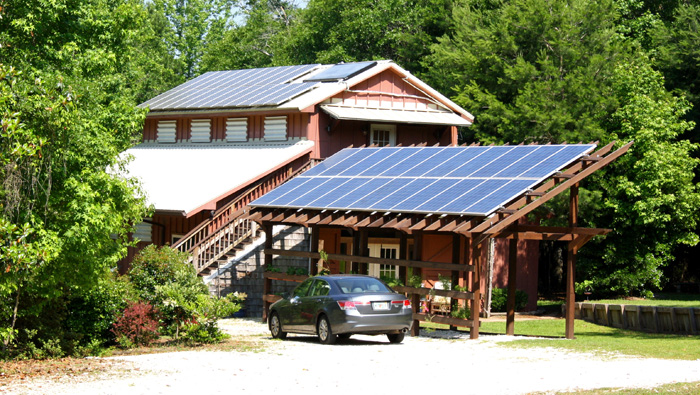 Clear Creek Farm, like many of the farms in Santa Rosa County, went without power for an extended amount of time after Hurricane Ivan in 2004. This led Ray to explore solar energy in an effort to be more self-sufficient, and the timing was right with many State and Federal incentives to use solar energy. They added standard solar panels and a solar hot water heater to the existing horse barn, and peel and stick thin film photovoltaic panels to the main production barn as it was under construction. The thin-film panels roll out flat and are adhered to the flat pan of a standing seam metal roof system, which creates a lower profile than traditional glass solar panels. These panels are also extremely efficient in low light conditions. The panels generate approximately 15 kilowatts to use any time on the farm on any given sunny day or to store into deep cycle marine batteries for use at night or on cloudy days. The farm generates more power than is needed at times and is able to turn the power meter backwards. The excess electricity is sold back to the local power company.  Due to the solar energy system the farm’s power bill can be as little as $20 per month. The charges are because, “Gulf Power won’t sell me the meter and I have to pay the meter and franchise fees.” To take their energy savings to the next level, the Davises bought a hybrid vehicle to drive to and from the farm. While at the farm they connect the vehicle to the system and it can be charged in an hour and a half. The gas tank in the vehicle is 10 gallons and he has only filled it three times since December of 2013. The Davis family finds great satisfaction in generating their own energy. Ray says “I’m not a smug greeny, but I take great satisfaction that I could unplug from the grid and live comfortably if I had to.”

The Clear Creek Farm has about 15 to 20 natural springs on the property. They have used the springs to the farm’s benefit by taking advantage of the constant temperature throughout the year. The spring water is pumped to their high tunnel structure where it runs through loops of geo-thermal pipes 4-6 inches under the soil. After using the spring water through the geo-thermal technique to cool crops in the summer and heat them in the winter, it is then pumped farther into the rainwater retention area that doubles as a reservoir for the drip irrigation systems and a water source in case of fire. Excess water spills over the retention area and continues into a built dry creek bed and back to its original low swamp destination. The project was completed in conjunction with the local soil conservation service.

Clear Creek Farm has been very involved with extension since the very beginning. Since Ray and Wanda both come from careers outside of Agriculture, they have both attended many extension events such as protected agriculture and hydroponics to expand their knowledge.  One of the workshops that the Davises attended was one that former Commercial Horticulture Agent Dan Mullins taught on deciduous fruit grafting. Dan had been working on bringing the Shell apple, a low chill apple developed in the area in the mid 1800s, back into production in northwest Florida. After attending the workshop and becoming more familiar with the Shell apple 4-H project, Ray saw the demand for the heritage apple and began to graft them for production. He planted an orchard at the farm and continues to get Shell scion from that orchard and the Extension demonstration orchard at the UF/IFAS West Florida Research and Education Center.

Ray and Wanda Davis serve on the Naturally EscaRosa advisory committee that is an initiative led by UF/IFAS Extension. Naturally EscaRosa is a website that is dedicated to the development and promotion of Agritourism and Ecotourism in Escambia and Santa Rosa Counties. As advisory members, the Davises work with agriculture and natural resource Extension Agents to help promote the effort. Clear Creek Farm also worked with Extension on the 47th Annual Santa Rosa County Farm Tour in 2014. The farm showed a different perspective on agriculture than traditional farms in Santa Rosa County. Extension worked with the Davises to show off the farm to more than 200 tour attendees. 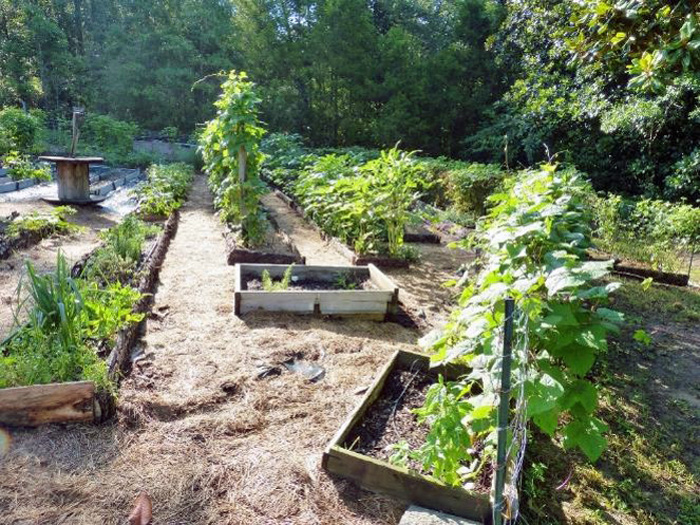 As the owners of an Agritourism farm and learning center, it is their mission to promote agriculture to the local community and Northwest Florida. Clear Creek Farm has accomplished this in many ways through community outreach. Ray and Wanda work closely with Carol Spice, a teacher at King Middle school in Milton. Carol leads a student gardening club called Earth Movers. The Davises use Clear Creek Farm as an advisory farm to the club. The club has taken several field trips out to the farm where Ray and Wanda are able to teach the school children with hands-on activities. Local churches and home school groups also are familiar with the farm and are frequent visitors to be exposed to agriculture. As another part of promoting sustainable agriculture in Northwest Florida, Clear Creek Farm has been involved with the Santa Rosa County Beaches to Woodlands Tour. The tour is a series of 40 stops in Santa Rosa County that highlights tourist attractions other than the beaches. Ray also donates low chill apple trees that he has from his grafting project to schools and churches. He believes strongly that as the nation’s farms shrink and the farming community as a group continues to get older, the young people of the nation need to be exposed to agriculture and self-sufficiency. 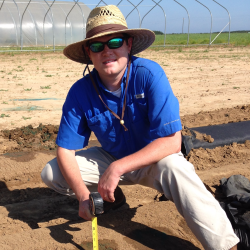