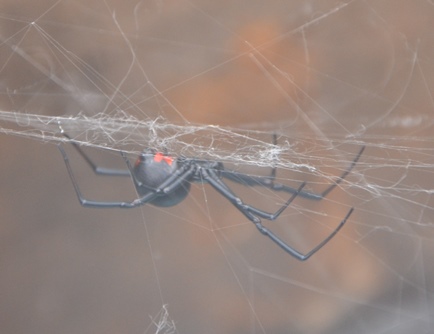 Though normally shy, a cornered or accidently injured black widow spider can inflict a damaging bite.

As the growing season concludes, field equipment is parked in the barns and sheds across the Panhandle. After an all too brief rest, farmers and ranchers perform the necessary maintenance on these agricultural assets.  Even still, unpowered and idle, this equipment can pose a danger. Insects are attracted to any crop residue remaining, and the small concealed spaces on these machines are ideal for spiders to ambush and entrap their prey.

The arachnids are not normally a concern, unless venomous. In this case, the most likely to be encountered while probing tight, hard to view spaces is the black widow spider.  The Southern black widow spider, Latrodectus mactans, is easily identified by its shiny, totally black body and the characteristic bright red shape on its abdomen or backside.  This spider is found throughout the southeastern United States, including north Florida, but it is not the wicked aggressor of gothic horror novels. In reality, this reclusive arachnid prefers isolated sites where it can hunt its prey without potential of human contact.

The southern black widow is one of three members of this genus which can be found locally. The less frequently encountered brown widow and red widow have many of the same behavior features, but with different coloring.  There are 32 species in the Latrodectus, or widow spider, genus which are found on every continent except Antarctica. Most of the females of this genus are dark with the distinguishing hourglass mark.

Widow spiders received their common name from the belief they would kill and consume their mate. However, the practice was mainly observed in laboratory settings under crowded conditions.  The bite of the southern black widow spider is toxic to mammals with many potentially damaging or deadly results. The females are equipped with the greatest concentrations of a neurotoxin which is used for hunting and defense.  The widow spiders construct a web of irregular, tangled, sticky silken fibers. The spider commonly hangs upside down near the center of its web waiting patiently for insects to blunder in and becomes entangled.  The spider quickly bites a victim then wraps it in silk before the insect can free itself and flee. It uses its fangs to further administer digestive enzymes, liquefying the prey’s internal organs before beginning to feed.

Southern black widows have poor eyesight and depend on vibrations arriving through their web’s silk strands to find trapped prey or warn them of a possible threats. While not especially aggressive, if cornered they will deliver a painful bite to the closest point of contact.  Most injuries to humans are defensive bites delivered when a spider gets unintentionally squeezed or pinched. No matter the circumstances, immediate medical treatment is advised.

Heavy gloves are recommended when working in areas which may be frequented by southern black widows. These included firewood piles, barns and outbuilding, and idled farm equipment.  Pay attention if that little voice advises caution when groping about in unseen places.