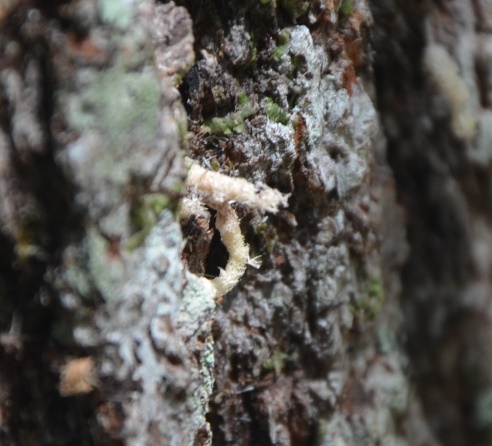 This tiny thread of sawdust is an indication of an ambrosia beetle infestation. Photo by Les Harrison

Ambrosia beetles are known for attacking various woody plants, causing some limb and stem dieback and sometimes plant death. There are at least 30 species of ambrosia beetles in Florida, several of which are non-native.

Typically ambrosia beetles have a symbiotic relationship with a fungus which the beetles carry in their bodies. When the beetles bore into the sapwood of the host tree, the galleries formed from the beetle boring are inoculated with the fungal spores.

As these beetles continue their damage the spores germinate and infect the host tissue. The fungus flourishes in the galleries and adjacent sapwood, disrupting the flow of water and nutrients in the tree.

As the fungus grows the beetles and their larvae feed on it and spread the new spores. It is a perfect example of a self-sustaining species which grows its own food.

Most ambrosia beetles attack trees and shrubs which are already stressed, dying, or dead. Plant stress may have been initiated by drought, flooding, freezing temperature damage, wind damage, or poor cultural practices. It is nature’s way of renewing itself with the strong and productive.

The Redbay Ambrosia Beetle (Xyleborus glabratus) is very small, about 2 millimeters in length, or 15 could fit head to toe in an inch. They are dark brown to black, cylinder-shaped beetles, similar to other ambrosia beetle species native to Florida.

The adult female Redbay Ambrosia Beetle has a special pouch in its mouth which transports the spores of the fungus responsible for laurel wilt disease (Raffaelea lauricola). When these beetles bore into the wood, forming galleries, the spores transported in its mouth and on its body infect the tree.

As this pathogen germinates, it colonizes the sapwood of the host plant by using the tree’s circulatory system to spread the disease. Unfortunately, the tree is usually doomed at this point.

The Redbay Ambrosia Beetle is native to east Asia, but the origin of the destructive fungus accompanying the beetle is not known. The beetle is believed to have been inadvertently released into Georgia in 2002 through infested packing materials, possibly wooden crates and pallets.

Several species of bay trees, sassafras, and avocado trees are all potential hosts for this imported pest. At present there are no registered fungicides for avocado which will control laurel wilt.

The best control measures are to not bring in wooden pallets and other similar products which may carry the tiny beetles, their larvae and the fungus. Firewood from distant sources is another potential carrier of this problem species.