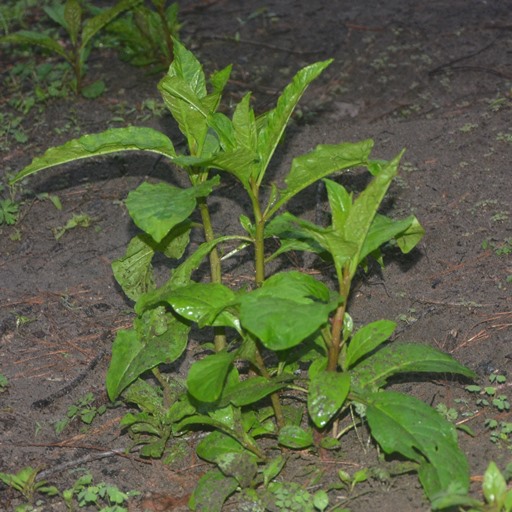 Warm weather and ample soil moisture have encouraged common pokeweed to get an early start in 2018.

Common pokeweed (Phytolacca americana) is a perennial weed native of North American frequently found in pastures as well as fence-rows, row crop fields, and wooded areas.  As winter moves to spring, this plant is emerging from its winter dormancy. The recent warm weather has accelerated the regrowth in North Florida.

Pokeweed is toxic to livestock.  All parts of the plant contain saponins, oxalates, and the alkaloid toxin phytolacine. The roots and seeds of this species contain the highest concentrations of these compounds.

Once common pokeweed becomes established, it regrows each year from a large, fleshy taproot. The crown of the root is where the plant is regenerated and can be as large as five and a half inches in diameter at the soil surface within two growing seasons.

Pokeweed usually has a red trunk like stem, which becomes hollow as the plant matures later in the year. Leaves become quite large as the plant grows to its full potential and are the basis for poke salad.

Each fruit contains about nine small, hard-shelled seeds. Pokeweed can produce over 48,000 seeds per plant annually.

These seed may remain viable in the soil for over four decades (40 years) under the right conditions. When exposed to the right environmental conditions the seeds sprout and the process is repeated.

In addition to feed for cardinals, mocking birds, cedar waxwings, and other birds, the pokeweed is a host to a variety of insects. Some are beneficial and others are not.  A number of caterpillars utilize this weed to sustain their larval stage of development. Unfortunately, some other less desirable insects use the local weed as well.

Pokeweed can act as reservoirs of various viruses transmitted by insects and are destructive to agronomic as well as ornamental plants. Whiteflies and aphids are the main culprits, but other insect species can contribute to the disease issue.

Control of common pokeweed can be a bit tricky because of its strong tap root and large crown.  Single plants can be removed by digging out the crown and most of its tap root.  For more extensive populations, the herbicide active ingredients glyphosate, 2,4-D, or dicamba can severely injure or kill the plant.

To learn more about pokeweed and its control, please read this UF/IFAS publication Common Pokeweed, or contact the nearest UF/IFAS County Extension Office.