Barn Bugs: Insects in the Outbuildings Can Still Be a Problem 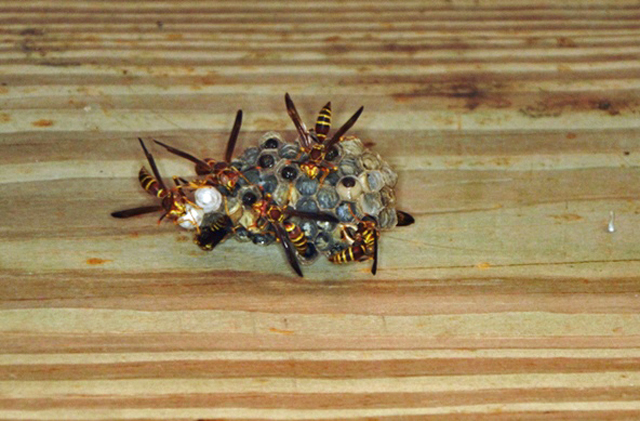 Paper wasps are one of several species of wasp which will inhabit the quiet recesses of barns. Disturbed, they will inflict immediate pain. Photo by Les Harrison.

By August’s languid days, farmers and farm workers in north Florida have done battle with an almost endless array of destructive bugs in fields and pastures. Thrips, aphids, mites, nematodes and many more have all marshaled against successful agricultural production.

Hopefully all have been repelled. While the focus has been on the defense of productive acreage, there are problematic insects establishing a foothold in barns, sheds and other ag-related structures.  Let’s take a look at one of these insects: the wasp.

Wasps are known for their foul nature and dreadful retaliation, if provoked. Whether the provocation was innocent or malicious, as many wasps as available will strike back at the offender.

Wasps fall into one of two general categories: social or solitary.

Social wasps live in colonies much like honeybees, and may have up to several thousand members. Depending on the species (such as yellow jackets or hornets), they build nests in protected places above the ground or below the soil’s surface.

Some social wasps are omnivorous, feeding on overripe fruit and carrion. Some of these social wasps, such as yellow jackets, may scavenge for dead insects to provide for their young.

Like honeybees, social wasp colonies consist of mostly female workers. Another similarity is only the females have stingers, and know how to effectively apply them. Unlike honeybees, the wasp queens live only one year.

A majority of the wasp colony dies away in autumn, leaving only the young mated queens alive. During this period they leave the nest and find a suitable area to hibernate for the winter.

There are also solitary wasps which live and operate alone most of their lives. They do not construct nests, instead depositing their eggs on host insects which serve as a sort of mobile nursery/café.

When the eggs hatch, the host becomes the first meal for the wasp larva. Mature wasps commonly feed on nectar and pollen.

Among these loners is a wingless wasp native to Florida. It is commonly known as the Velvet Ant or the Cow Killer. While it will deliver a painful sting, as other wasps will, there are no verifiable reports of livestock lethality.

Over-the-counter treatments can be effectively use on small nests which are usually found on ceilings and roof beams, and occasionally in idled equipment. Larger nests will require a pest control operator who has the necessary protective gear.

If the wasps are not a threat and left in place, just be sure to give them the space to work and live. Everyone will be better off for it.

For more information on this subject use the following University of Florida/IFAS and Alabama Extension publication links: