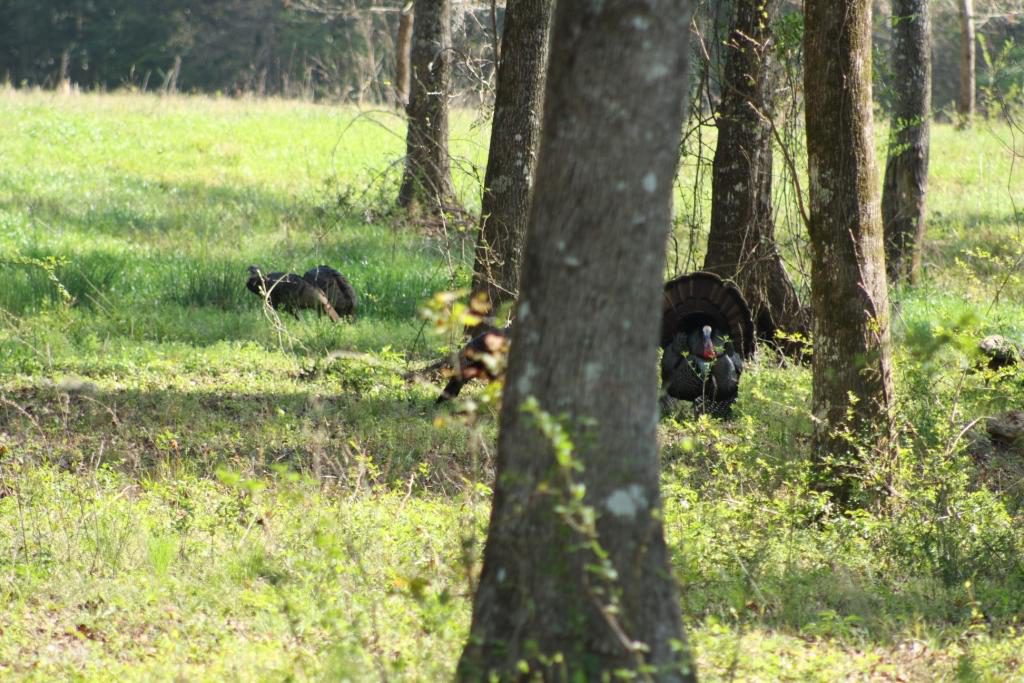 The above picture of a strutting Eastern Wild Turkey is a sight that many hunters look forward to seeing every spring here in the Panhandle of Florida.  In order to manage wild turkeys and their habitat, it is good to understand some basic facts about their biology.

Wild turkeys are considered a generalist species, meaning that they can eat a wide variety of foods, primarily seeds, insects, and vegetation.  They prefer relatively open ground cover, so that they can see well and easily move through their surroundings. That said, they can live almost anywhere that provides them year-round food and safety. They are a very adaptable species. Turkeys prefer low, moderately open herbaceous vegetation (less than three feet in height) that they can see through or over, and easily move through. The vegetation also needs to be in relatively close proximity to forested cover.  Such open habitat conditions help them see and avoid predators, and these areas will typically provide sufficient food in terms of edible plants, fruit, seeds, and insects.

Wild turkeys are considered, ecologically, to be a “prey species” and have evolved as a common food source for numerous animals. Turkey eggs, young (i.e.,poults), and adults are preyed on by such animals as bobcats, raccoons, skunks, opossum, fox , coyotes, armadillos, crows, owls, hawks, bald eagles, and a variety of snakes.  Being prey to so many different animals has shaped the turkey’s biology and behavior.  Turkeys experience high mortality rates and don’t live very long, on average, less than two years. They are particularly vulnerable during nesting and immediately after hatching.  Because of this high mortality, reproduction is essential for turkey populations to replace the individuals that don’t survive from year to year.  Wild turkeys have adapted to this aspect of being a prey species by having a high reproductive potential.  Hens have the capacity to lay large clutches of eggs.  If a nest is destroyed or disturbed, especially during the egg laying or early incubation period, the hen will often re-nest. Turkeys are also polygamous, with males capable of breeding multiple females, which further boosts their reproductive potential. 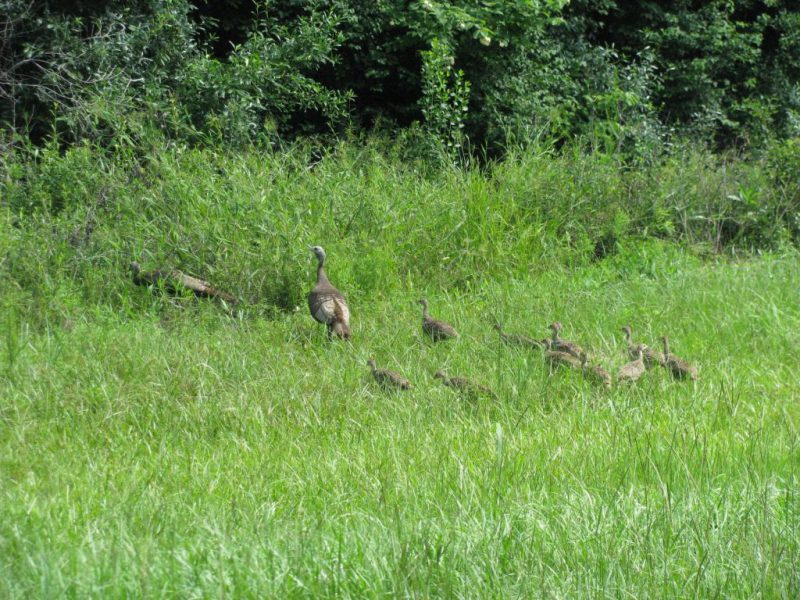 Newly hatched turkeys, referred to as poults, need grassy, open areas so they can find an abundance of insects.  Such areas are usually the most critical, and often the most lacking habitat in Florida.  Under ideal conditions for turkeys, grassy openings would occupy approximately 25 percent of a turkey’s home range.  Additionally, it is of equal importance to have such openings scattered throughout an area, varying in size from 1 to 20 acres. Small and/or irregularly shaped grassy openings are ideal because they maximize the amount of adjacent escape cover (moderately dense vegetation or forested areas that can provide concealment from predators or other disturbances).  Large, expansive openings (e.g., large pastures) without any escape cover are not as useful for turkeys, since they generally will not venture more than 100 yards away from suitable cover.

Good habitat allows turkeys to see approaching danger and to move unimpeded (either to move away from danger or simply to move freely while foraging without risk of ambush).  In other words, good habitat provides the right vegetative structure.  When thinking about habitat for turkeys, it’s good to always think from a turkey’s point of view – about 3 feet off the ground. Turkeys like open areas where they can see well and easily move. 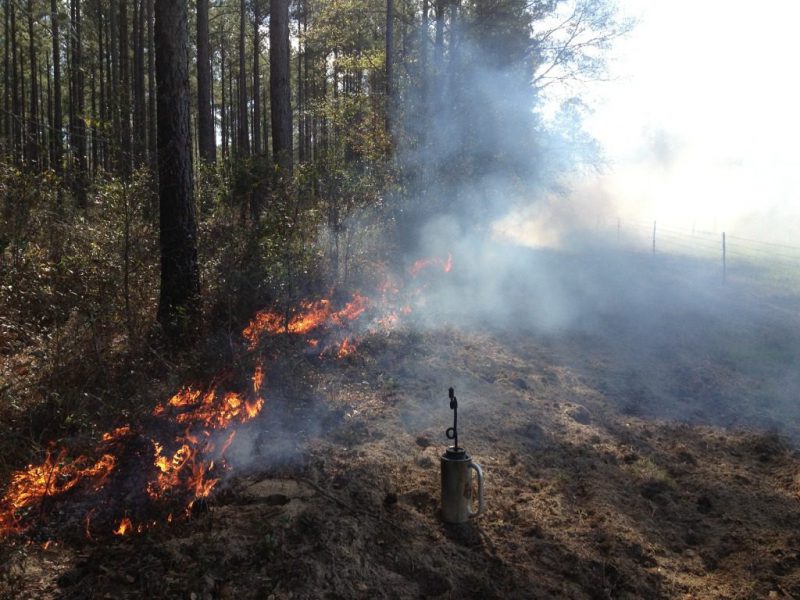 One of the best techniques to manage vegetation structure and composition is prescribed fire.  Fire can be very destructive, but if properly applied, fire can be quite beneficial to wildlife, and is one of the best things you can do for wild turkeys.  When applied correctly, fire has many benefits. Some of the benefits of fire to turkeys and other wildlife include: control of hardwoods and woody shrubs in the under story; improving vegetation height and structure; stimulating new herbaceous growth at the ground level; stimulating flowering and increased fruit production in some plants; and improving nutritional value and palatability of vegetation.  All of this leads to increased insect abundance and fewer parasites in the environment.  Prescribed fire also has benefits for the landowner.  Applied properly and regularly, prescribed fire will reduce risk of catastrophic wildfire which can destroy a timber stand.  It reduces hardwood competition, so favored pines grow faster and healthier. It reduces the risk of disease, particularly after a thinning or timber cut, by removing logging debris that would otherwise attract insects and disease-causing agents.  Fire can also help control invasive species. Added to these benefits is the fact that on a per acre basis, prescribed fire is one of the least expensive management practices there is. 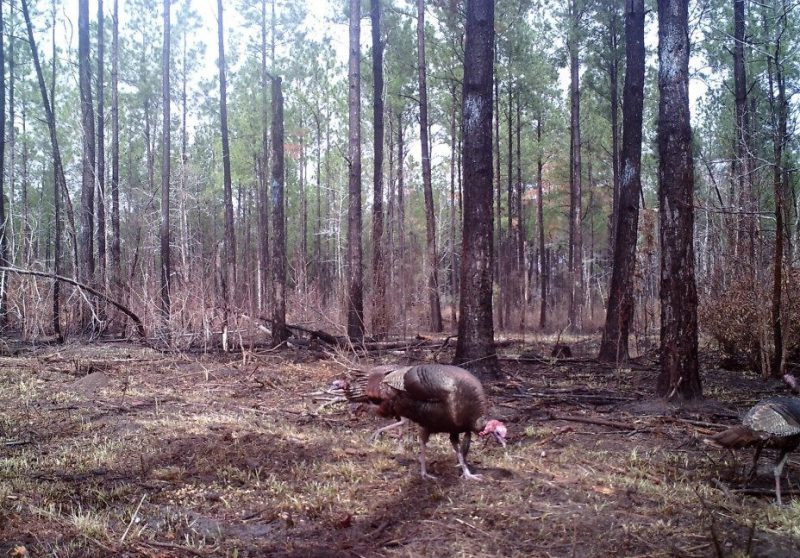 Another good practice is simply mowing vegetation. Even in areas that aren’t very thick (such as around forest and field edges, or seasonal wetlands), mowing alone, without fire, is beneficial as it has much the same effect on the habitat as fire.  Basically, you’re removing grown up vegetation and allowing light to reach the ground again. Within pine plantations, roads often provide some of the best, or only, turkey habitat simply because the surrounding vegetation becomes too dense, so roads are used for feeding and moving throughout the area. In this regard, wide roads increase the amount of open habitat which provides lots of insects, seeds, and edible vegetation. They also reduce the opportunity for predators to ambush turkeys, which can readily occur on narrow roads.  Having wide roads is a good land management practice; wide roads dry-out quicker, allowing them to hold up to traffic better.

If you have pine dominated timber stands on your property, proper thinning is not only good for turkeys, but it’s good for your stand. Young pine stands, particularly those in sapling or early pole stages, are often too thick for wild turkeys, except as escape cover.  They get so dense that they shade out everything underneath.  They may produce some pine seeds when they get older, but for most of the year, there’s nothing to eat and nothing to attract turkeys to the area.  For turkeys, thinning opens up the canopy and allows sunlight to reach the forest floor, which in turn stimulates the growth of grasses, forbs and soft-mast producing shrubs.

If you have an interest in turkeys, reduce management activities during the nesting season, which generally runs from the middle of March through June.  From a practical standpoint, completely avoiding this time span may not be possible. Generally speaking, the overall importance of management efforts will often outweigh the loss of one or two nests. This is largely because if a nest is destroyed (whether by predators or management efforts), a hen will quite often re-nest. However, turkey nests are at a premium when a turkey population is low or just trying to get established in an area. In these scenarios every nest is valuable and special care should be taken.