The squash bug, Anasa tristis, is a common insect pest of squash and other cucurbits.  Squash bugs have a six to eight week life cycle, and can have up to three generations per year in Florida.  They generally lay their eggs on the lower surface of leaves, but eggs can also be found on leaf petioles, and flowers.  Eggs are bronze in color and shaped like tiny (about 1/16″ in length) footballs.  They usually hatch 7 to 9 days after being laid. 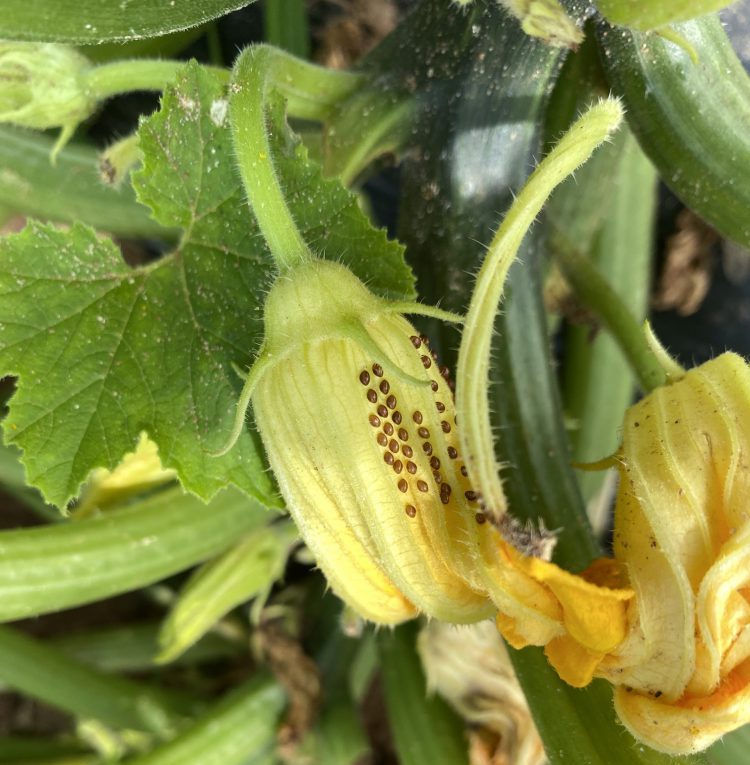 The nymphal stage of squash bugs is completed in about 30 days.  Depending on the instar (nymph age), nymphs can range from 1/8″ to 1/2″ in length.  Younger, smaller nymphs are hairy, but most of their hair is not noticeable as adults.  Adults are 1/2″ to 5/8″ in length and range from grayish to black in color.  Usually they have gold and brown spots on the edge of their abdomens.  Adult squash bugs can live for 75 to 130 days. 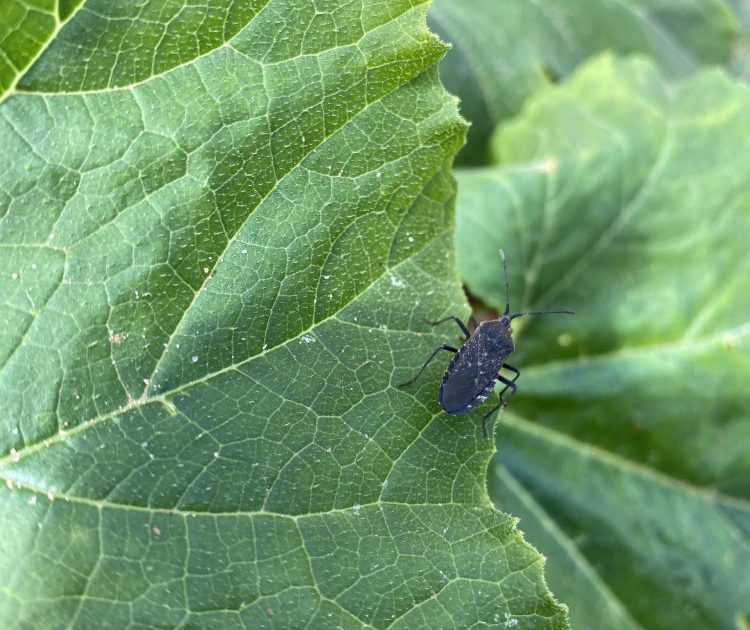 Squash bugs are known to attack all cucurbit species, but they prefer to lay their eggs on squash and pumpkins.  However, eggs have been found on watermelon, in some parts of Florida.

Squash bugs generally feed on the leaves of cucurbit crops.  While feeding, the secrete toxic saliva into the plants.  Their saliva causes the leaves to wilt, blacken, and fall off the plant. Often, only one plant in a row will be infested and die, while nearby plants won’t be affected at all.  In addition to feeding/saliva damage, squash bugs can also act as vectors for the bacterium Serratia marcescens that causes cucurbit yellow vine disease (CYVD).  Squash bugs not only transmit this disease in one season, but the bacterium can overwinter in their stomachs to cause damage in the following season.

Natural Enemies – Wasp egg parasitoids from the order/families Hymenoptera/Encyrtidae and Scelionidae are known natural enemies of squash bugs.  The most common natural enemy is Trichopoda pennipes, which is a small feather-legged fly.  They lay their eggs in female squash bugs that are decapitated when the flies emerge from their eggs. 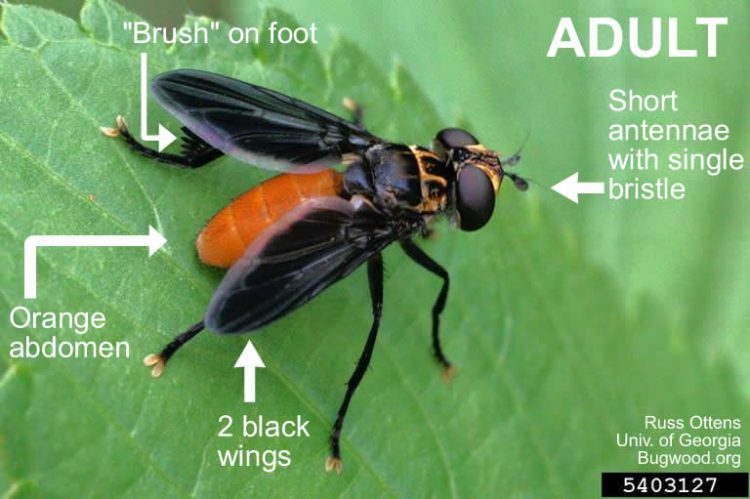 Adult squash bugs are difficult to control with insecticides.  Insecticides should be targeted to control nymphs.  Pyrethroids such as lambda-cyhalothrin and neonicotinoids such as dinotefuran are commonly used for squash bug control.  A full list of chemical control options are listed in the UF/IFAS Extension Vegetable Production Handbook.  If these products are used it is important to apply them later in the day when honeybees are less active.  Some melon and cucumber farmers have had success with planting pumpkins and/or squash as a trap crop.  More information on trap crops can be found in the EDIS Publication: Intercropping, Pest Management and Crop Diversity.