Get Ready for Whitefly Season in Fall Vegetables this Year

Soon, vegetable growers from North Florida will transplant tomatoes and cucurbits for the fall season. The most feared pest during this season is the sweet potato whitefly, Bemisa tabaci.  Whiteflies are very difficult to manage because they are numerous, feed on a wide variety of plants, and transmit viruses that can destroy a crop after planting. Among the viruses, the Tomato yellow leaf curl virus (TYLCV) is one of the most damaging (Fig. 1A). In the Panhandle, whiteflies generally appear in mass by mid-August and persist until November. Some years have been very difficult for growers, such as 2017 when virtually all susceptible tomato and cucurbit crops in some regions were decimated by whiteflies and their associated viruses. 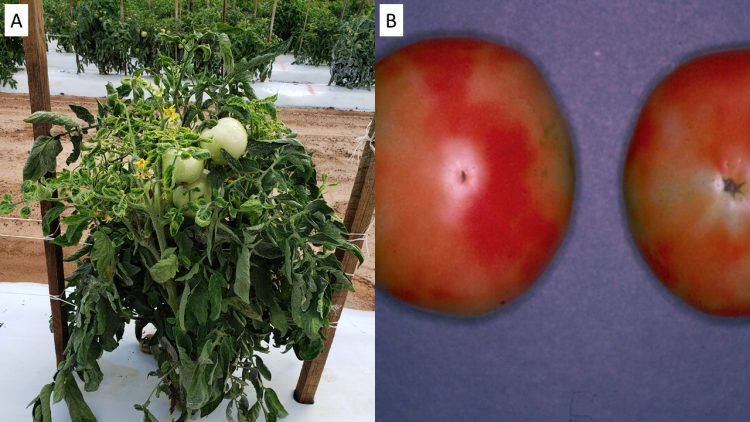 What causes whitefly populations to vary from year to year?

Scientists are not completely sure why whitefly populations explode some years and are manageable the next. However, we know that mild winters are good predictors of high whitefly populations in the fall. Early findings of whiteflies in weeds, soybean, and cotton are also good indicators that the whitefly population is already established in the landscape and has the potential to multiply exponentially.  The fact that this past winter was unusually warm, and that whiteflies are already being found in abundance on cotton and weeds both indicate that the upcoming fall season is at risk for high whitefly infestation.

What can you do?

As of today, most seed orders are already made; however, for tomato it is a good reminder that during the fall season, preference should go to TYLCV-resistant varieties such as Grand Marshall. However, even if the crop will be protected against TYLCV, tomato plants are still susceptible to irregular ripening, a symptom that is induced by whitefly feeding, not viral infection (Fig. 1B above). Therefore, management of whiteflies is still highly recommended.

In addition, there are series of cultural practices that should be used successfully to minimize whitefly populations. UV-reflective mulch, for instance, has been found to be highly repellent to whiteflies. Using this reflective mulch will significantly reduce the numbers of whiteflies in cultivated crops. It is also important to space crops apart from each other as much as possible. Whiteflies are highly mobile and will migrate from one plot to another very easily. For example, if a tomato crop is near a cotton field, you can be certain that it will quickly be flooded by whiteflies.

Regarding insecticides, the basic rules of whitefly management are to 1) act immediately and 2) rotate modes of action to avoid insecticide resistance. Crops are at higher risk during the first weeks following transplant. Whiteflies prefer young emerging leaves; therefore, crops freshly transplanted are highly attractive to them. At planting, and the following week, it is highly recommended to treat your crops with a drench of systemic insecticides, either neonicotinoids or diamide. In the past, imidacloprid (a neonicotinoid) has been the preferred insecticide for this initial drench application. However, due to its widespread usage, we are finding more and more instances of resistance in whitefly populations (Fig. 2), and we recommend rotating to a diamide (such as cyantraniliprole or chlorantraniliprole) every other year for this initial drench. 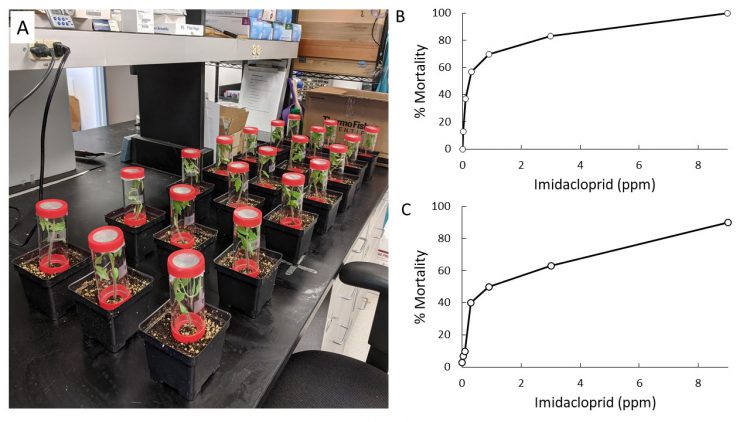 Following this initial application of systemic insecticides, a good follow-up option is the application of a growth regulator. Growth regulators are insecticides that will only kill eggs and nymphs. They should not be used in the first weeks following transplant, while the previously mentioned systemic products are active and there are no/few eggs or nymphs present. Among growth regulators, pyriproxyfen has given some of the best results in field trials conducted in Quincy, and is highly recommended to include in the rotation program.

Finally, growth regulators can be followed by spray applications of a new molecule such as afidopyropen (Sefina) or Pyrifluquinazon (PQZ). The advantage of these insecticides is that they are new on the market; therefore, whiteflies are highly susceptible to them. In initial field trials conducted last year at the North Florida Research and Education Center, we found good reduction of whitefly adults and nymphs with these two compounds.

For organic growers, in addition to M-Pede that is widely used by growers, a 1:1 mixture of Requiem and BoteGHA gave good reductions in whitefly populations. Also, kaolin clay (Surround) has good repellent effects on adults, and can be used in rotation with synthetic and natural insecticides.