Dealing with the Sweetpotato Weevil

Sweet potatoes are widely grown in Florida, especially on small farms. Foliar pests such as whiteflies, leafminers, and armyworms are generally of minor concern. The most serious insect pests are the immature stages of insects that feed on the roots and tubers; among these the sweet potato weevil Cylas formicarius is by far the most damaging. 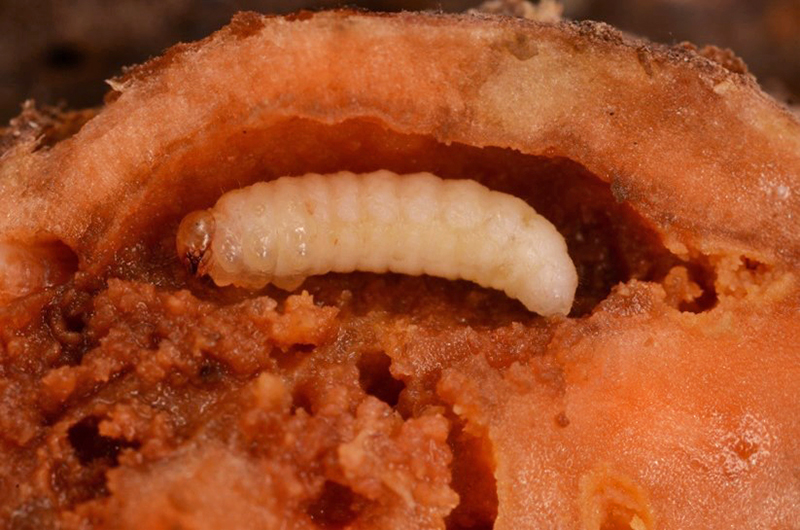 Sweet potato weevil eggs are inserted in the vine or fleshy roots. The larvae are found in small holes on the surface of the potato; they are 1/3 inch in length, legless, and white (Figure 1 above). They can also be found in the vine. Development takes one month, and the adults can live up to 4 months. Adults are easily recognizable by their black head and elongated snout (Figure 2 below). The antennae, thorax, and legs are reddish-brown to orange, and the abdomen and elytra are metallic blue. 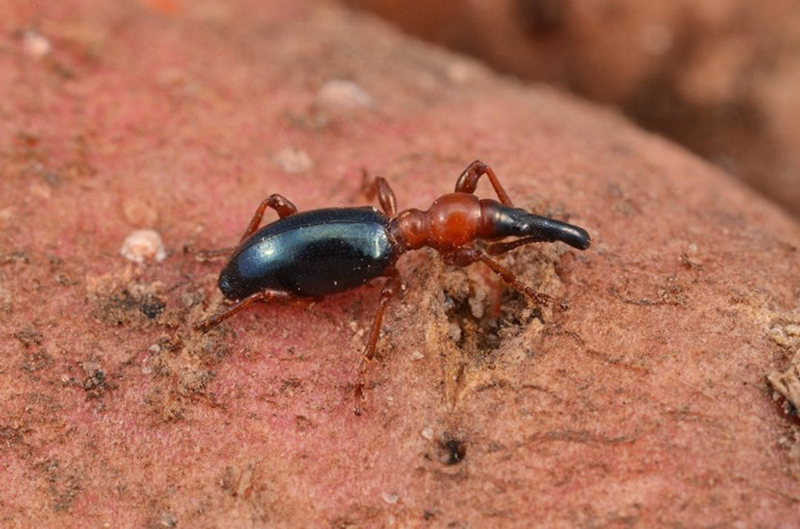 Sweet potato weevil is a serious pest of sweet potatoes because even minor damage induces the production of terpenes that give an extremely bitter taste to the tubers, making them unmarketable. Some varieties of sweet potato such as Regal, have moderate resistance to sweet potato weevil, but the most popular orange-fleshed variety, Beauregard, is highly susceptible.

In areas of the state where weevils are not common, it is very important to use only certified slips or transplants from weevil-free areas to avoid introducing weevils. The adult weevil does not have wings, and the larval stages are most often moved by transporting infested plants or storage roots.

Cultural practices can dramatically reduce weevil problems. Ideally, the soil should be turned two to three months before planting. Weeds that can be used by weevils for overwintering should be controlled. Hot and dry conditions increase risk of sweet potato weevil damage; therefore, irrigation significantly reduces the number of sweet potato weevil and decreases damage. Organic mulches of dry cypress, eucalyptus, and lucerne reduce the number of weevils, as well as feeding holes in tubers.  During the growing season, keeping storage roots covered with soil helps reduce damage by preventing female weevils from laying eggs directly in roots. Crop rotation is also important; avoid growing sweet potatoes in the same field two years in a row. New fields should be at least a mile from old fields. Remove and destroy crop residues and culls immediately after harvest. Empty and clean potato storage areas thoroughly at least a month before harvesting the new crop.

The female sex pheromone of the sweet potato weevil has been identified and is used either for mass trapping of males with pheromone disruption. Pheromone-baited traps (such as Pherocon Unitraps) are found to be effective in reducing the weevil numbers and the damage due to sweet potato weevil. Pheromone lures are effective for 8 weeks and are most effective in a 50 meter radius.  A density of 100 traps per acre eliminates damage on root tubers.

Biological control agents include parasitoids and the fungus Beauvaria bassiana that can be applied to the crops. Interestingly, fire ants are good predators of sweet potato weevil, and colonies within the sweet potato crops should be conserved when possible.

For more information, use the following publication links: