Jerusalem Artichoke (Sunchoke) – A Crop for the Back Forty

Thanksgiving is next week, Christmas is next month, and spring is just around the corner.  A mostly forgotten crop that can be planted in early spring is the Jerusalem artichoke (Helianthus tuberosus L.), also known as a sunchoke and not to be confused with a globe artichoke.  Jerusalem artichoke is a root vegetable, but produces an attractive flower, reminiscent of a sunflower, on 8-10 foot stalks.  It has the potential to be a dual purpose crop by serving as photo opportunity at an agritourism venue and by providing a tasty tuber.  Although Jerusalem artichoke is a tuberous perennial, it is usually grown as an annual with all tubers being harvested at the end of each season.  Tubers are generally 3-4 inches long and resemble knobby Irish potatoes.  Each plant produces several tubers. 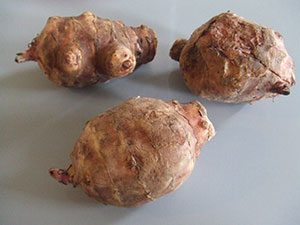 Jerusalem artichoke should be planted in well-drained soil to help prevent tubers from rotting.  Whole tubers or pieces of tubers (around 2 oz. in size) containing at least two buds are planted in early spring.  Tubers should be planted 2-4 inches deep and 18-24 inches apart in rows that are spaced 30-42 inches.  A soil test should be conducted prior to planting and a fertility program similar to that for potatoes (200 lbs. N/acre) should be followed. 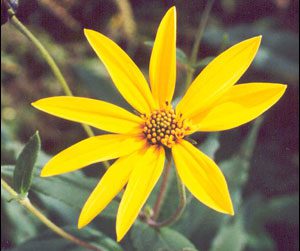 The crop should be in the ground for at least 120 days before harvest, but tubers left in the ground until after the first frost are sweeter.  To harvest, tops should be cut with a mower before tubers are dug.  A potato harvester can be modified to account for the smaller size of Jerusalem artichoke for harvesting.  Tuber skin is thin, so care should be taken when handling to avoid skinning and bruising.  After harvest, the crop should be immediately put in cold storage (32°F at 85% to 95% relative humidity) to avoid moisture loss.  Tubers can be stored in these conditions for several months.

Despite the name, Jerusalem artichoke is native to the United States.  This unique crop is very hardy, so it has invasive potential.  It is critical to harvest all tubers and not to leave any pieces in or on the ground.  If volunteer plants are found the following spring, remove them from the field immediately.  Seed tubers are hard to come by, but once you start growing this crop you can collect your own tubers.  You may be able to find tubers locally or you can search online.  A few websites that have had tubers for sale in the past or that have tubers available on backorder are Gurney’s, Seed Savers Exchange, and Oikos Tree Crops.  As with any farming venture, it is advised that you assess the risks involved before growing this crop.

For more information, use the following publication link: