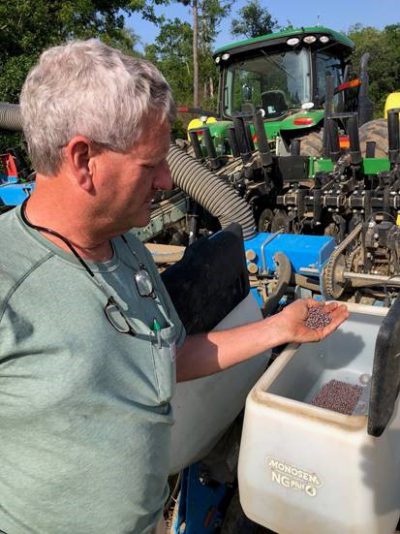 Time for early system soybean planting is now in most of Georgia. You want all chance of frost over before proceeding. Southwest Ga. Grower and Georgia Soybean Commodity Commission Chairman, Greg Mims is here planting some group 4 indeterminate soybeans. Strip tilling them with a ripper shank for good root growth in these 20 inch rows.  The following is a useful excerpt from The UGA Soybean Production Guide concerning early system soybeans:

The early soybean production system (ESPS) is a soybean production system that utilizes indeterminate early maturity group V or earlier maturity group soybean varieties to facilitate earlier planting and harvest of soybeans.  This system has slowly been gaining adoption over the last several years in Georgia and is most commonly adopted in the Middle/Upper Coastal Plain and Limestone Valley regions of Georgia.  While the ESPS has shown great yield potential in Georgia, there are management decisions regarding row spacing, planting, and harvesting that should be considered for high quality yields to be achieved.

Soybeans in the ESPS should be planted as early as possible after the last historical frost in your region.  This could be as early as March 15th in the lower coastal plain region or as late as May 31st in extreme Northeast Georgia.  The optimal planting window for the majority of Georgia’s soybean growing regions will be April 1st to April 30th.

As soybean in the ESPS are planted into cooler soils recommended seeding rates are greater than those for full-season production systems.  Seeding rates in the ESPS should be around 120,000 to 140,000 seed/acre to achieve maximum yields.  These seeding rates should result in final plant populations between 100,000 and 120,000 when accounting for varietal germination rates and reduced germination by cold soils.  Research in the mid-south has demonstrated that final plant populations as low as 75,000 plants/acre did not yield significantly different from higher populations, so long as stands were uniform and did not contain large gaps.

Harvest timing is the most critical management decision in order to obtain the best grain quality in the ESPS.  Soybeans grown in the ESPS will typically reach maturity and begin drying down in late-August to mid-September.  This will coincide with seasonal rains and hurricanes with mature soybeans sitting in the field drying down and waiting on a combine.  A timely desiccant application can help alleviate this issue and improve seed quality.  Current soybean desiccation products include Aim, Paraquat, Sharpen, and Sodium Chlorate.  Before using any desiccant ensure you read the product label and understand all application and preharvest interval restrictions.

Corn looking better… but still many yellow/poor looking fields across the state.

I’ve seen several fields with nematode damage due to (1) the nematodes being present, mostly Stubby root, also Sting and Root knot and (2) many factors slowing plant growth. I’ve just seen 4 that were positively confirmed with nematode tests. Some folks are asking why is there so much damage when low numbers of nematodes come in on the test results.

Dr. Kemerait says the Stubby root nematode in corn acts differently from the rootknot types that many of us are more accustomed to with their exponential number increase over time.  Stubbies will rise and fall in number and sometimes are even hard to find in a sample. In the absence of herbicide problems or other root inhibition problems, if the roots are compromised… it is likely nematodes. There are times when roots don’t look too bad to our eyes but we still have enough nematodes to affect crop growth. Test to make sure and pull the sample in affected root areas, adding roots. Keep the sample moist and cool and get a big sample and get it to a lab quickly. 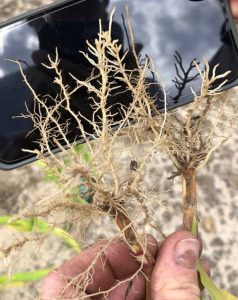 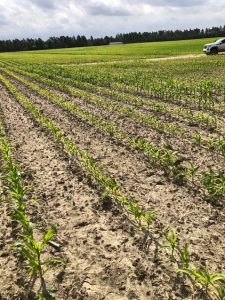 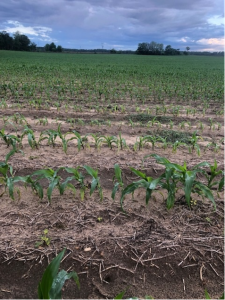 Recent cool growing temperatures, freeze damage, sand blasting, pounding rains, blasting winds, and fertilizer leaching rain have worked together to make this a tough nematode year especially in sandy soils. Babying the crop with extra water and spoon feeding fertilizer, especially Nitrogen and Sulfur…. now that we know we have a compromised root system…. is what we need to do to get back mostly on track in these affected fields.

There are other reasons corn’s not looking right and some is yellow and maybe have striped leaves as in photo below and this is often Sulfur deficiency or imbalance in the plant. Sulfur leaches easily especially in sandy fields. Dr. Harris says we need our ratio with Nitrogen to be good, so it’s a good idea to include sulfur with our sidedress N applications. A plant tissue analysis is good to confirm this problem. 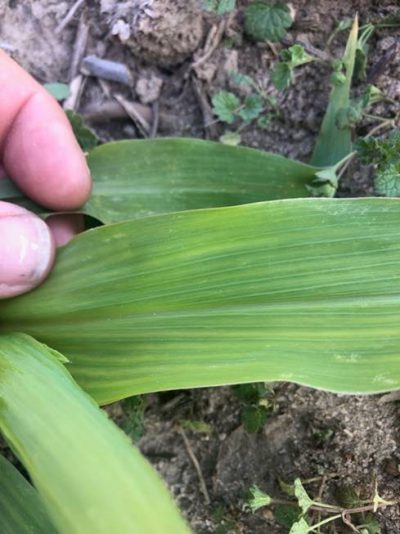 We’ve had lots of high wind and sandblasting is pretty common especially next to peanut fields that have been broke and are wide open. You can tell in this photo the sandstorm happened a few days before so the new growth is mostly unaffected. My thumb is at the point where the leaf was unfurled from the whorl, so below that and the 2 new leaves at the top fared better. This is where we talk about something happening at a point in time. 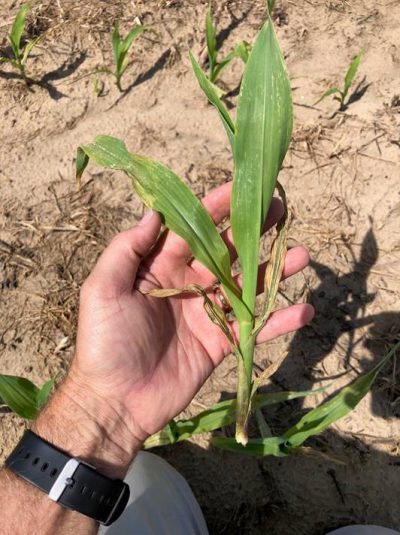 Also, granular fertilizer applications sometimes burn corn leaves as seen below, especially if the leaves are wet. This isn’t too big a deal with small corn but not desirable. You can see where the granules accumulated in the whorl just above the fingers and then the upper exposed part of the plant were affected. Photo shared by Tye Torrance. 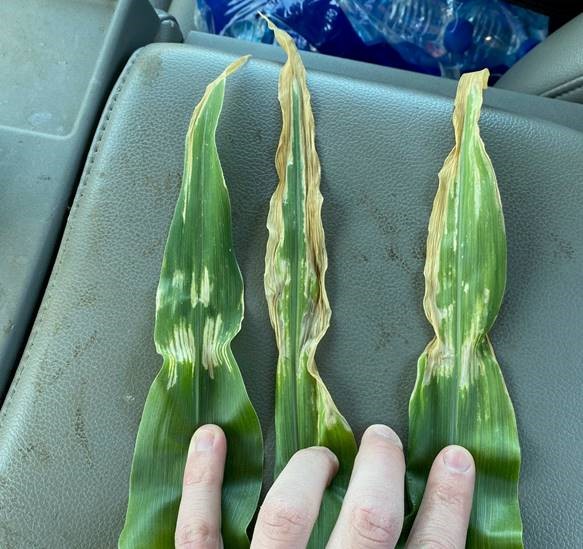 Here‘s some corn leaf damage caused by thrips with their tiny rasping mouthparts. This is next to a wheat field and is not a serious problem but it can be confused with other things and the areas become necrotic at times. 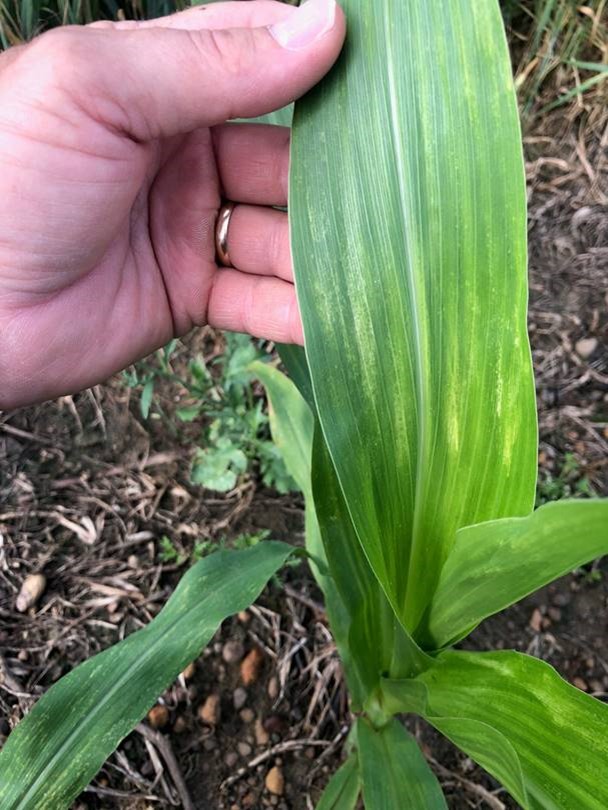