Early System Indeterminate soybeans are now setting pods. They set them starting at the bottom of the plant and work their way up. The plant keeps growing and blooming. Determinate varieties, like what is mostly grown in Georgia, do it differently.  They grow their full height first and then begin flowering and setting pods at the top of the plant.

The different maturity groups grow different amounts of time before beginning to flower, depending on night length. So a group 5 will stop growth and flower about a week before a group 6 variety. So generally, later in the planting season you plant a little later variety so it doesn’t bloom when still very short. But each variety is different so it takes some investigation to see what is suited for the timing and where you are in Georgia. See the UGA Soybean Production guide and the UGA Statewide Variety Testing site for more info.

Here’s photos I took today of an indeterminate group 4 variety that is setting pods at the bottom of the stalk and blooming and plants are pocket high and still growing. The roots are impressive and full of Nitrogen fixing nodules, look for pink inside them if they are actively working, (remember they are attached to the root whereas root knot nematodes would be a swelling of the root, although at first glance it’s hard to tell the difference).  These were planted on April 20th, so are 52 days old. We are watching for caterpillars and stink bugs, especially the very destructive red banded one, and whiteflies and diseases on these now. Its important to keep these wet now as well for best yield as they are beginning to fill pods. 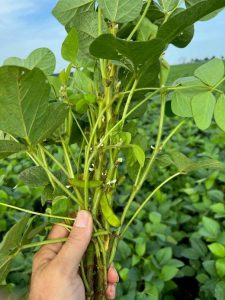 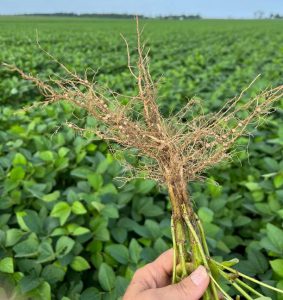 This week in corn we are seeing some Southern Rust in several counties and some smut along the edges is fairly common, especially if stink bugs are present. Dr. Kemerait showed us in Tifton this week that it is edible by eating some raw.

Stink bug sightings are common in corn fields this week, with some egg masses and immatures, and so many fields have been sprayed with a fungicide and insecticide combination.

Many early planted fields are in the Milk stage ( aka Roastin’ ear stage), R3 which is the highest water use stage in corn, 2.4 inches a week. Kernel abortion can happen in the blister and milk stages under stress, where the kernel collapses and doesn’t continue to fill.

Our oldest fields are in the Dough stage R4, seen in photo taken today below, so we generally need about 4.5 weeks until this field will be mature depending on heat unit accumulation.

When we are past the milk stage we don’t abort any more kernels, but stress can cause lower kernel weight. Still need 2.3 inch a week during dough stage. Remember if you get a big, maybe 3 inch rain, you can’t count the whole amount cause our soils can’t hold that much for long. Usually count about an inch but there’s more information on this with different soils in the UGA Corn Guide. 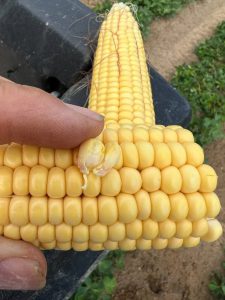