Diaprepes Root Weevil Expands its Spread in the Panhandle

The diaprepes root weevil (aka the Apopka weevil) is expanding its spread in North Florida and is now in Bay County.  The weevil has threatened citrus and nursery crops in Central and South Florida since it was introduced to the state from Puerto Rico in the 60s.  The weevils found recently in the Panhandle were feeding on an apple tree.  The first report of this insect in the Panhandle was in Jefferson County in 2018, and has since been commonly found around Tallahassee.  This most recent finding is the farthest west the weevil has been found in the Panhandle.

Adult diaprepes root weevils can be from 3/8 to 3/4 inches long.  They are black with white, red/orange, and/or yellow stripes on their wing covers.  Larvae are white and about 1 inch in length.  Eggs are oval-shaped, smooth, pale yellow to white in color, and laid in an unorganized cluster on plant leaves. 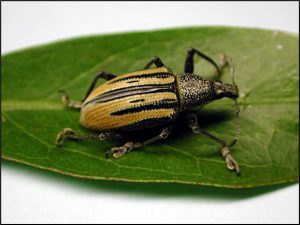 Diaprepes root weevils are a quarantined pest.  Nurseries in quarantined counties are required to follow specific insecticide treatments prior to shipping outside of the infested area. It is believed that it is currently the transport of ornamental trees across Florida that is responsible for the spread.   Potentially infested crops should be monitored visually for the adult weevils by looking for feeding damage and adult weevils on the crop and associated weeds.

In addition to citrus, Diaprepes root weevil have a wide host range and have been recorded feeding on live oaks, crape myrtles, and Ligustrum species.  They have also been found feeding on pokeweed,  sicklepod, and are currently an issue in blueberry production.  In addition to ornamental and fruiting trees, larvae also feed on the roots of various vegetable crops such as potatoes and sweet potatoes.  Adult weevils feed on crop leaves creating distinct notches.  The larvae girdle the roots, limiting the ability of the plant to take up nutrients and water.  In addition to damaged caused from feeding, some ornamental plants are more susceptible to Phytophthora root rot due to feeding damage.  In addition to insecticide treatment, biological control with entomopathogenic nematodes has been developed by UF/IFAS in collaboration with USDA-APHIS.

Additional information about the Diaprepes root weevil can be found in the UF/IFAS publication Diaprepes Root Weevil.