The market continues to find ways to surprise and shock and sometimes make us happy and sometimes disappoint.  If it can, the market has a way of proving all analysts wrong at some point.

After trading over a $1.00 for the better part of the last almost 8 months, prices (December futures) have taken a late season unfortunate trek into the 90’s.  After a nice recovery from the June and July lows, prices have now again made their way back to the 90’s the past few weeks. 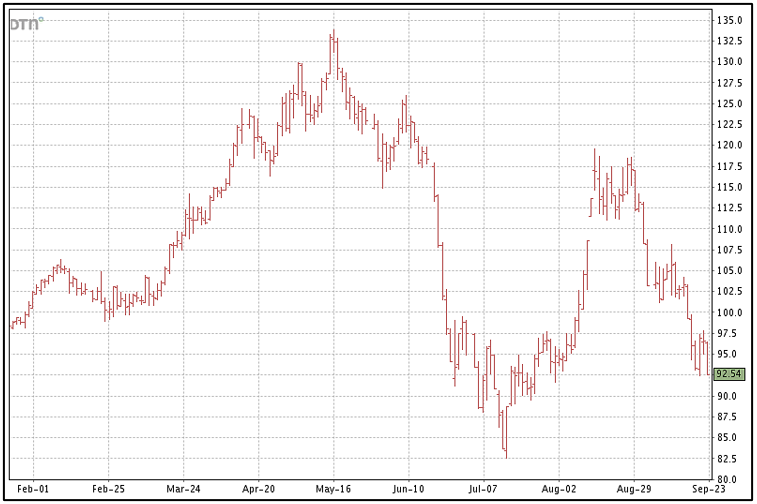 The US crop was increased 1.26 million bales in USDA’s September report.  A 600,000 bales increase in expected exports helped soften that blow but since then, prices have moved further down.

Additional losses have come due largely to worries and concerns about the demand side and the economy including:

Focus has shifted away from US and other supply and crop concerns to economic and demand concerns.

USDA’s October crop production and supply/demand numbers will be out on October 12.  There are still observers based on the “boots on the ground” that expect the US crop to decline.  The September report increase was based largely on a revision up in planted acres.  Some observers feel the Texas crop is still a question mark and there are expected, yet to be realized, weather related losses in both the Mid-South and Southeast.

With economic and demand concerns already, weak export reports do further damage.  There are plenty of crop concerns and uncertainty on the supply side yet to be dealt with including hurricanes and tropical storms.

Supply issues and a smaller US crop can help gain some of the price losses back.  But unless demand and economic concerns subside, we are still not likely to get back fully to where growers want this market to go for remaining 2022 crop pricing.  Further downside is possible.  Look at where we were back in July.  Any upside to come is likely to be tested at $1.00, then $1.05, and then $1.10.