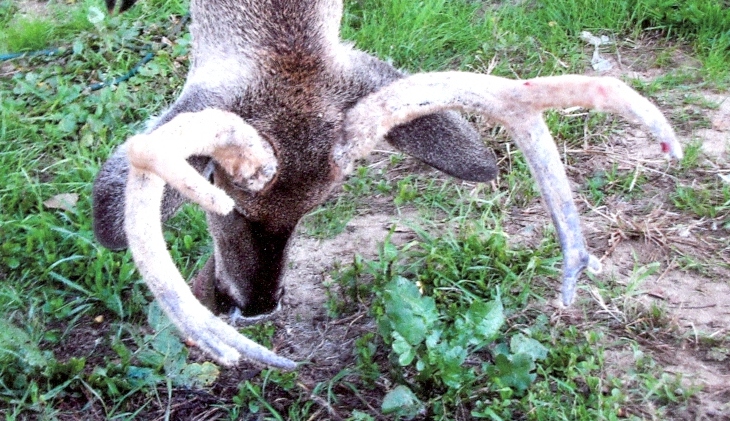 The reasons for abnormal antler growth often are unknown, and highly speculative. But there are three basic probable causes:

Normal testes development and related seasonal rhythms in male hormone (testosterone) production are essential if a buck is to grow normal antlers and maintain a normal antler cycle. Just as in the case of castrates and so-called antlered does, insufficient threshold levels of testosterone commonly lead to prolonged or permanent velvet antlers in otherwise normal appearing bucks. Such hormone deficiencies may result from disease, ingestion of toxic substances, certain nutritional deficiencies, injury to the testes, or numerous other factors that might alter a male’s normal physiology.

In northern regions, viable velvet antlers tend to freeze back during winter. In the South, however, continual growth of velvet antlers can lead to massive, tumor-like growths in some individuals. Such formations are known as a “peruke.” And individuals that grow them are commonly referred to as “cactus bucks.”

In addition to causing abnormally small antlers, poor nutrition may also lead to poor antler form. In large-antlered, normally well-nourished mature bucks, a sudden shortage of dietary minerals can cause the tines, or even main beams, to collapse.

For more details read the complete article from the White-tail Institute.