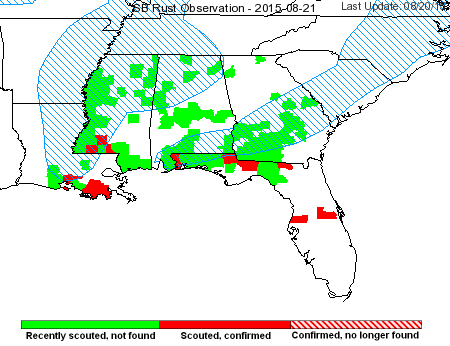 Soybean rust (SBR) has been found on the sentinel plot in Jackson County at the Extension Office.  Because these plots are scouted for SBR on a regular basis, the SBR was confirmed very early.  SBR has now been confirmed in Florida, Louisiana, Mississippi and Texas in 2015.

Soybean growers should consider a fungicide application, if weather conditions stay as they are.  Slightly cooler weather favors the spread of SBR, but it likes high humidity and rain showers. 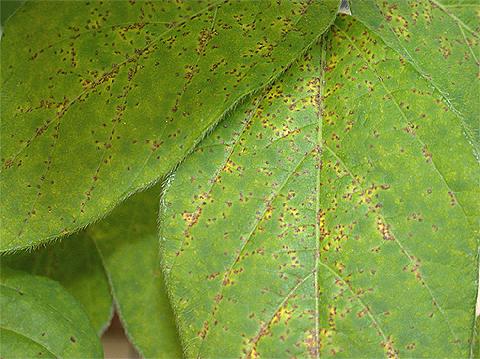 Brown-red lesions caused by Phakopsora pachyrhizi on the upper soybean leaf surface. Photo courtesy of U. S. Department of Agriculture

The first symptoms of soybean rust caused by Phakopsora pachyrhizi begin as very small brown or brick-red spots on leaves (Figure 2). Symptoms caused by P. meibomiae are similar to those of P. pachyrhizi, but this lesson will focus on P. pachyrhizi because most of the research and observations have been made with this species. In the field, these spots usually begin in the lower canopy at or after flowering, although seedlings can be infected under certain circumstances. Often the first lesions appear toward the base of the leaflet near the petiole and leaf veins. This part of the leaflet probably retains dew longer, making conditions more favorable for infection. Lesions remain small (2-5 mm in diameter), but increase in number as the disease progresses.
American Phytopathological Society 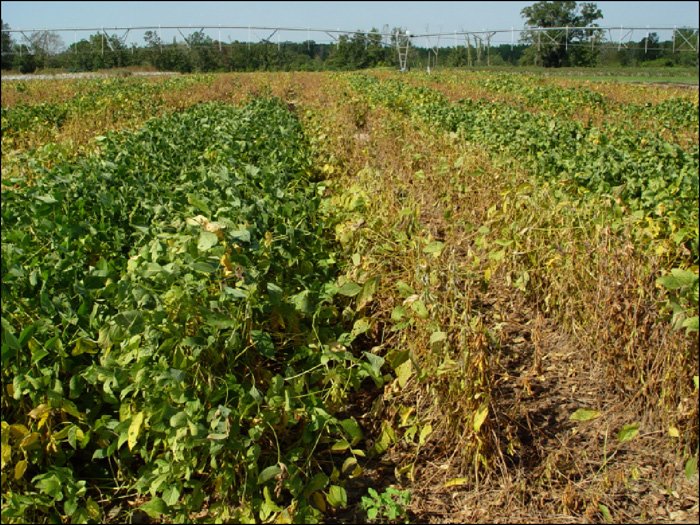 Soybeans infected and not infected with Asian soybean rust, caused by Phakopsora pachyrhizi, in a fungicide trial in Attapulgus, GA, 2006. Photo by R. C. Kemerait, Jr.

Dr. Kemerait, UGA Extension pathologist, shared the photo above from a fungicide trial he conducted on soybean rust back in 2006.  With heavy disease pressure, fungicide treatment is dramatic.  For the past eight years, SBR has not been a major problem in the Southeast, but conditions have been more favorable this year for disease development.  I recommend using a triazole, if soybean rust is already present in a field. If it is not present, use a strobilurin (Headline, Stratego, etc.) to control a wider variety of diseases. Spray if you find rust in your soybeans, or when soybeans start into the reproductive stage (R1 to R3).  Below are Dr. Kemerait’s bottom-line management tips for soybean rust.

To get all of Dr. Kemeraits recommendations for soybean disease control, download: