History of Conservation Tillage and Cover Crop Use in Florida

Growing up on a farm in Middle Tennessee allowed me to see firsthand why terraces, conservation tillage and cover crops were so important for preventing erosion.  Most farms had burley tobacco bases of 0.5 to 2 acres and pasture (usually fescue and clover).  Corn was primarily grown in river bottoms, or gently sloping fields that could be tilled without severe erosion.  In the 1960’s the local Soil Conservation Service (now NRCS) had an Allis Chalmers no-till planter that farmers could rent to plant corn.  Atrazine was introduced for commercial use in 1958 for corn, followed closely by Paraquat in 1961, which allowed growers to no-till summer crops for the first time, except for no-till planting into pastures.  By the mid 1970’s, Roundup was introduced, which provided effective grass control.  However, Roundup Ready crops did not come along until the mid-1990’s, which allowed growers to eliminate grass by applying Roundup over the top of growing crops.  While working on my PhD at Virginia Tech, I oversaw a reclamation research project that involved establishing vegetation on fills and cuts along the new stretches of interstate highways through the mountains of Virginia and West Virginia.  Establishing vegetation quickly was very important to establish root systems to stabilize soil to prevent erosion.  Slopes were so steep that little rainwater infiltration occurred, and so the cover crops had to grow under stressed conditions.  Rye was great for the cold months and millet for the summer heat and drought.  In the spring, crown vetch could be sown into the rye, which was later sprayed with Paraquat, thus controlling erosion while the vetch became established.

I came to the University of Florida in March of 1977, after earning my doctorate. Florida was in the middle of a drought that lasted until the first week of June.  There were about 750,000 acres of mostly non-irrigated, conventionally planted corn. The conventionally planted fields along the highways resulted in blowing dust and sand that limited visibility for motorists.  At that time, no-till was not being practiced in Florida and, very rarely, in most of the Southeastern US.  However, research using conventional tillage had shown that ripping in row to 10-14 inches deep couldn fracture the natural compaction layer of the soil to allow roots to explore below the shattered zone, which enhanced corn yields by 25-50 bu/A or more, depending on rainfall or irrigation. Dr. Raymond Gallagher had been doing research with strip-till rigs (coulters along with in-row subsoilers). The first strip till rigs in the late 1970’s were hard to adjust and needed more work to be perfected.  Jerrell and Leo Harden, two brothers from Alabama developed the first successful strip-till rig (in conjunction with Brown Manufacturing).  This basic design is still being used with some modifications to it. 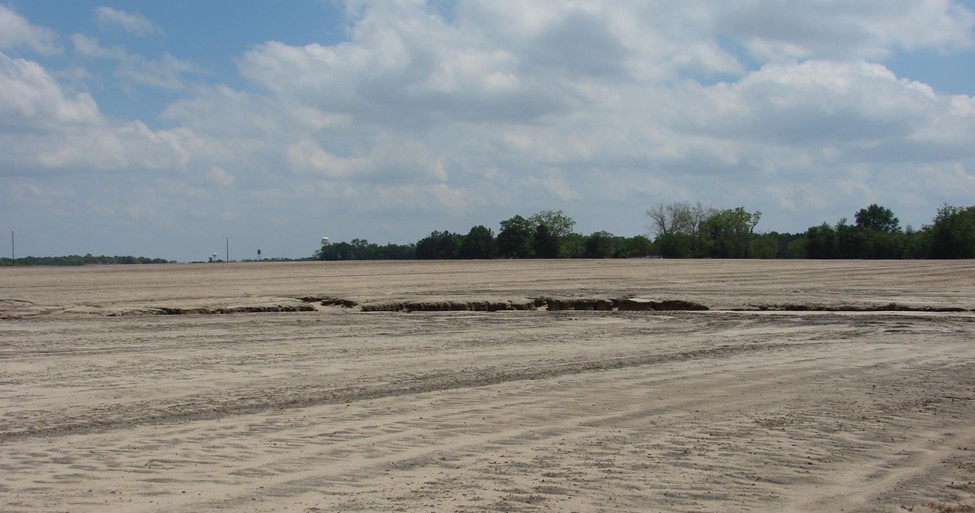 Much of our initial research focused on different cover crops and the use of starter fertilizers with strip tillage.  Dr. Ron Barnett released very successful wheat varieties in the early 1980’s, which led to 160,000 acres of wheat being grown in Florida, and opened the opportunity to double crop soybean after wheat harvest.  Dr. Woeste, Dean of Extension, supported our efforts to demonstrate strip-till planting on farms across the state with LET (low energy technology) funds for several years.  County agents Leonard Cobb, Ed Jowers and many others helped identify farmers who might be willing to try strip-till planting after wheat, and strip-till planted corn after winter grazing.  One of the first growers in the Panhandle to try strip-till corn following winter grazing was Larry Ford around 1980.  I asked Larry if we could have a small area for a demonstration and promised we would have a field day at harvest to introduce other farmers to the benefits of strip-tillage.  He said he had a field at Snow Hill (deep sand) under a pivot, half of which  he would let us use while the other half he would harrow like he normally had.  We had a two-row Brown-Harden strip-till rig, a small planter with a big field to plant. Within 3 weeks after planting, high winds and blowing sand decimated the corn stands in the conventionally harrowed ground, requiring replanting, while the corn strip-tilled into rye was unaffected, yielding 15-20 bu/A more than the conventional replanted corn. Following this, several growers became early adopters through the 1980’s using mostly small grain as cover crops to plant into.  Equipment for directed spraying was also being developed, along with weed wipers, and other specialized machinery.  The Food Security Act of 1985 targeted highly erodible lands, so USDA-NRCS’s EQIP programs began to incentivize strip-till adoption by helping farmers purchase strip-till planting equipment and other conservation technologies.

By the early 1990’s, we had the equipment to make conservation tillage work.  However, acreage did not explode until the mid-1990’s when Roundup Ready crops became available.  Within a year of the release of Roundup Ready varieties, almost 20% of the cotton was Roundup Ready.  Within two years, 90% of the cotton was Roundup Ready as were corn and soybeans.  This was the missing link that made growers comfortable using conservation tillage.  Finally they were able to control weeds without using tillage equipment.  The first years of over-the-top Roundup use had some of the cleanest crops that had ever been produced.  However, in the absence of residual herbicides with different modes of action to manage weeds, resistance to Roundup occurred within 7 years.  Many young growers, who had grown accustomed to farming without using residual herbicides, became concerned that many fields were not “clean” anymore.  Challenges to conservation tillage started showing up in the late 1990s due to shifts in weed species. This shift introduced “new” problem weeds like tropical spiderwort and horseweed on which Roundup by itself was ineffective.  A few weeds even became more tolerant to higher rates of Roundup. Researchers encouraged growers to use different modes of action of residual herbicides for longevity to slow resistance.  Other growers tested high residue cover crops or multi-species in blends that helped shade weed seedlings while also improving soil health. Some even used livestock and other management practices to keep weeds under control.

Our data over the last 45 years show that farmers can make good yields in conservation tillage systems for all major row crops.  Conservation tillage has been widely accepted by farmers for cotton, corn and soybean crops, while farmers have been slower to adopt strip-till for peanuts. Some of this reluctance has been due to weed resistance, especially for palmer amaranth. Nevertheless, many farmers have learned that with the right management, peanut yields can be as high with strip-till practices as with conventional tillage. 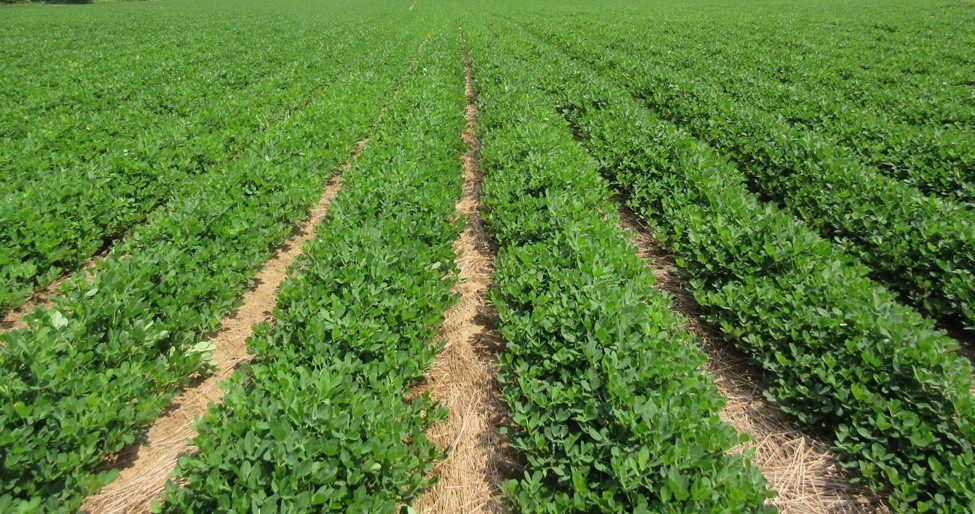 With the right management, peanut yields can be as high with strip-till practices as with conventional tillage. Credit: David Wright, UF/IFAS

Our data shows that integration of winter grazing in a peanut/cotton rotation is the next step beyond using mixtures of cover crops and the adoption of conservation tillage technology to minimize inputs and increase yields. Our long-term trial with winter grazing (oats/rye) followed by peanut or cotton shows that 40-70% less irrigation is required for both cotton and peanut. Cotton yields are higher by 150-400 lb/A with lower nitrogen requirements. There is near total elimination of aflatoxin in peanuts.  Our goal is to minimize soil disturbance, keep the soil covered every day of the year with a crop and to include livestock to increase organic matter, enhance nutrient retention and recycling and enhance microbial activity for improved soil health, water quality, and carbon sequestration.  These practices align perfectly with the principles of “regenerative agriculture” that is rapidly gaining importance with emerging carbon markets. These markets are a great opportunity for farmers to add finical incentive for leading the way in sustainable practices, while feeding and clothing a growing population.

Many people and organizations have helped advance conservation/sustainable/regenerative farming systems for the past few decades.  So, while it took years of research collaborating with innovative farmers to develop the best systems, we have expanded the use of cover crops/livestock integration and continue to study and implement new management techniques designed to keep both the soil and the farm economy healthy.

More information on this subject is available in the following University of Florida publications: