Progress of Carinata Research in the Panhandle 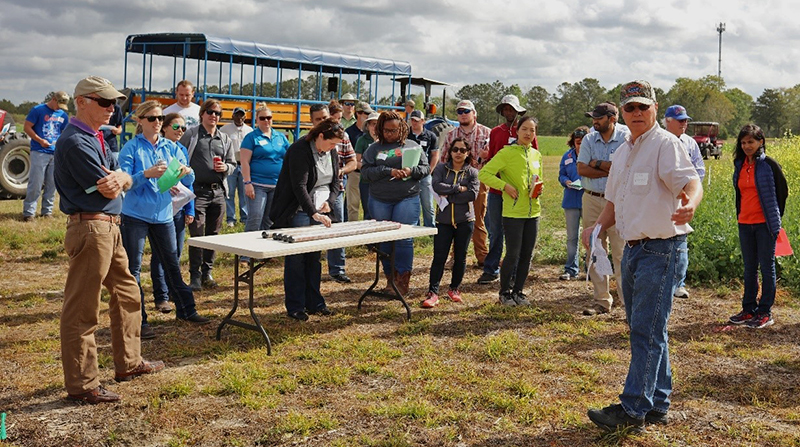 Carinata is grown primarily as a sustainable source of non-edible oils, which can be refined into renewable diesel and jet fuel. The meal or press cake left over after the oil is extracted can be utilized as a high protein source for animal feed. Carinata is a high residue crop that provides all the benefits of a cover crop, such as reduced leaching and soil erosion, suppression of weed populations, and improved soil fertility through the addition of organic matter. The crop also provides a food source for pollinators in late winter.

Commercial carinata production began in the Southeast with a few thousand acres planted in the Florida Panhandle between 2014 and 2018. During this period, best management practices, including planting date, nutrient, weed and disease management, harvest management, and improving the rotational fit of carinata in traditional rotations in the region, were researched and developed.

In addition to the cover crop benefits, carinata has shown significant promise for producers in the Southeastern US by providing an opportunity for additional income from double-cropping carinata in the offseason. Analysis conducted by Marshall Lamb at USDA using the WholeFarm model demonstrated that carinata could fit into diverse crop rotations. Carinata costs about $300 per acre to produce, with an average net income of $180 per acre. In the same analysis, the breakeven yield was 1900 lb seed or 38 bu per acre, while the breakeven price was $5 per bushel. 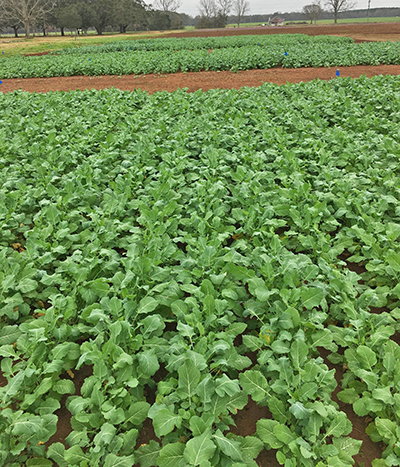 Carinata is an aggressive crop that will outcompete many winter weeds. A healthy stand of carinata approaching the canopy closure stage in late January 2021 at WFREC, Jay, Florida. Credit: Mike Mulvaney, UF/IFAS

Before planting carinata, a grower has to ponder several questions. Will it impact the summer crop, is the land suitable for carinata production (soil type, fertility, pesticide residues), can the crop be planted, managed, harvested on time with available equipment, and not interfere with the following crop? Research across the Panhandle has demonstrated that carinata can be successfully grown in our region; however, producers need to plan ahead. Carinata should not be grown every year in the same field but once every three years to reduce disease. Crop rotation is an important strategy in managing diseases such as Fusarium and Sclerotinia. Carinata fits well into rotations after other summer crops and can be double-cropped with soybean and sorghum. Carryover of ALS-inhibitor (Group 2) and PPO-inhibitor (Group 14) herbicides from cotton or peanut rotations could impact carinata stand establishment and development, so it is critical to consider the herbicide history of the field before planting.

With good management, carinata can be produced on all types of well-drained soils. The crop can produce up to 40% greater yields on medium to heavy textured soils. Deep sandy soils will require higher nutrient rates in more frequent applications, which is neither economical nor sustainable. SPARC scientists are evaluating poultry litter as an organic N source to offset the use of inorganic N in different soil types. Developing shorter season carinata varieties would allow for double cropping as a winter crop in cotton and peanut rotations. Carinata variety testing results from two growing seasons in the Panhandle showed a yield range of 2500 to 3000 lbs/A, and with a total oil content range from 42.0 % to 52.4 % (Kumar et al, 2020). We are currently testing the performance of novel hybrid cultivars across the Southeast, including the Florida Panhandle, to identify high-performing varieties that are yield-stable across locations and years. Rick Bennett, Plant Breeder at Nuseed Carinata said, “Identifying lines with higher levels of resilience to frost, particularly during the vegetative stage is a priority. The development of earlier maturing varieties is also an important objective, so that carinata fits into current warm-season crop rotations.” Hybrid carinata planted across the Panhandle (Jay, Quincy, and Live Oak) in November 2020 survived several hard frost events lasting more than 8 hours with minimal injury and is currently at the bolting or prebolting-stage. 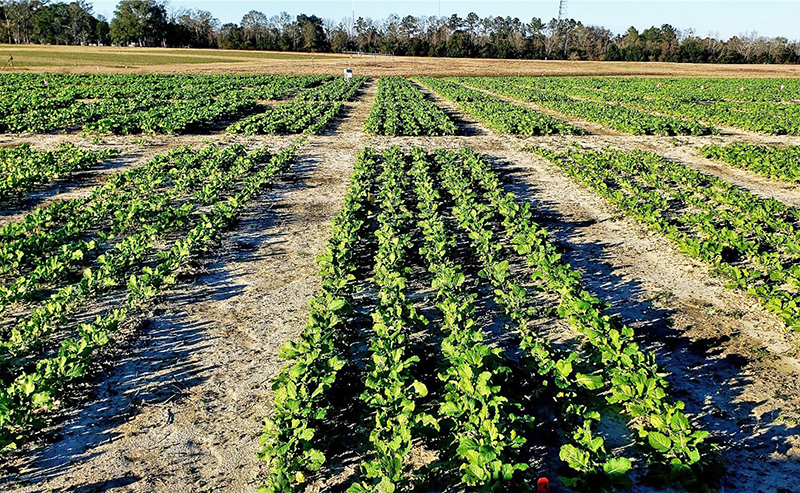 The demand for sustainable aviation fuel, diesel, and high protein feed meal from dedicated bioenergy crops is real and projected to grow. However, incentives (cover crop incentive, carbon monetization), crop insurance, local infrastructure development (crushing facilities, etc), are needed for systematic scaling in Florida and the Southern US. Meanwhile, Nuseed is interested in ramping up oil production to approximately 200,000 metric tonnes of seed over the next few years, if there is adequate acreage planted in the region. SPARC researchers will continue to provide research updates on carinata production as more progress is made.

For more information, go to:

Carinata, the Sustainable Crop for a Bio-based Economy: 2018–2019 Production Recommendations for the Southeastern United States