What are the White Spots on my Blueberries? Exobasidium Fruit Spot 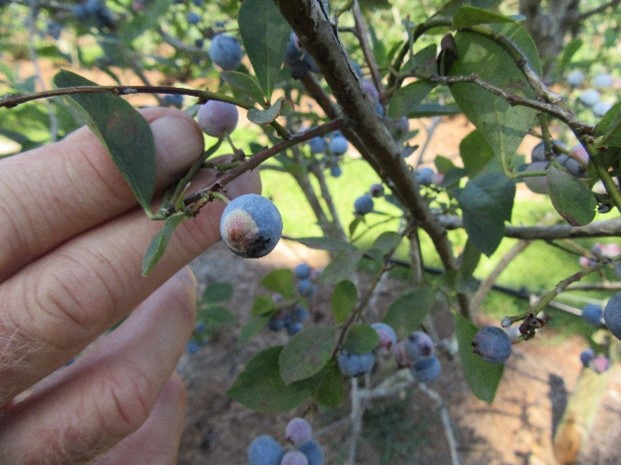 Blueberry growers should be on the lookout for fungal disease spots on leaves and fruit such as these discoverd in Jackson County recently. Photo credit: Ashley Kush, UF/IFAS

Have you noticed spots on your blueberry plants and fruit lately? There is an emerging fungal disease on blueberries in the Southeastern US.  Exobasidium leaf and fruit spot is a fungal disease is caused by Exobasidium maculosum, a new species of fungus first described in 2014.  This disease rarely affected blueberries in the past, but it is becoming a more common problem that threatens the sale of fruit rendering them unmarketable, as the defects cause buyers to reject the fruit.

Exobasidium leaf and fruit spot of blueberry is an early season, cool weather disease. This disease affects several cultivars of rabbiteye (Vaccinium virgatum) and southern highbush (Vaccinium corymbosum) species.  Multiyear data has indicated that Exobasidium maculosum overwinters on the surface of buds and shoots.  In years with extended periods of rain and/or cloudy weather, infection of new growth is more likely.  Studies show that these events may suggest that the primary start for the disease is splash-dispersed. 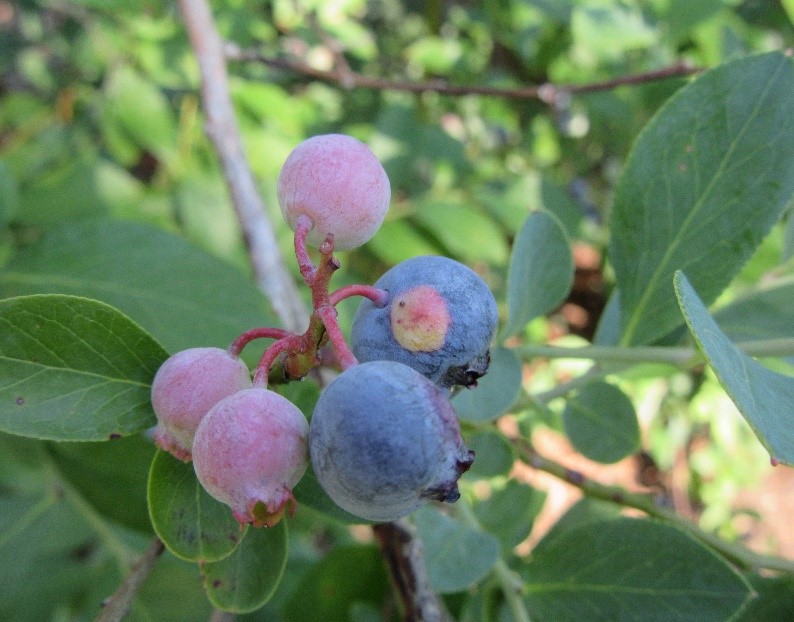 This fungal disease causes green and white spots on blueberries.  Spots are 2 to 10 mm in diameter and tend to be circular in shape.  Infected fruit with a severe infection may cause premature fruit drop, and infected plants generally have smaller fruit than noninfected plants.  Exobasidium berries can be eaten, but they are chewy or hard where the spot occurs.  The spots do not ripen well and remain firm.    It can make the berry smaller and give it a bitter taste due to the fruit’s immaturity.

Beginning in early Spring (late March to early April) small light green to yellow circular spots can be found on the upper leaf surface.  One of the diagnostic characteristics of the disease is a dense, white fungal growth that can be found on the underside of leaves. Over a course of one to two weeks the spots can expand up to 10 mm in diameter. Less common than leaf and fruit spot symptoms, this disease can also form on young, actively growing shoots early in the season.  This damage could result in girdling of the infected shoot with the shoot tissue becoming white and raised. 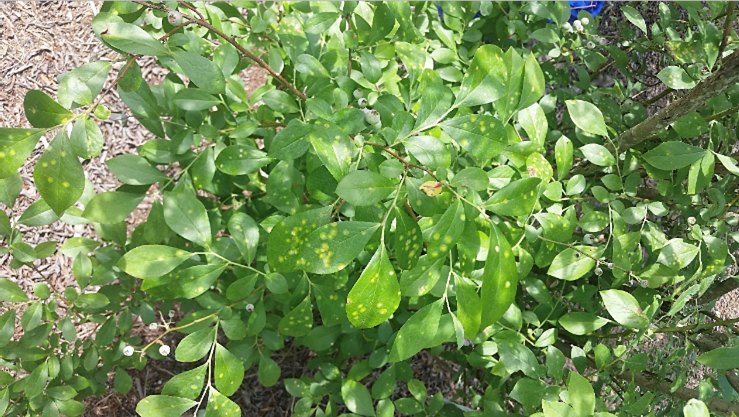 There are both cultural and chemical controls that could help with Exobasidium.  One suggestion is improving drainage to reduce standing water in problematic locations in your field.  This could be very beneficial in reducing the disease.  Anything you can do to increase air circulation in your plants will also result in better drying of stems, leaves, and fruit.  Adequate summer pruning and winter basal pruning are critical as a cultural controls.  Overhead irrigation can cause splash dispersal, which creates ideal conditions for new infections.  When possible use drip or emitter irrigation to reduce moisture on foliage and fruit.  It is important to note that equipment should be thoroughly cleaned before moving from field to field.  Some of the more susceptible varieties of rabbiteye are ‘Premier’ and ‘Tifblue’. ‘Star’ and ‘Legacy are two southern highbush varieties that have also been reported to be more susceptible to this disease.

The current recommendation for chemical treatment for Exobasidium is to apply calcium polysulfide (lime-sulfur) during the late-dormant period of plant development.  This is approximately two weeks prior to bud break.  There are several studies out of Georgia that show that even a single application of lime-sulfur during this period of development has shown to control in-season disease on both leaves and fruit.  Other fungicides such as Captan and fenbuconazole have shown moderate effectiveness when applied at bud break and during bloom.  It is important to note that applications of Damoil (dormant oil) can have a negative effect on Exobasidium.  Jonathan Oliver, Fruit Pathologist and Extension Specialist, University of Georgia, states “Often, growers are applying Damoil, or dormant oil, during the dormant period for scale insect control.”  “When [lime sulfur and Damoil] are applied within two weeks of each other … the application of the Damoil can negatively impact the control [of Exobasidium] provided by the lime sulfur treatment.”

If you have questions about your specialty crop, contact your local county UF/IFAS Extension Office and talk with the Horticulture Agent.  For disease diagnosis and confirmation, samples of infected berries and leaves can be sent to the UF/IFAS Plant Disease Diagnostic Clinic in Quincy, or the UF/IFAS Plant Diagnostic Center in Gainesville, FL. 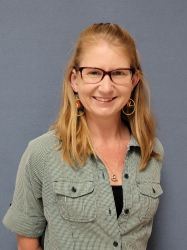