What are those Winding Paths in Crop Leaves? 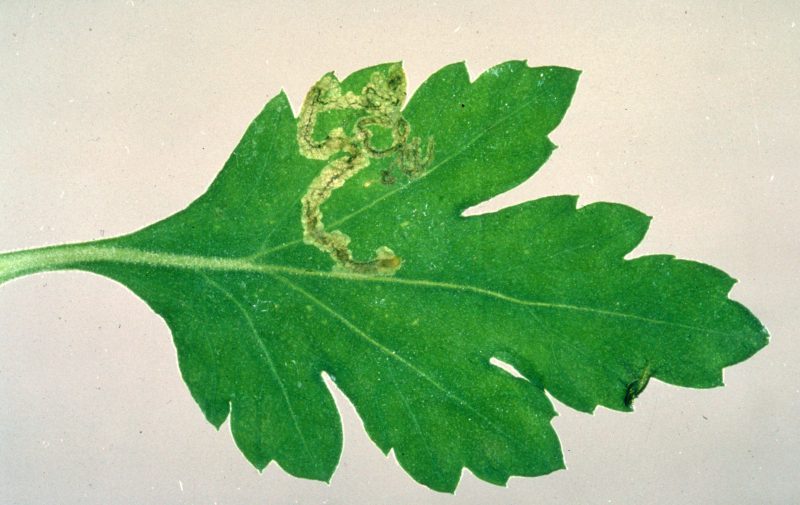 A mine of the American serpentine leafminer on a chrysanthemum leaf. Photo by Central Science Laboratory, Harpenden, British Crown, Bugwood.org.

Have you ever noticed what looks like little winding squiggly paths through the leaf surface of your vegetable crops? If so, then you likely had a visit from leafminers.

The most common leafminer species we encounter in our Florida vegetable crops are vegetable leafminers (Liriomyza sativae) and American serpentine leafminers (Liriomyza trifolii). Luckily, these insects usually do not cause severe harm.  However, they can damage the edible leaves of crops by creating tunnels within the leaf tissue as they feed and major infestations can interfere with photosynthesis. 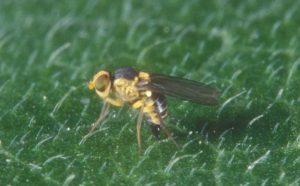 Like the name implies, the American serpentine leafminer creates snake-like paths of winding mines through the surface of plant leaves. Although not as aptly named, vegetable leafminer damage is very similar in appearance and cannot be used to differentiate the species.

So, what are leafminers exactly? A leafminer adult is a very small fly (Diptera insect family), measuring less than two millimeters in length. Both vegetable and American serpentine species are yellow and black in color and can be hard to distinguish with the naked eye. The only noticeable differences are that the vegetable leafminer has a shiny black upper thorax (middle segment) and dark eyes, while the American serpentine has a grayish black upper thorax and eyes with yellow margins. 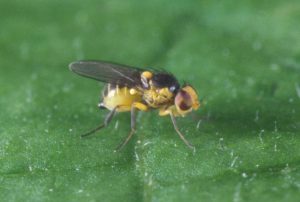 Adult female leafminers can insert about 30 to 40 eggs individually into leaves per day. The larvae feed and develop within the leaf tissue, causing more damage as they grow, for two to three weeks before dropping to the soil to pupate. Adult leafminers then emerge from the soil as flies within one to two weeks. Although present year-round, they are most active from March to June, with up to 10 overlapping generations per year, moving from one host to the next throughout the seasons.

Along with reducing photosynthesis, excessive leafminer damage can cause premature leaf drop, and egg entry point wounds can aid the spread of bacterial and fungal diseases. Fortunately, there are many natural enemies of leafminers, including at least 14 parasitoid wasp species, which can help keep their populations in check. Chemical insecticides are not generally recommended for leafminer control, as insecticide resistance is a major problem and can severely disrupt parasitoid populations, creating an even bigger leafminer problem. 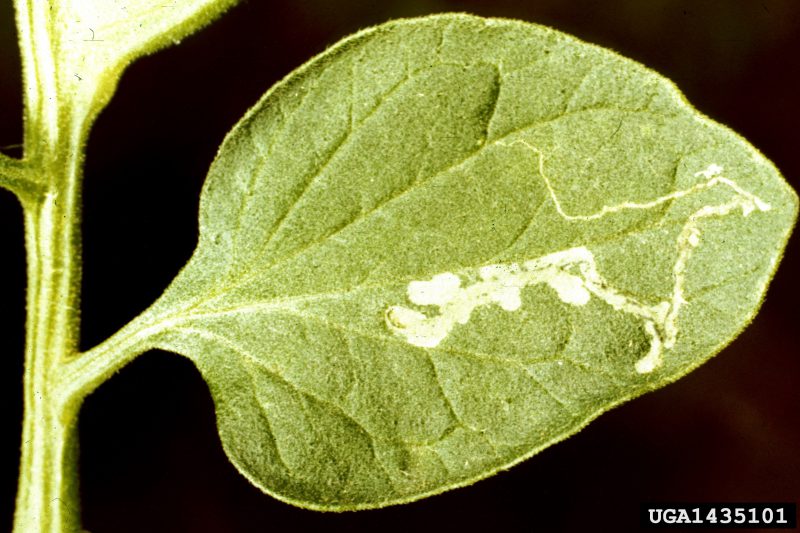 A mine of the vegetable leafminer on a tomato leaf. Photo by Clemson University – USDA Cooperative Extension Slide Series, Bugwood.org.

Overall, both vegetable and American serpentine leafminers are relatively minor threats to crop yields. Efforts made to support natural enemies and rotate crops within a field can help keep their populations below action thresholds.

For more information, see the UF/IFAS Featured Creatures publications about each of these insect leafminer species: