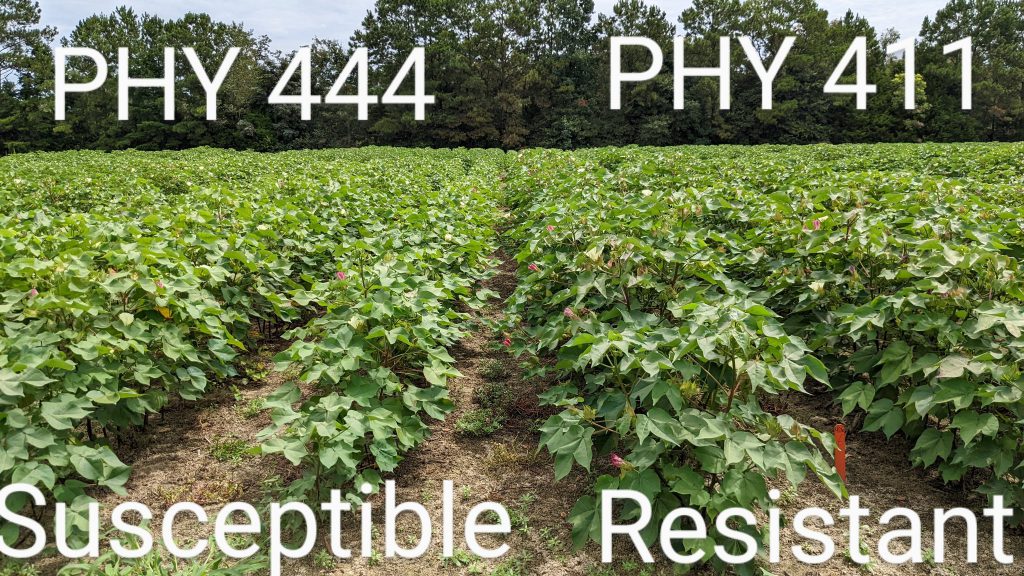 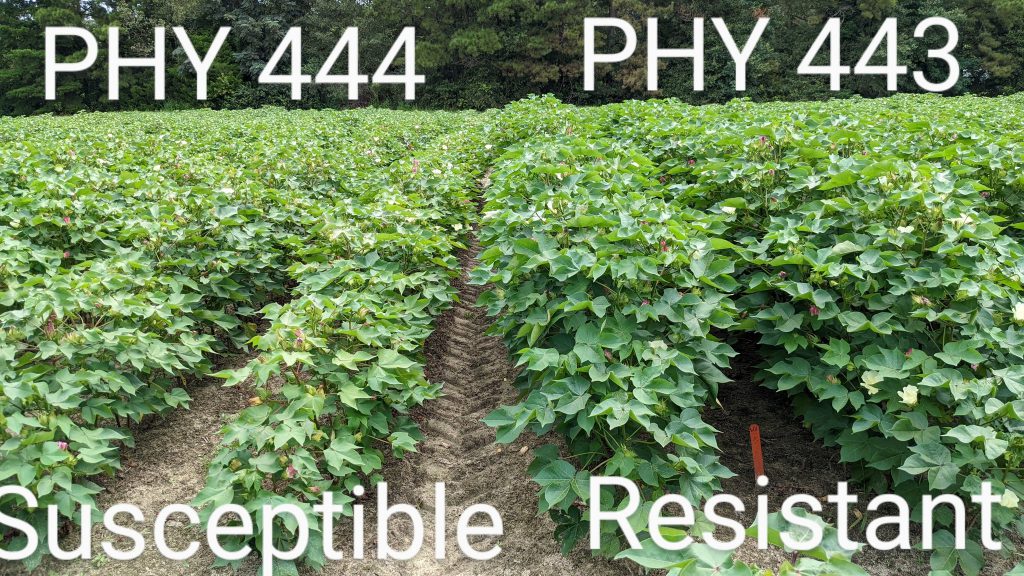 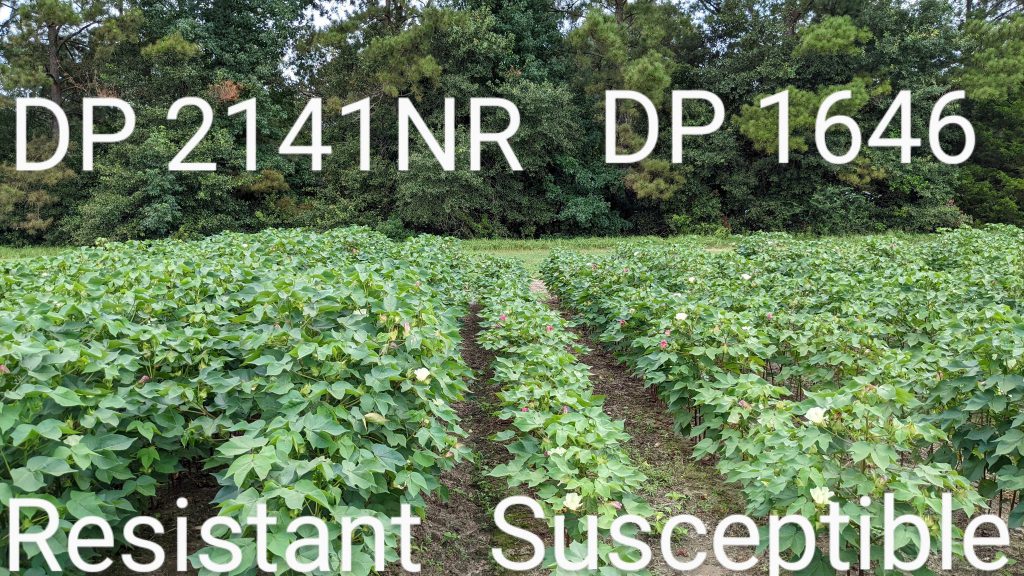 In peanut, resistance to peanut root-knot nematode (the major nematode pest in peanut) has been available since the release of Tifguard in 2008. However, variable yield potential, seed purity issues, and other factors limited the market for that cultivar. Since then, two high oleic cultivars, TifNV High O/L and Georgia 14N that share a nematode-resistant background with Tifguard, have been released. In particular, TifNV looks to be the market choice for a resistant cultivar as it has more reliable yield potential than prior resistant cultivars. TifNV has a very high level of root-knot nematode resistance and holds yield well under high nematode pressure. In research trials over the past two years, we have been comparing TifNV performance relative to a susceptible cultivar (Georgia 06G) with conventional nematicides and look forward to reporting those results this fall. Figures 4 and 5 illustrate that resistant TifNV has greater canopy coverage than susceptible Georgia 06G in small plot field trials at Live Oak and Citra this year. 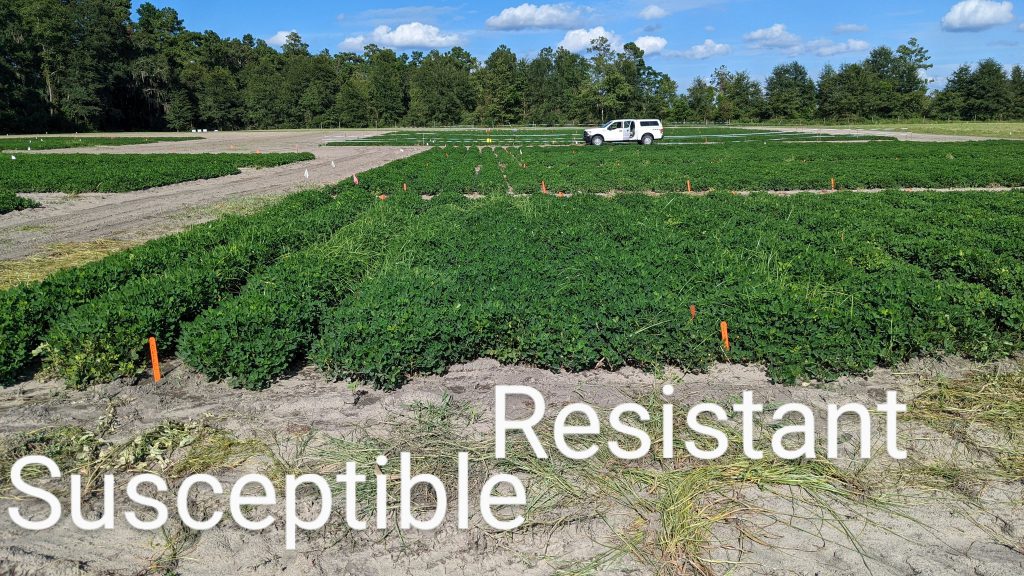 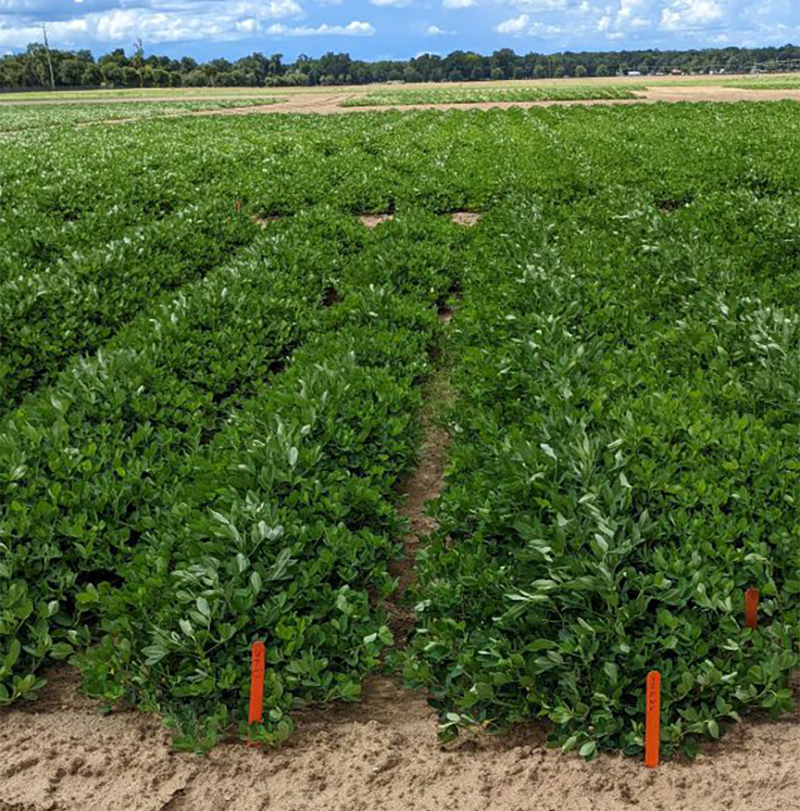 Recently, the resistance genetics in runner peanut have been introduced to Virginia peanut, culminating in the release of Georgia 19HP and TifJumbo. Due to some interaction with local Virginia peanut growers and Georgia peanut breeders, we initiated a small plot trial at Citra this year to test these resistant cultivars, along with a typical susceptible cultivar, Bailey II, with and without Velum nematicide. That trial is ongoing, but preliminary results have shown interesting results. Either the resistant cultivars or nematicide reduced nematode infection at midseason relative to the susceptible without nematicide (Figure 6). Despite this, canopy growth has been more vigorous with Bailey II than the resistant cultivars (Figure 7). This is likely due primarily to agronomic traits as Bailey II tends to have vigorous vine growth, such that growers have requested cultivars with less vine growth, so they are easier to harvest. 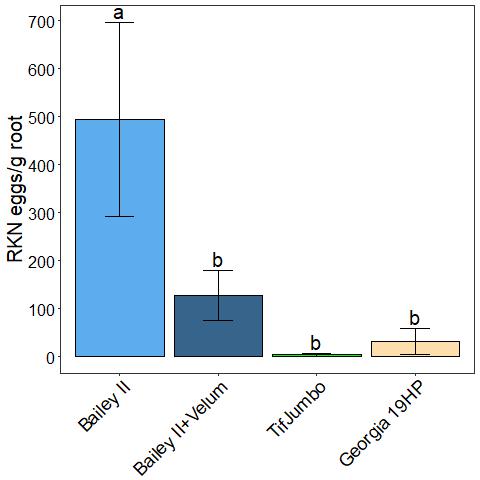 Figure 6. Root-knot nematode infection in peanut roots at 42 days after planting in small plot trial at PSREU near Citra, FL. Letters indicate that nematode populations were significantly greater (Fisher’s LSD, P<0.05) for Bailey II than other treatments. Bailey II is root-knot nematode susceptible, whereas the other two cultivars are resistant. 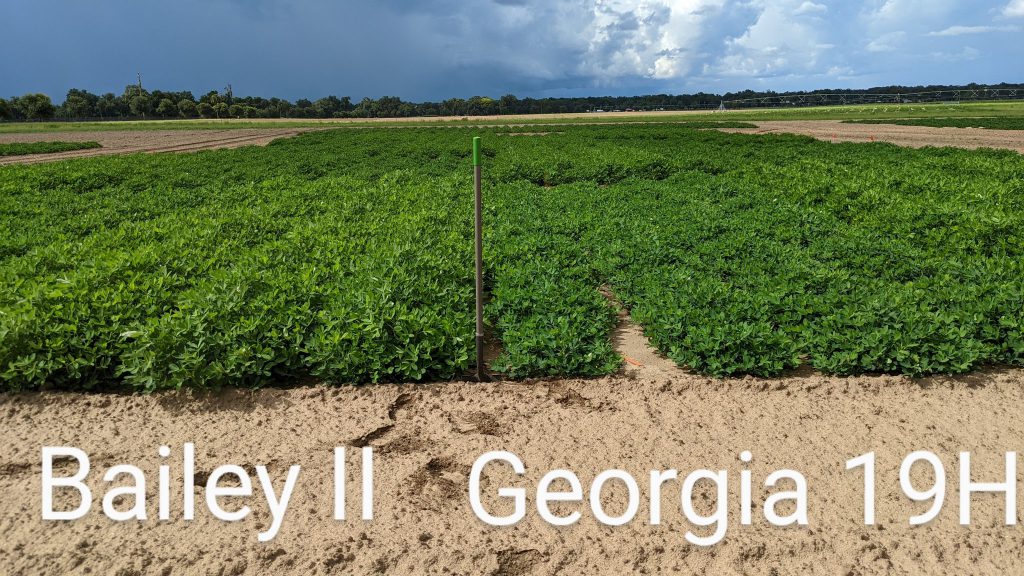 As mentioned above, testing of all of these resistant cultivars is ongoing and we look forward to sharing more results in the upcoming months. As the 2022 growing season begins to wind down, consider nematode-resistant cultivars as part of your nematode management strategy in cotton and peanut for 2023.

For more information on nematode management in peanut and cotton, see the following UF/IFAS publications: