Herbicides simplify weed management by allowing you to cover extensive areas in a relatively short time, and reduce the need for time-consuming control practices such as hand weeding. Additionally, many herbicides have the advantage of selective control. Selective herbicides are those that kill weeds without significantly injuring the desired plant. In turfgrass, selective herbicides are particularly important because we do not have the option of using cultivation or non-selective herbicides, as is commonly done in other agricultural systems such as row crops and orchards.

Over the last few summers, there has been an increase in complaints about herbicide injury on sod farms, golf courses, and home lawns after applications of herbicides, especially during the summer months. Many of those complaints originated from situations in which the application was done properly, using the recommended label rate, and thus the level of injury observed was not justified. After studying all these cases, it was determined that at the time of herbicide application the turf was under a moderate level of stress, but not high enough stress to cause visible symptoms. However, when the herbicide was applied the combined effect of the existing stress, and the stress caused by the herbicide made it harder for the turf to maintain the desired quality. For example, Figure 1 below shows that the turf looked fine before the application (A), but after the herbicide was applied, there was a significant loss in turf cover and quality (B). The interesting aspect is that the injury was not present across the entire treated area, but only on patches (C). Those patches corresponded with sand pockets where soil moisture, especially on hot days, was considerably lower than the rest of the area. In that particular case, the irrigation system was providing enough water to help the turf tolerate the moderate stress of high temperatures and limited moisture, but not enough for the turf tolerate the combined stress that occurred after the herbicide was applied. 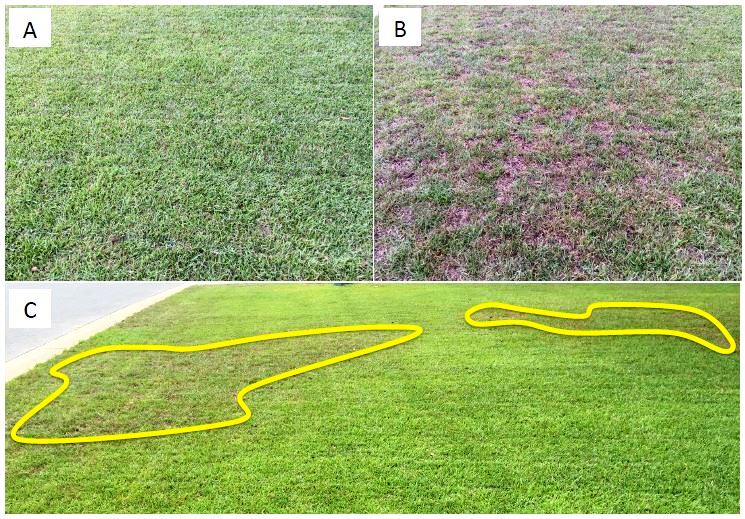 Figure 1. Centipedegrass growing during the summer in Florida before herbicide application (A), 3 weeks after herbicide (sulfentrazone and metsulfuron-methyl) application (B). Herbicide injury pattern with highlighted areas showing where sand pockets caused drought and heat stress that contributed to herbicide injury (C).

In Florida, there are a combination of environmental factors such as high temperatures and sandy soils that can create stressful conditions limiting turfgrass growth, especially when irrigation is not sufficient to keep the turf hydrated.  Furthermore, we also experience periods of excess rainfall, and areas of turf growing under shade. Additionally, pest problems that affect roots and leaves are frequently found in our state. All these conditions affect turfgrass health and its ability to tolerate herbicide applications. For these reasons, turf producers and managers need to be proactive to help turfgrass overcome the injury that herbicides might cause. To achieve this goal, you need to follow five simple steps:

1) Identify weed problems early. Most weed problems will start in the spring for summer weeds and in the fall for winter weeds. Controlling them when they are small not only increases the effectiveness of our applications, but also allows us to implement our control when the turfgrass is less likely to be stressed.

2) Make sure irrigation is adequate (increase frequency or duration if needed) for up to three weeks following application.

3) Reduce mowing frequency and increase mowing height 0.5 inches for up to 3 weeks following a herbicide application, to allow the turfgrass to continue producing energy to support its recovery. Mowing too short and too frequently immediately after the application weakens the turfgrass.

4) Fertilize with a small amount of nitrogen (0.25 to 0.5 lb N/acre) a week or two after herbicide application to help the turf recover and produce new leaves.

5) If the turfgrass is suffering from serious pest problems (pathogens, nematodes or insect infestations) do not apply herbicides on the affected areas until the turfgrass has recovered.

Maintaining optimal turfgrass growth is the best way to ensure that herbicide applications will maximize weed control while still protecting the health and aesthetics of your turfgrass.

For more information on growing turfgrass in Florida, please see the following: