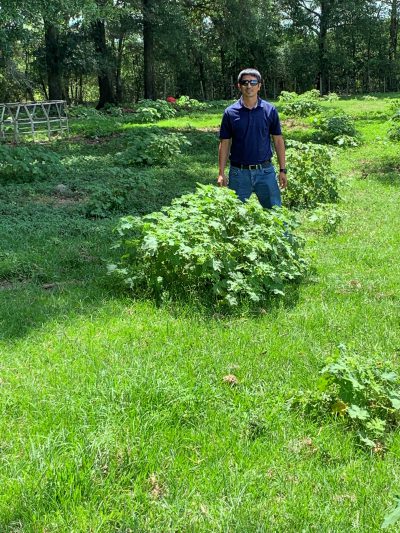 In December 2018, I reported mature/fruiting Tropical Soda Apple (TSA) in Northern Santa Rosa County. For the first time, however, I have documented this invasive species surviving a Santa Rosa County winter.

Geographically, the prevalence of this weed has been highest in South Florida, although the plant is now commonly observed throughout the state. The highest incidence of TSA has occurred in improved pastures, such as Bahiagrass, with an estimated 1 million acres infested in Florida, again mainly South Florida.

Prior to the 2018-2019 winter, isolated outbreaks of TSA had been found near receiving pens used by feeder cattle being brought up from South Florida. Another instance was a mature cow that was purchased at a local livestock market. That cow had obviously made a quick trip up from South Florida and went straight on to local pasture. In both of these scenarios the TSA seed was most likely “planted” wth the manure of the arriving cattle. TSA seed can remain viable in the digestive tract for up to six days.  Just one more example of why it is important to quarantine newly purchased animals. When you buy cattle remember it is very possible that they came from a TSA infected area, so you should hold them in one area for up to six days to avoid the spread of TSA to other areas of your ranch.

This is the first official report of TSA surviving, thriving, and reproducing on its own in Santa Rosa County. The original plants were identified in a producer’s pasture in late fall 2018 with mature fruiting structures. This pasture has a fence line adjoining a wooded area. Upon investigation, we discovered that deer, raccoons and other wildlife are actively involved in transporting the seed of this weed to other locations (see photo).

Producers need to be aware that this invasive weed has established in the western Panhandle, and should be diligently scouting for this weed.  TSA should so be eliminated as soon as possible. It is highly aggressive, a prolific seed producer, and can be readily spread when livestock and wildlife consume the fruit.

For more information, please refer to these publications:

Tropical Soda Apple: Biology, Ecology, and Management of a Noxious Weed in Florida

Weed Management in Pastures and Rangeland—2019