Recently, two teens were victims of unusual shark attacks in North Carolina. The two attacks occurred within minutes and miles of each other. A similar incident happened in the Florida Panhandle in 2005. One teen lost her life and one lost his leg. The attacks were within days of each other and the distance between the two attacks was less than 100 miles. Experts identified Bull Sharks as being responsible for both Panhandle shark encounters.

Bull Sharks migrate north as ocean waters of the Gulf and Atlantic warm. As the nearshore environment cools in the late fall and winter, Bull Sharks follow the receding warm water and eventually move out of the local area. Bull Sharks are an aggressive shark responsible for a reported 100 attacks on humans resulting in 21 fatalities. (Reported from 1580 to 2014 Source: International Shark Attack Files).

Experts suggest Bull Sharks may be responsible for many shark attacks where the species is unknown or not identified.

Overall, the number of shark encounters is slowly trending higher as more people swim and participate in other water related activities. However, negative encounters with sharks remain a rare occurrence. In 2014, Florida reported 28 shark bites with no fatalities. On average, only one shark attack fatality is reported every other year in the United States. The risk of shark attack is very low compared to other potential recreational hazards. For example, in 2014, 26 people died as a result of lightning strikes in the United States, with six of those being in Florida.

George Burgess with the International Shark Attack File has compiled a list of action strategies you can use to reduce the chances of a negative encounter with a shark:

Keep these tips in mind the next time you hit the beach!

Our beautiful Emerald Coast is an alluring wild habitat. Simply put – Swimming at the beach is not the same as swimming in a backyard pool. Have fun at the beach but be mindful and respectful of potential hazards. Knowing what to do to be safe will actually help you enjoy time at the beach while keeping worry and concern at a minimum. Follow these beach safety tips for helping your family enjoy the beach while protecting coastal wildlife. 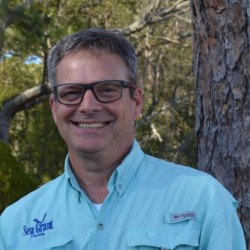