Silverside Minnows of the Florida Panhandle

Based on our seine surveys along the beaches of most estuaries in the Florida panhandle, this is one of the most abundant fish in our bays.  No matter the time of year, or the location, estuarine seining usually includes numerous individuals of this group.  It is very apparent the importance they play in the food web of our local bays.

Those visiting and recreating in our waters probably are not aware of the numerous individuals of this fish schooling all around them.  They are almost transparent and are often called “glass minnows” because of this.  So, you do not really see them – even if you are snorkeling.  But take a small hand net or a seine net and you will quickly discover they are there – and a lot of them.

They are small three-inch fish that are long, and tube shaped with forked (lunate) tails.  Their bodies have a slight yellow-green appearance on the dorsal side, but much is a whiteish in color or transparent all together.  They do have a broad silver stripe that runs laterally along their body and is where they get their common name “silversides”.  Anchovies also have this “silverside” and are found in the same locations but differ from the silversides in that they have a more “shark looking snout” and only one dorsal fin, compared to the two dorsal fins found on the silversides.

It is apparent this whiteish, transparent color and silver stripe are effective in avoiding predation.  Again, you and I do not see them while we are snorkeling.  But is also apparent that many are consumed due to the large number you find in their schools.  I have found from my seining surveys this fish is often collected on days when no other species are.  The heat of summer, the cool of winter, during and after storms, high humidity, it does not matter – I always captured them.  I have captured them over sandy beaches, over seagrasses, near jetties, and in the muck and mire of salt marshes.  They are literally everywhere.  I also capture them more frequently than I do anchovies, suggesting their importance to the health of the estuarine food web. It is one of the first fish my students learned to identify because of how frequently we caught them.

The Tidewater Silverside (Menidia beryllina) is smooth to the touch because their scales lack serrations.  Other than that, these two fish look very similar.  Tidewater silversides seem to be restricted to the shorelines and do not venture to the extended grassbeds off the beach.  The third species mentioned M. peninsulae, is reported to prefer salinities at and above 19 ppt, where the tidewater prefers lower salinities.  There is little else mentioned to distinguish these two, but I have seen both names reported in the scientific literature from researchers sampling our bay.

Both species of silversides have a large biogeographic distribution.  Ranging from the colder waters of New York, all along the eastern seaboard, and the entire Gulf of Mexico.

You may not see them often, but know they are an important part of the estuarine ecology. 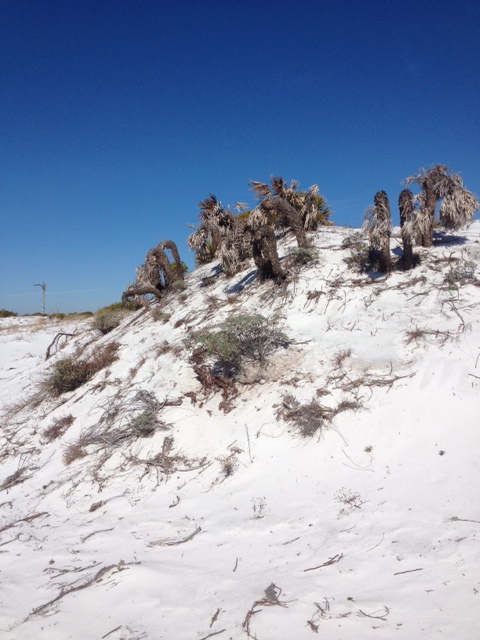 Making the Big Sabine hike on Santa Rosa Island in February was COLD! A front had pasted over the day before and temp was in the 30’s with a north wind. But the sky was a beautiful blue and the Gulf was calm and clear. 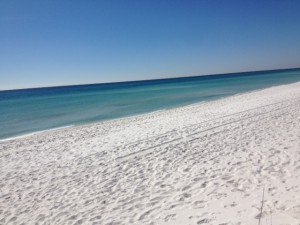 The Gulf is smooth and clear most winter mornings. 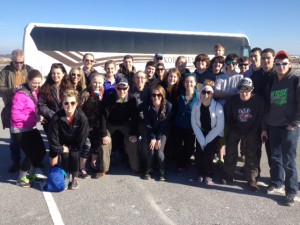 Joining me on my hike this month was the Wildlands School from Wisconsin. They were visiting the Gulf Coast working on a variety of projects and wanted to learn more about coastal ecology… so I brought them along. Because of the drop in temperature we did not see much wildlife. In January I saw very little other than birds. In February we saw few birds… it was really cold. As we hiked from the Gulf to the Sound we discussed barrier island and dune formation and showed many of the plants common in the different dune fields we mentioned in our January issue. Most were brown in color but there were a few evergreens and we even had one secondary bush blooming! Beach Heather (Conradina canescens). 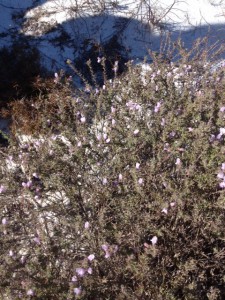 Beach heather (Conradina canescens) blooming early in the year on a cold morning.

We did see a few mammal tracks and had a chance to discuss “animal sign” with the students, but no live animals were seen. The kids from Wisconsin were introduced to cactus (literally… many had it on their shoes) as we walked through the maritime forest and I had a chance to explain the xeric conditions found on our barrier islands and how this favored particular plants and animals. While in the maritime forest we also came across an old aquaculture facility and this gave me a chance to discuss this industry as well. But for me the most interesting discovery in the maritime forest was a “drag-line” that I had found in January near one of the ponds. As we walked past this area again – it was there again and seemed to be “fresh” (recently made). I am not sure what makes these drag marks – have a few guesses – but am hoping to discover the source before the end of this series. 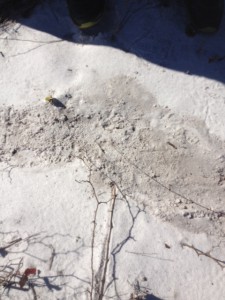 Strange drag marks we have seen each month so far. They are found near one of the ponds on the Sound side.

Despite the north wind the Sound was calm and clear. Most of the marine creatures had moved into deeper-warmer waters but we did find a dead cannonball jellyfish. The students from Wisconsin got a chance to hold the slimy creature and we discussed how the stinging cells (nematocyst) work. These small cells on the tentacles of jellyfish have a triggering mechanism that is actually discharged by the object that touches it… the jellyfish does not do this. Once the trigger is moved a dart with a drop of venom is discharged into whatever triggered it. Several of these firing at once is what causes the pain we feel, or the death of a small fish. They were also excited to discover a primitive camp site that locals use. I explained the correct protocol for doing this and hope that locals do the same. 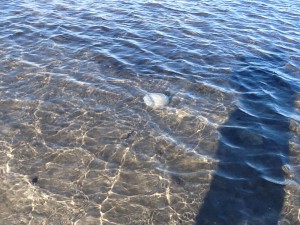 I found this along the shore last winter. These are cannonball jellyfish.

Though there was not a lot of wildlife to view in February but the beach is absolutely beautiful this time of year. The sunrises and sunsets are amazing. I encourage local “panhandlers” to visit your local island and take a long walk. I think you will enjoy it.

Holiday dinners usually feature ham and turkey. You may start having left-over sandwich nightmares after eating turkey for the next six weeks! Many Florida families choose fresh seafood as a delicious and healthy addition to their traditional holiday meals. Fish on a thick bed of ice with bellies down. Courtesy of Florida Sea Grant

This is a great time of year to purchase and enjoy seafood.  There is quality fish, shrimp, and shellfish currently at your local grocery store or seafood market. Usually with the holidays, there’s more time to explore new recipes in the kitchen. Fresh ingredients are the key to any good recipe and helps ensure healthy eating.  The National Oceanic and Atmospheric Administration (NOAA) FishWatch website (www.fishwatch.gov) provides consumers with information regarding seafood nutrition, safety, and sustainability.

FishWatch suggests the following when shopping for fresh fish:

Fresh Florida Oysters are almost as popular during the holidays as pecans and walnuts; they are just a little more difficult to crack! Oysters are a welcomed addition to any meal, as side dishes, appetizers, or snacks between larger meals. You’ll enjoy finding great ways to prepare this nutritious shellfish.

Consumption of raw seafood such as oysters is not recommended for those whose immune systems are compromised.  For example, patients completing chemotherapy or folks with blood or digestive disorders are at a higher risk for contracting bacterial infections.  Ask your doctor if you have a question whether you are at higher risk. Properly cooked oysters (plump, opaque, and curled edges) are healthy choices. Cooking kills bacteria associated with raw seafood. For more information on oyster consumption and recipes visit http://safeoysters.org

One recipe that complements the traditional bird is oyster dressing. With this recipe you can enjoy both turkey and seafood together. For more oyster and seafood recipes like this one, visit www.fl-seafood.com 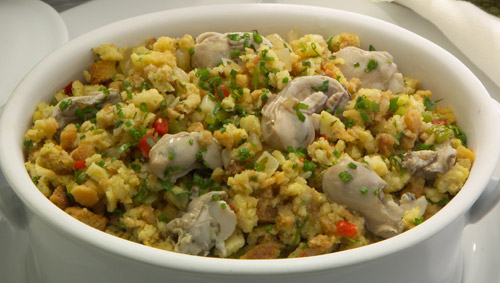 NW FL Reef Workshop – Save the Date! Please help us by Completing our Short Survey

Please save the date for the 2013 Northwest Florida Regional Artificial Reef Workshop sponsored by Florida Sea Grant and FWC, to be held at the Niceville Community Center in Niceville, FL on Wednesday-Thursday, February 6-7, 2013.

We invite your suggestions and feedback to help the steering committee identify and prioritize agenda topics through a brief online survey. Your honest response to the survey questions will guide our efforts to provide relevant experience to attendees. Please click here to Take the Survey! (estimated total time to complete: < 4 minutes)

Registration details are still being worked out and will follow soon with a draft agenda, incorporating the suggestions received through the on-line survey.

Please complete the survey no later than noon on Friday, October 26th, 2012.

Feel free to forward this information as appropriate. We hope to see many of you on February 6-7, 2013.