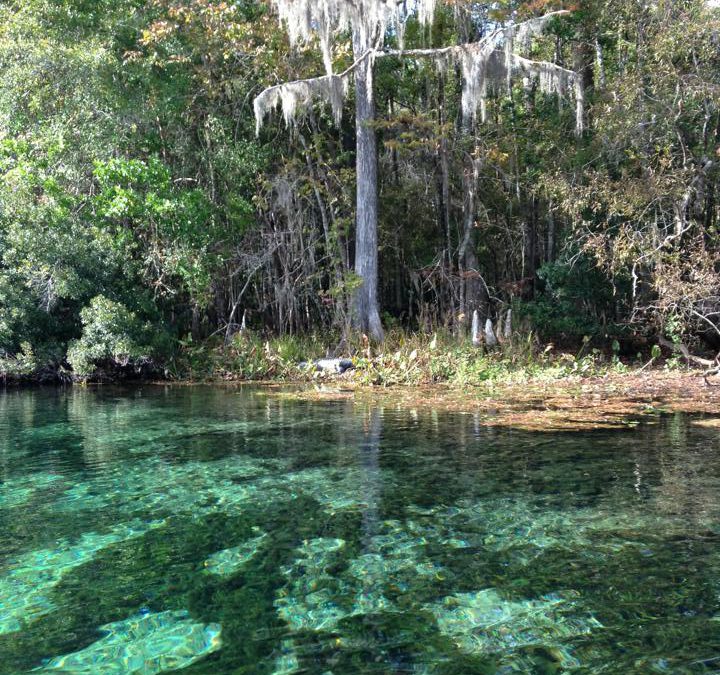 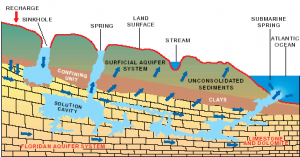 With more than 250 crystal clear springs in Northwest Florida it is just a short road trip to a pristine swimming hole! Springs and their associated flowing water bodies provide important habitat for wildlife and plants. Just as importantly, springs provide people with recreational activities and the opportunity to connect with the natural environment. While paddling your kayak, floating in your tube, or just wading in the cool water, think about the majesty of the springs. They are the visible part of the Florida Aquifer, the below ground source of most Florida’s drinking water.

A spring is a natural opening in the Earth where water emerges from the aquifer to the soil surface. The groundwater is under pressure and flows upward to an opening referred to as a spring vent. Once on the surface, the water contributes to the flow of rivers or other waterbodies. Springs range in size from small seeps to massive pools. Each can be measured by their daily gallon output which is classified as a magnitude. First magnitude springs discharge more than 64.6 million gallons of water each day. Florida has over 30 first magnitude springs. Four of them can be found in the Panhandle – Wakulla Springs and the Gainer Springs Group of 3.

Wakulla Springs is located within Edward Ball Wakulla Springs State Park. The spring vent is located beneath a limestone ledge nearly 180 feet below the land surface. Archaeological evidence suggests that humans have utilized the area for nearly 15,000 years. Native Americans referred to the area as “wakulla” meaning “river of the crying bird”. Wakulla was the home of the Limpkin, a rare wading bird with an odd call.

Over 1,000 years ago, Native Americans used another first magnitude spring, the Gainer Springs group that flow into the Econfina River. “Econfina”, or “natural bridge” in the local native language, got its name from a limestone arch that crossed the creek at the mouth of the spring. General Andrew Jackson and his Army reportedly used the natural bridge on their way west exploring North America. In 1821, one of Jackson’s surveyors, William Gainer, returned to the area and established a homestead. Hence, the naming of the waters as Gainer Springs.

Three major springs flow at 124.6 million gallons of water per day from Gainer Springs Group, some of which is bottled by Culligan Water today. Most of the springs along the Econfina maintain a temperature of 70-71°F year-round. If you are in search of something cooler, you may want to try Ponce de Leon Springs or Morrison Springs which flows between 6.46 and 64.6 million gallons a day. They both stay around 67.8°F.  Springs are very cool, clear water with such an importance to all living thing; needing appreciation and protection. 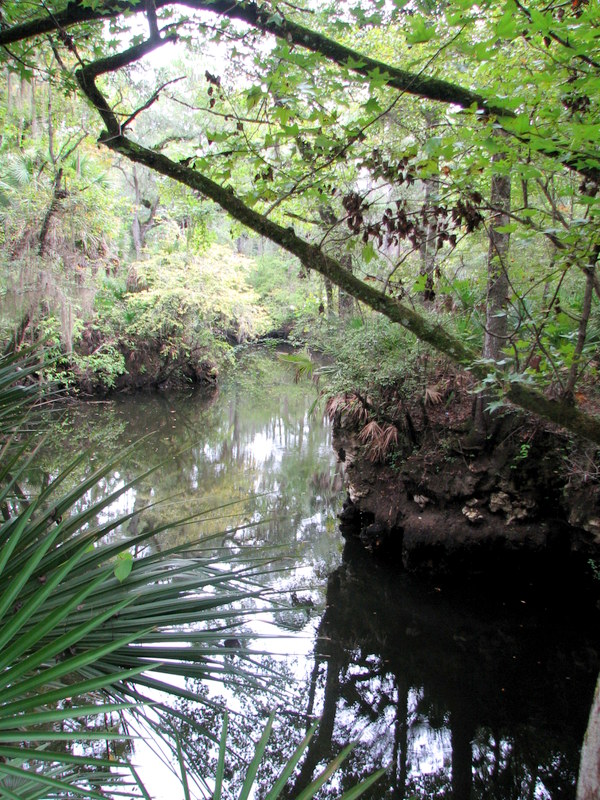 Hernando de Soto and his party crossed the Aucilla River sometime in October of 1539 and celebrated Christmas in what is now Tallahassee. Many things in Florida have changed since de Soto passed this way, but when the 2015 Panhandle Outdoors LIVE! tour hiked the Aucilla Sinks portion of the Florida Trail this September, many things had not. 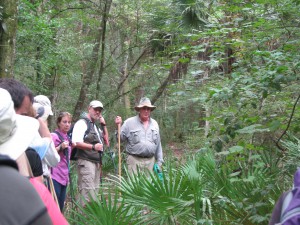 Yes, the trail is maintained and marked by the Apalachee chapter of the Florida Trail Associations and there are bridges in spots, but the blood sucking bugs that bedeviled deSoto haven’t dissipated. More importantly, the spectacular and distinctive area provides a relatively easy hike that reveals the connections between geology and hydrology in an area with little disturbance by the settlers who followed the first Europeans into North Florida.

Hikers got up close and personal views of the Karst topography found in North Florida. This topography occurs as the tannic rivers and runoff dissolve the underlying limestone on their way to the aquifer. These connections and voids in the bedrock allow the Aucilla River to “come and go” above and below ground as it moves to the Gulf of Mexico as do all rivers in the Suwannee River Water Management District other than the Suwannee.

Native Jefferson county guide, David Ward pointed out the contrast between tannic water in the river channel and the clear water in caves near the river. “In those caves the water is crystal clear. You are looking at the water of the aquifer itself.”

Leon County agent Will Sheftall seized the opportunity to drive home how vulnerable Floridians are to ground water pollution and its effects on our water supply. “Here there’s little distance between the surface and the ground water. In these sandy soils, water moves quickly from the surface to the aquifer. Whatever is in that water can easily get into our ground water. Our personal activities and our public policies need to reflect that to ensure the future of Florida’s water quality.”

As we reached a slightly elevated area, Ward pointed out a longleaf pine/wiregrass community restored by reinstituting controlled burning. The open vegetation contrasts with the non-fire resistant species such as parsley hawthorn in wetter areas usually untouched by fire. “These pine savannahs were widespread when the Europeans arrived,” Ward noted. “Over my lifetime in these woods, I’ve seen appropriate management bring back these conditions closer to what we know it was like when the Europeans arrived.” 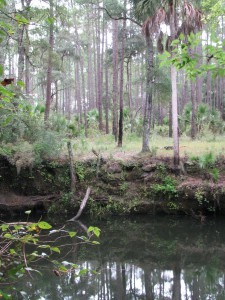 One of the many locations where the Aucilla River “rises from the limestone caverns beneath the earth.
Photo: Jed Dillard

Information on this section of the Florida Trail is available from the Apalachee Chapter of the Florida Trail Association, the Suwannee River Water Management District and Florida Fish and Wildlife Conservation Commission. Humidity never went below 80 percent during our late morning, early afternoon trip. November will likely provide less buggy and surely less muggy conditions. If you’d like to learn about this area from the comfort of your recliner or need some extra encouragement to strike out on the walk, check out this program previously broadcast by WFSU TV. http://wfsu.org/dimensions/viewvideo.php?num=184 Either way, you’ll know more about Florida’s spectacular natural world.

A portion of the Aucilla River flows through a landscape of dramatic and unusual geologic formations. Join us for this tour to see an amazing sequence of sinks and river rises, created as the river alternately disappears into the underlying karst and resurfaces. Fringed with moss-draped trees and native palms, the sinks are pools of black water easily viewed by walking the surrounding embankments along a 4.5 mile-segment of the Florida National Scenic Trail.

Your guides will cover the human history of this wildlife-rich Aucilla River landscape, which extends back 12,000 years to the Pleistocene epoc when mastodons, saber-tooth tigers and other large mammals roamed a landscape that resembled the African savannahs of today. The 1983 unearthing of a 12,000-year old mastodon tusk exhibiting cut marks— evidence of slaughter by humans — provides some of the earliest known evidence of man on this continent.

Where: meet at JR’s Aucilla River Store, 23485 US 98, Lamont, FL 32336 (east of the Aucilla River bridge, the boundary between Jefferson and Taylor counties)

Please feel free to share this announcement and attached flyer with those you know who may be interested. And we hope you can join us for this trip if you’ve never seen this beautiful, mysterious place.

Will Sheftall, for Extension Natural Resource Agents in the Panhandle 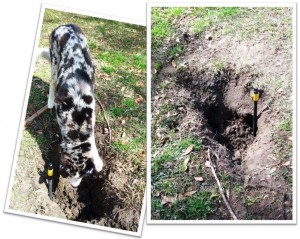 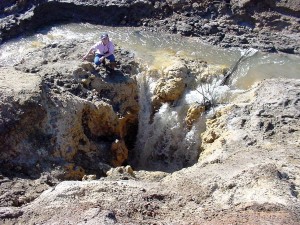