Asian Cockroach – Is it a Pest of the Home or the Garden? 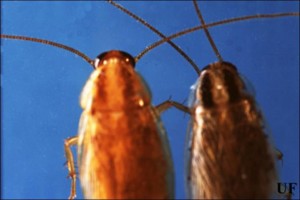 In appearance, both German and Asian cockroach adults are about 5/8 inch long and are brown in color with two darker parallel bands running lengthwise behind their head. But unlike German cockroaches, Asian cockroaches are strong fliers with sustained flights of at least 120 feet. As a person is watering a mulched plant bed with a hose, the water disturbs the roaches and they quickly fly out of the mulch, resembling little moths. Or home gardeners may see them flying out of the lawn during mowing.

They become active at sundown and are attracted to lights. They often fly inside through any opening in a house such as lighted doorways or windows. Once inside, they fly to and crawl on illuminated television or computer screens and walk on walls while lights are on during the evening. This is when people believe they are seeing a German cockroach invasion in their house, but German cockroaches do not fly.

Many people become upset when they see Asian roaches inside their home. The good news is, however, that indoor infestations are rare occurrences.

Asian cockroaches are susceptible to insecticides but they are difficult to control because of their abundant population and their ability to fly considerable distances.

Because they can fly 120 feet or more in a single flight, large areas around a home require treatment. And cockroaches in surrounding untreated areas may result in re-infestation.

Residual sprays around the perimeter of structures are usually unsuccessful because of numerous infested areas in adjacent lawns, mulch and wooded areas. Adults enter homes through windows and doorways and immediately fly to walls, avoiding baseboards and other typical areas normally treated for German cockroaches.

For additional information on Asian cockroaches and their control, contact your local University of Florida / IFAS Extension Office or Pest Control Operator.