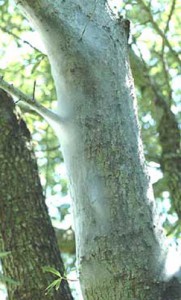 Many people are noticing small insects on trunks and branches of their trees. When disturbed, these insects move in a group and are commonly called tree cattle because of this herding habit. They are ¼ inch brownish-black insects with white markings.

Some people assume that these insects will injure their trees but they are harmless. They could be considered beneficial.

These insects are called psocids (pronounced so-cids). They have numerous common names including tree cattle and bark lice. They feed on lichen, moss, algae, fungi, spores, pollen and the remains of other insects found on the tree’s bark. As a result, they are sometimes referred to as bark cleaners.

Tree cattle may form webbing. This webbing is tight against the tree’s trunk and/or limbs. It appears suddenly. The webbing is used as a protection from weather and predators. Underneath you may find psocids.

The glistening webbing may attract a person’s attention resulting in the tree being visually inspected from top to bottom. A dead branch or other imperfections in the tree may be noticed and then wrongly blamed on the tree cattle. I’ve talked to homeowners that sprayed their trees with insecticides or that hired pest control businesses to treat the trees as a result of finding the webbing/psocids. One person told me that he cut down a tree after finding tree cattle. He wrongly assumed that these insects were pests that might move through the area and kill trees. He thought he was doing a good thing.

Adult female psocids lay eggs in clusters on leaves, branches and tree trunks. After hatching, the immature insects (nymphs) remain together under their silk webbing. Adults have wings which are held roof-like over their body. Nymphs are wingless. Psocids usually have several generations per year in Florida.

After seeing the webbing and/or insects, many people insist on spraying insecticides because they believe these insec 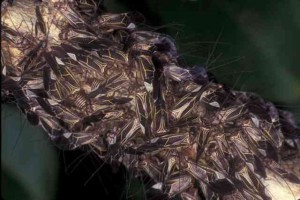 ts are damaging their trees. But as mentioned, they are bark cleaners and do not damage trees. If the silk webbing is considered unsightly, a heavy stream of water from a garden hose can be used to wash insects and webbing off infested trees. If nothing is done, the webbing usually goes away in several weeks.

Psocids can be found on many rough-barked hardwood trees and palms. Occasionally, they may be found on wood siding, fence posts or similar areas.