Nectaries That Are Out of This Flower!

The diversity of life is impressive. As gardeners, we focus on plant life, which has so much diversity that you could probably study plants all your life and still feel like there is so much more to know and discover.

Botanists attempt to classify all living plants (and extinct ones, too!) according to binomial nomenclature and have created a long list of terms to describe the myriad plant structures, shapes, textures, etc. present in the plant world. One of the many interesting structures that you may notice upon close inspection are extra-floral nectaries. 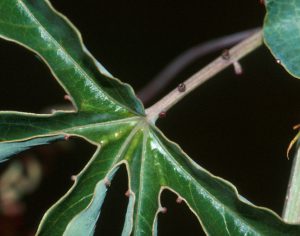 The small bumos on this passionflower leaf are extra floral nectaries. Source: UF/IFAS.

Extra-floral nectaries are nectar-producing structures that are found outside of the flower (extra-floral means out of flower like extra-terrestrial means out of earth). Most of us are familiar with nectar being produced in the flowers as part of pollination. The plant’s sweet, nutritious nectar entices pollinators to visit, sip some nectar, bump against the anthers and get pollen stuck on themselves, visit the next flower for more nectar, and transfer that pollen to another plant’s stigma. So, what would be the benefit of producing nectar in areas outside the flower? Turns out, that while the diversity of life is impressive, the relationships formed between various species are fascinating and the presence of extra-floral nectaries in certain plant species highlight such inter-relationships.

Scientists have long been interested in these structures and have found that many of the plants that form extra-floral nectaries do so to entice insects for protection from other insects. Ants are usually associated with plants that produce extra-floral nectaries and have been shown to protect the plant from herbivores that may want to munch on the plant. Some ants have been recorded spraying formic acid (the compound that causes the burn of a fire ant sting) on potential plant pests. The ants benefit by having a regular source of carbohydrate-rich nectar. Carnivorous plants, including our locally famous pitcher plants (Sarracenia spp.), use extra-floral nectaries to entice insect prey and to create a slick surface that causes its prey to fall in the pitcher. The plant-ant relationship is an example a mutualistic symbiosis (both organisms benefit) whereas the pitcher plant-insect relationship is an example of predation. 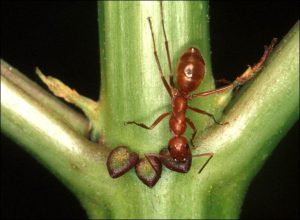 An ant visiting the extra floral nectaries on an elderberry shrub. Source: UF/IFAS.

Many familiar plants produce extra-floral nectaries, including cotton, hibiscus, passionflower, and peach. These nectar producing glands usually look like small bumps and are found along the petiole (leaf stalk), the base of leaves, at the stipules (small leaf-like structures where petiole meets stem), and sometimes near the bracts found just outside of the flower. 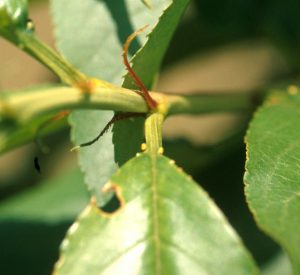 Peach trees are a common tree that contain extra floral nectaries at the base of the leaf. Source: UF/IFAS.

Next time you notice a strange bump on a leaf, a line of ants along the stem, or an insect regularly visiting leaves instead of flowers, take a closer look and you may be observing one of the many amazing examples of diversity and inter-relationships of species. To learn more about extra-floral nectaries, please see the EDIS publication Many Plants Have Extrafloral Nectaries Helpful to Beneficials. For a thorough glossary of botanical terms, visit the Missouri Botanic Garden glossary page. 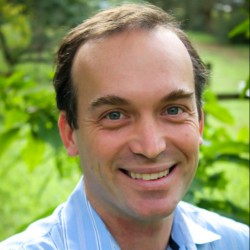