While there are many fungi that produce mushrooms out in the world around us, there are some that are particularly notable. Edible varieties such as the lion’s mane, jelly ear, and chanterelle may be welcome additions to the landscape. We may have to look out for harmful fungi that cause leaf spots on our landscape plants, toxic mushrooms that could cause harm if ingested, or even things like sooty mold that indicate the presence of another problem (plant-damaging insects, in that case). Then, there are stinkhorn mushrooms. 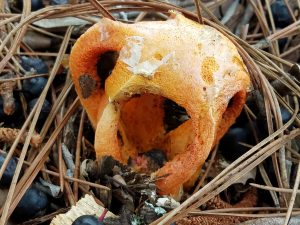 While not poisonous (indeed, some varieties are edible) and not harmful to plants, these mushrooms are usually unwanted by homeowners. Why? There are two things that make them undesirable. First, they emit an odor that may resemble rotting meat, raw sewage, or some delightful combination of the two. Secondly, some species strongly resemble…well, the genus name Phallus may give some indication. Suffice to say that if your landscape mulch appears to have an inappropriate anatomical addition after a cool rain, you may have a stinkhorn mushroom.

These fungi are decomposers of dead plant material, breaking down wood chips, fallen leaves, or old tree stumps. This is an incredibly important role in the ecosystem, but stinkhorns are particularly offensive as they go about doing their job. The reason for their smell, specifically, is because they need to spread their spores. To do so, they attract insects. Unlike many plants which use beautiful flowers with pleasant fragrances to attract pollinators, stinkhorns attract a different crowd of helpers. They exude a slimy mass of spores that are appealing to flies and other invertebrates that enjoy feces, dead animals, and the like. The insects transport spores from place to place as they feed on the slime. 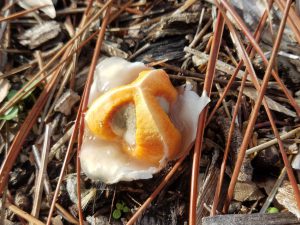 If you smell or see these mushrooms in your yard or landscape, don’t worry. They won’t last long and may be beneficial to the environment. If they become intolerable, stirring mulch up can help discourage their growth, or they can be removed physically (perhaps with a tool or while wearing gloves, at least). If they recur in an area time after time, look out for their early stages of growth, which may resemble puffballs or small eggs, and remove them then. Fungicides tend not to be effective and may harm other beneficial fungi in the environment.

For more information, see our EDIS publication on stinkhorn mushrooms at https://edis.ifas.ufl.edu/publication/PP345.