Why Are Some Spring Flowering Fruit Trees Blooming in Fall? 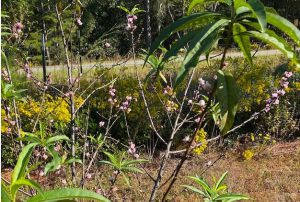 Some fruit trees that normally bloom in late winter and spring are blooming now. Recently, a lady who had been out of town noticed that her peach trees were blooming when she arrived home. Knowing that peach trees ordinarily bloom around spring, she called me about this unusual occurrence. This unseasonal flowering also is occurring on some other fruit trees such as crabapple, apple and pear. This phenomenon also can occur in other deciduous spring flowering trees such as Japanese magnolia.

During most years, normal leaf drop in these trees occurs later in the season as the day length becomes shorter and when temperatures are cooler. Cooler temperatures prevent the flower buds from swelling and opening. However, if the leaves fall when the day length is longer and the temperature is warmer, the flower buds will swell and open. The leaves prevent the flower buds from developing. If the leaves fall early, during late summer or early fall, the flowers are allowed to open. With commercial apple production in some parts of the world, chemicals are applied to intentionally remove the leaves to force a second crop after harvesting the first crop of apples. This practice would not work in our area because there is not enough time to mature a second crop of fruit before cold weather arrives.

It is possible for a second crop of small fruit to develop on fruit trees that are blooming now as a result of the second flowering this year. However, because of the colder weather that will be arriving as we move into winter, any such fruit will not have time to mature. When the first killing frost or freeze occurs, these young fruits will be killed.

The lady who called about her peach trees wanted to know if she should remove the flowers and if this late flowering would negatively impact next spring’s flowering and fruit production. The flowers that opened this fall will be absent in spring – reducing the total number of flowers. However, during most springs, fruit trees produce more blooms and subsequently fruits than the trees can support. As a result, this unseasonable blooming should result in a needed thinning in next spring’s fruit crop.

So, there’s no need to remove them…just enjoy this “surprise” flower show.