Despite efforts by public and private land managers, feral hog populations continue to rise in many areas in Florida.  Feral hogs damage crop fields, lawns, wetlands, and forests.  They can negatively impact native species of plants and animals.  Their rooting leads to erosion and decreased water quality. 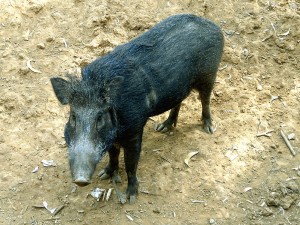 There are several options for controlling feral hogs.  Choosing the right option depends on the situation.

Let’s talk about these options.

Hunting with dogs is really not very effective for removing enough hogs to control populations.  Dog hunting can move sounders of hogs from areas where damage is occurring for a period of time.  This can be helpful when crops need to be protected from hog damage until they can be harvested.

Shooting hogs also is not effective for removing large numbers of hogs.  Situations where it is successful include protecting crop fields and for taking hogs that will not go into a trap.  Shooting success depends the education level of the hogs and the sophistication of the shooting equipment available.  Hogs learn quickly to avoid danger.  They learn by watching other hogs who get shot or trapped.  Hunting pressure can disrupt hog patterns and make them harder to trap or hunt.

Box traps can be effective at trapping young hogs that are not trap smart.  A study conducted by a graduate student, Brian Williams, at Auburn University looked at the efficacy of different trap styles.  Young hogs entered box traps and corral traps at similar rates.  The study also found that adult females were 120% more likely to enter corral traps than box traps and adult males were more reluctant to enter either trap style but were more likely to enter the corral traps. (Williams et al, 2011)

Corral traps are best for capturing whole sounders.  Box traps can be effective for capturing young hogs.  When trap smart adult females or males are in an area, shooting or hunting with dogs are options.  Just remember that hunting pressure often just moves the hog problem onto another property.  In order to eliminate hogs from a given area, we must employ several of these strategies.  For example, we may be able to trap a sounder in a given area but still have a group of boars that will not go into a trap.  In this case, we may set up to shoot them after trapping the rest of the hogs in a corral trap.  By using these two techniques, we can drastically reduce the number of hogs in an area.

For more information about feral hogs, go to http://articles.extension.org/feral_hogs.