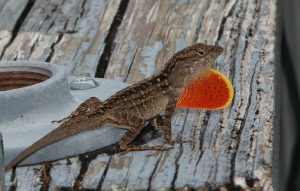 The brown anole, a lizard native to Cuba and the Bahamas, first appeared in the Florida Keys in 1887. Since then it has moved northward becoming established in nearly every county in Florida. By hitching a ride on boats and cars, as well as, hanging out in landscape plants being shipped throughout the state, the Cuban anole (Anole sagrei) has become one of the most abundant reptiles in Florida. However, the native Carolina green anole (Anole carolinensis) has been impacted.

While both anole species are capable of thriving on the ground or in the trees, the invasive brown anole has altered the behavior of the native green anole by forcing them to remain arboreal. Anoles eat a wide variety of insects, spiders and other invertebrates. Cuban brown anoles feed on juvenile green anoles and their eggs, reducing their population even more. Brown anoles are brown to grayish in color. While they can adjust to various shades of light or dark, brown anoles cannot turn green. The native Carolina anole can camouflage itself by altering its skin color from light green to dark brown, including many hues in-between, but have no distinctive markings on their backs. Male brown anoles often have bands of yellowish spots, whereas females and juveniles have a light vertebral stripe with dark, scalloped edges. An additional identification feature is the dewlap of the male Cuban anole. Male anoles extend the skin of their lower jaw (the dewlap), displaying a bright orange to red color, in order to attract females or warn other males.  Cuban brown anoles have a white line down the middle of the dewlap. 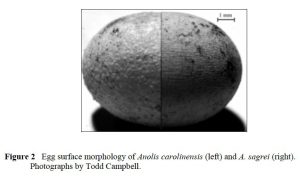 If the Cuban brown anole and Carolina green anole are placed side by side, the one with the shorter snout is the brown anole. Throughout the warm months, female anoles lay single, round eggs in moist soil or rotten wood at roughly 14 day intervals. The eggs of brown anoles have longitudinal grooves, whereas green anoles have raised bumps. Once identified, control measures can be taken. Brown anole eggs can be destroyed by freezing or boiling. Adult brown anoles can be located and captured by performing night time hunts with lights. Being diurnal, cold blooded creatures, Cuban anoles tend to congregate together under shrubs and along structures. Once collected the invasive Cuban brown anoles can be humanly euthanized by rubbing lidocaine on their skin and placing them in the freezer.