Are Sharks Really Out to Eat People?

You might get that impression from the movies but if you look at the data you will see quite a different story. With nearly fifty species identified in the Gulf of Mexico, an encounter with a shark is eminent if you spend much time in our coastal waters. So, let’s get the “scary” stuff out of the way first and finish with the more interesting facts for our much-maligned “toothy” friends. 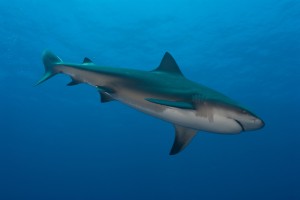 The most recent data from the University of Florida’s International Shark Attack File shows that unprovoked attacks have occurred in 26 of Florida’s 35 coastal counties, from 1882 to present. Florida is the hotspot in the U.S. which makes sense with our 1,300-plus miles of coastline. Volusia County has recorded the most incidents at 299. Brevard County is second (144) and Palm Beach County third (75). Do you have any idea how many people have been in the water in these three counties since 1882? Let’s just say, a lot; if sharks were hunting for people, they would have found more of us by now.

In the coastal counties of the Florida Panhandle, numbers are much lower with Bay County having the most incidents at 9. Numbers drop from there with Escambia at 6, Okaloosa at 4, Gulf and Franklin at 2, Santa Rosa and Walton at 1 and none from Wakulla down through Pasco; remember, since 1882. Species most often involved have been bull or blacktip sharks (20% each), spinner at 16% and hammerhead at 13%. Believe it or not, the next highest is nurse sharks at 7%. Compared to drowning fatalities from 1992-2000, sharks loose, 2 to 135.

Okay, now for some more interesting facts about our Gulf of Mexico sharks. Some of you have heard about the encounter that Grayson Shepard (of Apalachicola) had with a great white back in 2015. If you want to see his amazing video visit this link. Even though great whites are considered a cold-water species, scientists have known for a long time that they do visit the Gulf of Mexico. Their incredible migratory nature has been studied in greater detail of-late. An 8.5 foot juvenile female that was radio-tagged off Hilton Head South Carolina travelled to Nova Scotia Canada before turning around and going south all the way around the tip of Florida and into the Gulf of Mexico. The most northerly “ping” picked up by the satellite receiver was north of Tampa on January 31, 2018. Savannah (her given name) is currently back on the east coast near where she was tagged by researchers. Vist this website to follow Savannah’s incredible journey. 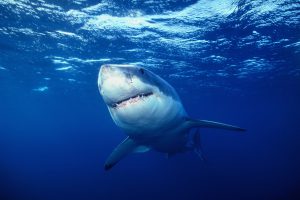 Another impressive shark species that occurs in our Gulf waters holds the title of “world’s largest fish!” Whale sharks can reach lengths of fifty feet and weigh around 20 metric tons. Most of the sightings in the Gulf have proven to be juveniles but occasional aggregations happen around abundant plankton resources. One chance encounter by scientists from the Mississippi-based Gulf Coast Research Laboratory, documented a large number of whale sharks feeding near the surface. Plankton samples revealed a rich concentration of fish eggs from recent spawning activity of little tunny and crevalle jack. Aggregations numbering near 150 individuals, feeding on abundant plankton, have been reported in the nutrient-rich waters near the Mississippi River drainage.

Sharks in the Northern Gulf of Mexico, just as alligators in our lakes and rivers, deserve our respect and a balanced conservation-minded attitude. They are an incredible resource that have vital connections to many other species in our marine environment. They are also one of the most thrilling creatures on the planet when you get to meet one up close. Just please use some good sense and mind those pearly-white teeth if you catch one on a line. Even a cute little wild mouse will bite you when handled but the outcome is slightly more concerning with sharks and alligators.