“Doing Something” in Dog Days 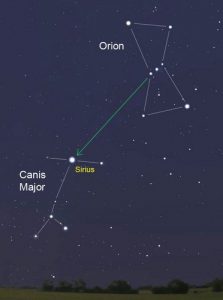 The “Dog Days” are the hottest, muggiest days of summer.  In the northern hemisphere, they usually fall between early July and early September. The actual dates vary greatly from region to region, depending on latitude and climate. In Northwest Florida, the first weeks of August are usually the worst.  So, get out before it gets hotter.

In ancient times, when the night sky was not obscured by artificial lights, the Romans used the stars to keep track of the seasons. The brightest constellation, Canis Major (Large Dog), includes the “dog star”, Sirius. In the summer, Sirius used to rise and set with the sun, leading the ancient Romans to believe that it added heat to the sun. Although the period between July 3 and August 11 is typically the warmest period of the summer, the heat is not due to the added radiation from a far-away star, regardless of its brightness. The heat of summer is a direct result of the earth’s tilt.

Life is so uncertain right now, so, most people are spending less time doing group recreation outside.  But, many people are looking to get outside  Spending time outdoors this time of year is uncomfortable, potentially dangerous, due to the intense heat. So, limit the time you spend in nature and always take water with you. But, if you are looking for some outdoor options that will still allow you to social distance,

try local trails and parks. Some of them even allow your dog.  Here are a few websites to review the options: https://floridahikes.com/northwest-florida  and https://www.waltonoutdoors.com/all-the-parks-in-walton-county-florida/northwest-florida-area-parks/  Be sure to check if they are allowing visits, especially those that are connected to enclosed spaces.

Other options may include zoos and aquariums: www.tripadvisor.com/Attractions-g1438845-Activities-c48-Florida_Panhandle_Florida.html

Or maybe just wander around some local plant nurseries: