Fly Trapping Plant That Does NOT Eat its Catch

Most people have heard about bug-trapping plants that sustain themselves by digesting and absorbing nutrients from bugs that they catch. This gives them the ability to grow in soils of low fertility that most other plants cannot tolerate. Good examples of this in our Florida Panhandle area include several species of pitcher plants, Venus flytraps (non-native), bladderworts, sundews and butterworts. Some trap their unsuspecting prey by “trickery” with the temptation of sweet but sticky droplets. Others draw prey by the allure of various scents and as the bugs crawl down a narrow passage for the “treat”, one-way hairs prevent them from crawling back out; the “trick.”

One-way hairs is the strategy employed by the Dutchman’s Pipe (Aristolochia littoralis), surely one of the oddest looking flowers on the planet. Also called the “calico flower,” this non-native species of Aristolochia, superficially resembles the Dutchman’s pipe that the famed Sherlock Holmes smoked. 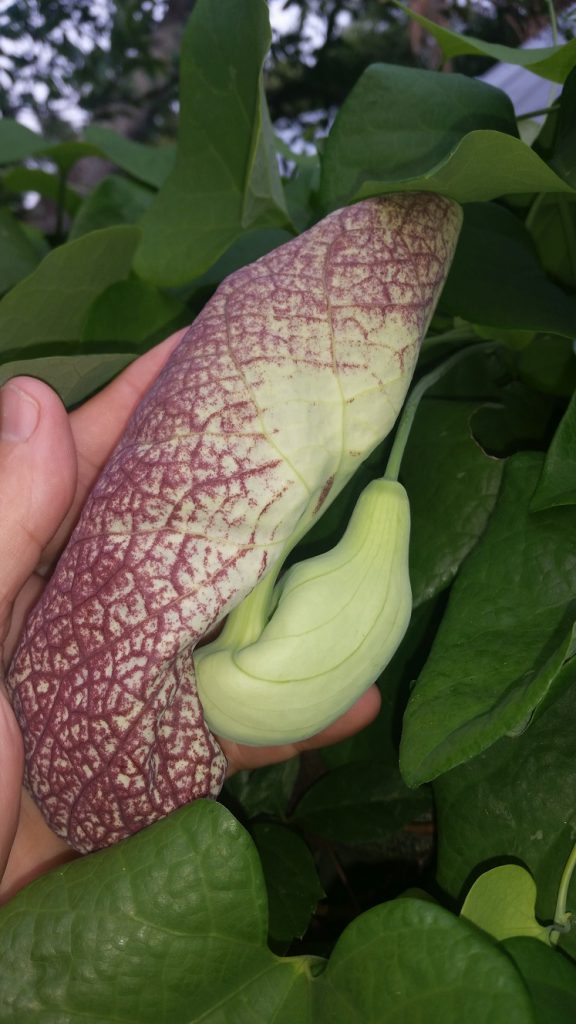 A side-view of the still-closed petals and bulbous reproductive chamber.

The plant is listed as a category II invasive on the Florida Exotic Pest Plant Council’s 2017 List of Invasive Plant Species. Florida also has three native species of Aristolochia, some of which are important larval foods for the pipevine swallowtail. However, there are several non-natives that are actually toxic to butterfly larvae. All of the plants contain a chemical compound called Aristolochic acid, which is considered a strong carcinogen and has been linked to cancer in people who have used this plant as an herbal remedy. The plant has also been found to be a potent kidney toxin and many people have required renal transplants or dialysis as a result of using herbal remedies containing aristolochic acids.

Aristolochia is not alone in the world of bug attracting plants or fungi when it uses a fragrance resembling rotting meat as bait. The unique feature of this plant comes in the trapping strategy that is employed. When a fly is lured down the one-way, hairy tube into the bulbous chamber that serves to hold it’s captor, the flowers reproductive structures are encountered. During the fly’s exploration of the chamber, with no way out, pollen granules adhere to the fly’s body. Amazingly, within a day or so, the stiff hairs blocking the tubular entrance to the prison gradually relax or breakdown, allowing the fly to escape. Scientists who study these flowers all concur that a fly must have a very short memory because it isn’t long before the recent captor ventures into another Aristolochia trap to complete the flower’s pollination process. 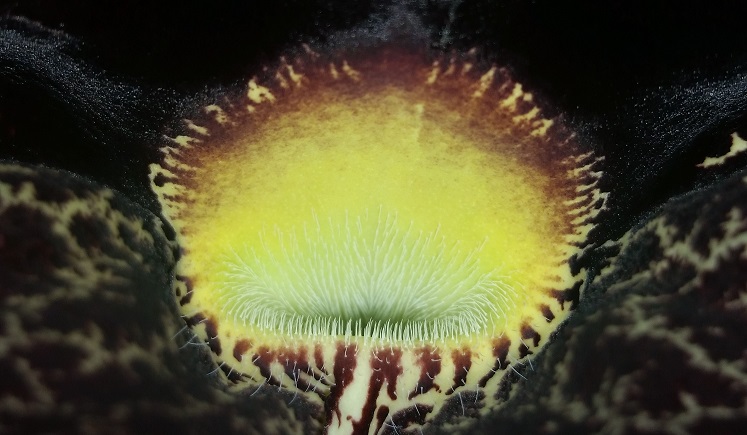 Tiny hairs lining the tube leading to the chamber prevent escape, for a time.

The flower itself is an amazing structure of graceful lines, purplish-brown calico patterns and a bulbous reproductive chamber. However, the story behind the marvelous reproductive strategy of the plant is the hidden gem. Be aware though, that this is not a plant that would be recommended for our Panhandle flower gardens due to its habit of invading wildlands. Oh, now that you’ve struggled through this entire article trying to pronounce Aristolochia in your head, here is how you say it: uh-wrist-oh-low-kee-uh. Good luck with that.