When is a Muscadine a Scuppernong?

When we moved to the Florida Panhandle in 1989 and bought a house in Wakulla County, my wife and I inherited a grape arbor that was planted by the original builder of the home many years previous. It consisted of three 4×4 posts with cross pieces at the top and a run of heavy gauge wire out near the ends of each cross piece. Maintenance had been lacking for some years so the vines had grown into a massive tangle which at first glance, I surmised I would end up cutting down to help improve the appearance of the property. Well, as is often the case, timing is everything and the existence to this day of that grape arbor, is due to the fact that it was late summer and the vines had some fruit on them. It only took one taste of a sweet, flavorful black muscadine grape to decide they were worth keeping. Little did I know what I was in for though, when it came to properly managing this “wildling” for a productive, beautiful arbor; one that now provides many culinary options, as well as a pleasing, eye-catching aspect in our home landscape.

After looking closer at the vines, it appeared that there were two different species of grapes growing. The very dark purple (almost black) muscadines, were dwarfed by much larger greenish-bronze grapes at one end of the arbor. I now know that these grapes are typically referred to as scuppernongs by most locals and they are actually the same species as the dark grapes. In fact, Vitus rotundifolia is the scientific name for our native wild grapes that have a range from Florida to New Jersey in the east, and west to Texas and Oklahoma. The fruits of this species can be bronze, black or red, depending on the cultivar and they are the same species I remembered picking from wild vines as a youth, which ranged in size from ¼ to ½ inch and were often quite tart. Currently, there are about 150 cultivars of muscadine grapes grown for their fruit and their innate resistance to pests and diseases.

The reason for the two varieties on our grape arbor had to do with the fact that many muscadines produce only pistillate flowers and require pollen from another variety to produce fruit. A few varieties have perfect flowers and can produce fruit on their own, notably Carlos and Noble. Writings about these native grapes date back to the early 1500’s as early explorers of the Cape Fear River Valley in modern-day North Carolina described its abundance and pleasing qualities. The common name “scuppernong” is derived from the Scuppernong River in North Carolina but the name has many variations depending on the locale (scuplin, scufalum, scupanon, scupadine, scuppernine, scupnun, and scufadine). The word “scuppernong” comes from the Algonquian “askuponong,” meaning “place of the askupo,” which is the sweet bay tree (Magnolia virginiana). Cultivation has been recorded as early as the 17th century and with over 100 years of breeding, several bronze cultivars such as Carlos, Doreen, Magnolia and Triumph, are distinguished by having perfect flowers. There is one particular vine on Roanoke Island North Carolina that is considered by many to be the “Mother Vine” for all modern day varieties. This vine has been cultivated for around 400 years, to-date. 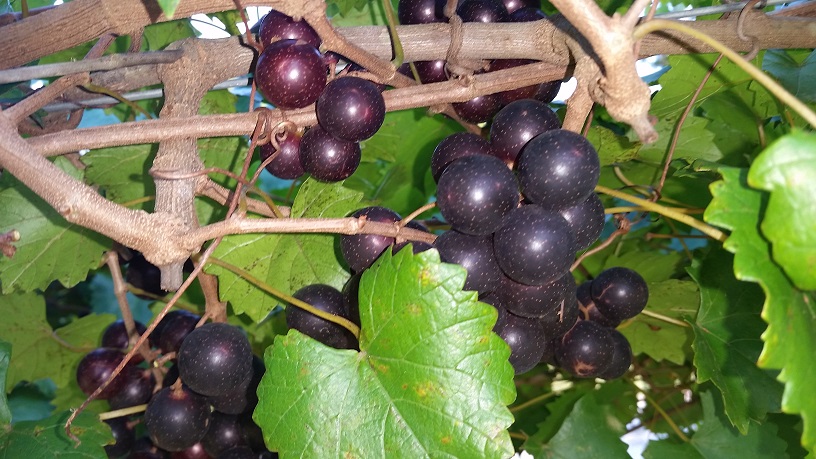 If by this time, you are working up a craving for a taste of muscadines, you are not alone because late-summer is the peak production period for many vines around the region. If you do not have your own vines, you are still able to get these grapes at several places around our area. Visit this link for a list of wineries and vineyards in Florida, some of which run u-pick operations. Or you may even have a nearby neighbor with an abundance of fruit and generosity. Some cultivated varieties are suitable for table fare as they have fewer seeds and thinner skins. The tougher-skinned varieties are suitable for jellies, jams, grape butter, and wine making. Bronze scuppernongs produce a very light-colored wine with a mild fruity flavor, while the dark purple muscadines derive a dark reddish, and stronger flavored wine. No matter the type of muscadine, they all provide important habitat and food for many wild critters as well. Thankfully, they generally produce enough bounty to go around and I never begrudge the opossums, raccoons, squirrels and birds their share of the blessing.