Life Stages of the Eastern Newt

Many of our local creatures lead fascinating lives that are rarely observed by the casual nature-seeker. However, thanks to those seriously committed naturalists, who may seriously need to be committed, we get the opportunity to peek into the secret lives of newts for some wild revelations. By the way, I do consider myself a naturalist and on occasion will come close to the edge of “crazy” in my nature adventures. Nevertheless, I do not believe I would actually qualify as “committable” because I have never totally lost that innate capacity to be freakishly startled when a treefrog jumps on the back of my neck in the dark. If you ever get past the point of being startled by things like that when on a nighttime herp hunting venture, you should probably speak with a professional.

Several months ago, I once again decided to test my measure of “committability” on a late night visit to the sinkhole pond behind my house. I was hoping to see what kinds of local amphibians might be active because I could hear several different frog species sounding off. As I waded in with my headlamp for a light source, I soon discovered that frogs are pretty darn good at not getting caught at night (imagine that). I had a dip net but never got close enough without scaring the quarry under. However, when I made a few scoops across the bottom in the shallows I was excited to see something wriggling among the leafy debris in the net. 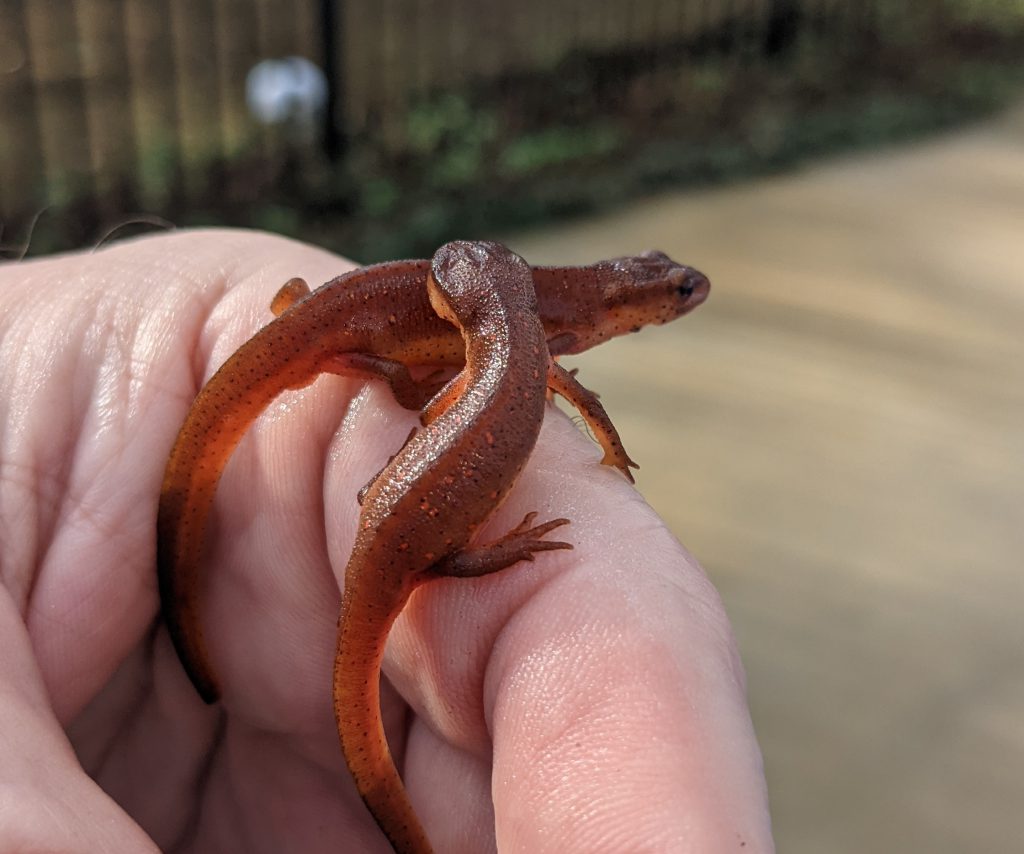 Upon returning to the house, it didn’t take long to identify the three-inch long specimen as an eastern newt. As I later read more in depth about this species, I learned that newts are in the family called Salamandridae and typically (not always) have three distinct life phases where they go back and forth between the land and water. After the eggs hatch, larval newts are fully aquatic, with a pair of feathery external gills protruding behind their head. As they mature, they metamorphose into a bright orange/red color and no longer have external gills. They then leave the water for a terrestrial phase where they are called “efts.” Efts may wander the forest floor for many years and travel long distances before once again returning to the water as an adult to breed. Back in the aquatic environment, they morph into a different looking creature yet again. The external gills do not return but the skin color goes from brightly colored to a greenish-yellow and the tail develops a flattened ridge that aids in swimming. All phases have tiny, bright red dots on the body that are circled by black rings, hence their other name, the red-spotted newt. The skin of the eastern newt is also toxic and scientists refer to the bright coloration of the eft as “aposematic” or warning coloration. Their toxicity allows this species to co-exist with fish, unlike some other salamanders that would become tasty snacks and not likely survive to adulthood. The eastern newt is widespread throughout eastern North America and has been intensely studied for its amazing ability to regenerate lost body parts. Not just limbs but even organ tissues!

So the next time you want to test whether or not you might qualify as a hardcore naturalist (i.e. certifiably nuts), take a nighttime trek into a dark, watery, scary place alone. Pay close attention to your reaction when something moves under your foot on the squishy bottom. I would wager that most of you would fall somewhere just shy of being a true hardcore naturalist. I would even put money on it. Have fun!