Well, the answer to this question should be obvious, right? However, when we take a closer look at these interesting creatures, the first impression created by their frightful name will likely evaporate completely. First, scorpions are considered venomous, rather than poisonous (I know, a technicality). They have many predators that eat them with no ill effect so they are not poisonous. Anything that has the ability to deliver a toxin by means of injection is classified as venomous. Next, the name is a true misnomer because the group of animals referred to as blue-tailed scorpions are actually a type of lizard called a skink. 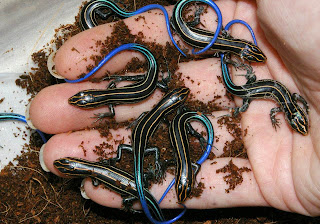 Scincidae is just one of sixteen families of lizards worldwide but it contains some of the most beautiful species of reptiles. Florida is blessed (yes, blessed) with at least seven species of skinks, with one being divided into five sub-species. Three of the five sub-species of the mole skink have “protected” status under state or federal laws.

Several of our native skinks in the Panhandle are challenging to identify at first glance, particularly during their younger years. The five-lined, southeastern five-lined and broadhead skink are all striped and have blue tails as youngsters, hence the origin of the frightening title for this article. According to folklore, these animals have the ability to deliver a painful sting with their tail. Well, as a lifelong reptile enthusiast, I have had the experience of catching many young, blue-tailed skinks without any stings.

Now, back to the question of whether or not these blue-tailed skinks are poisonous. From everything that I have read, there is no scientific evidence that skinks are inherently toxic when eaten by other animals. It is theorized that they could potentially harbor Salmonella bacteria but I have never heard of a documented case of this either. Many people hold the belief that when a skink in eaten by a dog or cat, it causes the animal to hold its head cocked and wander off to one side when walking. Veterinarians refer to these symptoms as vestibular syndrome and often cannot diagnose a cause. Vestibular syndrome is related to the inner ear or the parts of the brain that control balance and a sense of orientation to gravity. Our family witnessed this once with a beagle that we had and it lasted for several weeks but gradually improved to the point of normalcy. We did not witness her eating a skink, although she could have. However, there are many other more likely causes for this behavior including, inner ear infections, cysts or tumors, head trauma, parasites, etc. I suspect that inner ear issues are a common cause.

The largest species of skink in the Southeastern U. S. is the broadhead (or broad-headed) skink, reaching lengths of nearly thirteen inches. When mature, these skinks lose the blue tail and most of their striping to become a tannish brown. Males are larger than females and have a reddish color on the head, which intensifies during the breeding season. If you want to identify this species as a juvenile, you will need to look at the scales on the underside of the tail to separate it from the two species of five-lined skinks that inhabit our area. The central row of scales will be significantly wider than the other rows on either side. Broadheads have powerful jaws and will bite if harassed. If you want to see two males engaged in epic combat, give a watch to this YouTube link: https://www.youtube.com/watch?v=Z8qbexnZWew . Their stamina is truly amazing and they definitely come out with some battle scars.