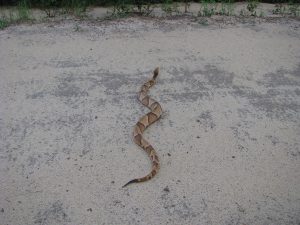 There are approximately 44 species of snakes found in Florida.  The Southern Copperhead is one of the six venomous snakes that one might encounter while outdoors in the panhandle of Florida.    A uniquely beautiful and secretive snake, they historically have only been found in the panhandle counties of Gadsden, Liberty, and Jackson along the Apalachicola River corridor and tributary creeks.  Preferred habitat for this species is near streams and wet areas and upland hammocks adjacent to these wet areas.  The copperhead is encountered so infrequently in Florida that there have been very few bites and no fatalities reported in Florida from a copperhead bite. 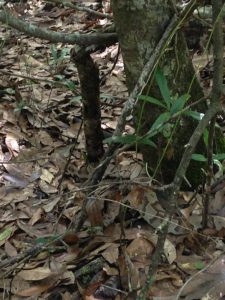 Copperheads are pit vipers and are recognizable by the dark brown, hourglass-shaped crossbands along the center of the back.  This pattern provides the copperhead with excellent camouflage to blend in with leaves and other litter on the forest floor (see photo 2.).  The same snake is pictured in photo 3, crossing a woods road before moving into the swamp edge.  This snake is approximately 30 inches long which is the typical size that most adult Southern Copperheads reach. 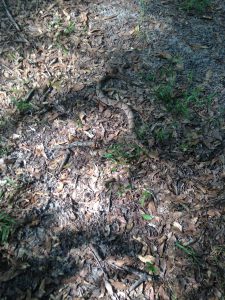 All pit vipers in Florida have venom that is haemotoxic, that is, it destroys the red blood cells and the walls of the blood vessels of the victim.  The copperhead venom  is not considered to be as potent as the venom of a diamondback rattlesnake.

Copperheads bear live young, typically from 7 to as many as 20 offspring. Young copperheads have identical coloring as the adult except the young snakes have a yellow tip on the tail.  The diet of copperheads is the most varied of Florida’s venomous snakes and includes many vertebrates and large insects.  They are patient hunters, lying camouflaged in leaves waiting on a meal.  Copperheads have been reported to climb trees when cicadas are abundant.  The lifespan of a copperhead is estimated to be 20+ years in the wild.