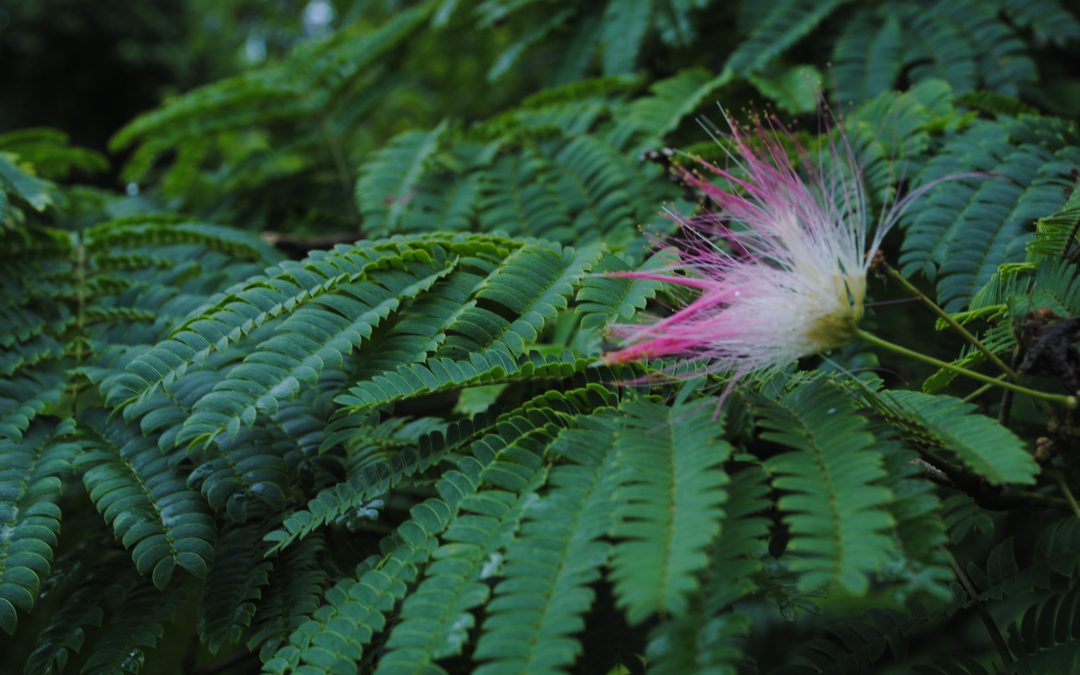 The Beautiful, but Invasive, Mimosa

It is easy to notice the display of bright pink puffs erupting on low-growing trees along roadsides. This attractive plant is the Mimosa tree, Albizia julibrissin.

These once popular small trees are commonly found in the yards of older homes in Florida where the display of prolific blooms starts up as the weather warms.

This species is also classified as invasive native to southwest and eastern China, not Florida. Many Florida residents may not realize this tantalizing beauty is actually an aggressive invader in disguise. 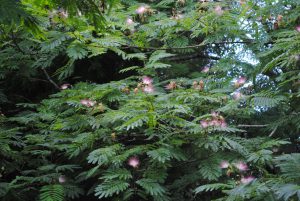 The beautiful mimosa is found throughout the Florida panhandle.
Photo: Les Harrison

It has spread from southern New York west to Missouri south to Texas. It is even considered an invasive species in Japan.

Worse yet, mimosas are guilty of hosting a fungal disease, Fusarian, which will negatively affect many ornamental and garden plants. Some palms as well as a variety of vegetables will succumb to this pathogen.

In natural areas the invader will disrupt not only other plants, but also the birds, mammals, amphibians, and insects which depend on the displaced plants for food, shelter and habitat. Other negative traits include the disruption of water flow and aiding the incidence of wildfires.

In natural areas, mimosas tend to spread into dense clumps blocking the light to native plants which prevents them from growing. They are prominent along the edges of woods and wetland areas where seeds scatter easily and take advantage of sheltered, sunlit spots.

Mimosa tree seeds can stay viable for many years in the soil. These seeds will float without damage to their germination potential until they wash ashore to colonize a new site.

Additionally, Mimosa tree seeds are attractive to wildlife. One tree in a yard can infest many acres with the aid of birds and small mammals.

Cut or wind snapped trees quickly regrow from the stump, making this one invader that is difficult to eradicate.

Fortunately, there are a variety of small trees which can replace the Mimosa tree in home landscapes. Many are attractive, but without the unrelenting need to populate the entire subdivision.

This is a beauty-and-the-beast combo tree with too many problems to compensate for its looks. 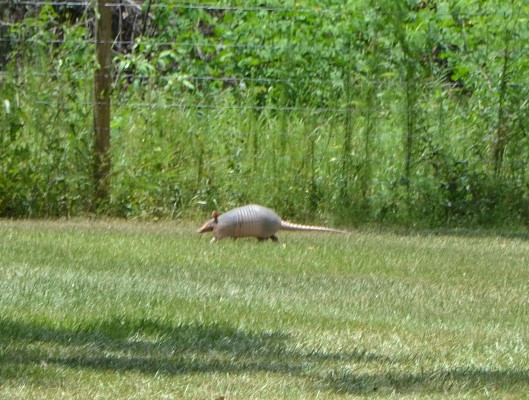 The Armored Wanderer – the armadillo 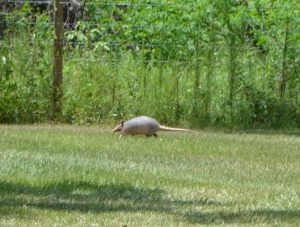 The first light of morning can reveal random pockmarks in what had been the perfect lawn the previous evening. The culprit is not likely the neighborhood teenager with a reputation for inappropriate practical jokes.

The offender usually is the nine-banded armadillo, sometimes referred to as a Florida-speed-bump or Possum-on-the-half-shell. In addition to manicured landscapes, they also encroach in natural areas and destroy sensitive habitats.

Armadillos eat adult insects and larvae, but also quail and turtle eggs. They incessantly dig holes in their search for food, many times uprooting plants in their food search. Their foraging holes are approximately one to three inches deep and three to five inches wide.

Using insecticides in landscapes to decrease the armadillo food supply is not guaranteed, but may help reduce the digging. In cases where there is a large, and always ravenous, armadillo population this reduction of food may increase digging activity as they search more diligently for a smaller food supply.

Another consideration is all chemical treatments have to be reapplied on a permanent basis for long term control. Always read and follow label instructions for safe use of insecticides.

Armadillos rest in a deep burrow during the day and are usually active after dark. Burrows openings are approximately seven to eight inches in diameter, about the size of a one-gallon plastic jug, and up to 15 feet in length.

This exotic invasive may burrow under driveways, foundations and patios potentially causing structural damage. Additionally, their burrows in pastures pose a potential leg-injury hazard to large wildlife and livestock.

Fencing is another option to discourage the presence of armadillos. Relocating captured animals is illegal and not recommended because it only transfers the problem elsewhere and can spread this problem species.

Fossil records indicate the armadillo’s ancestors were as large as modern-day rhinos. One can only imagine what front yards would look like if they still existed. 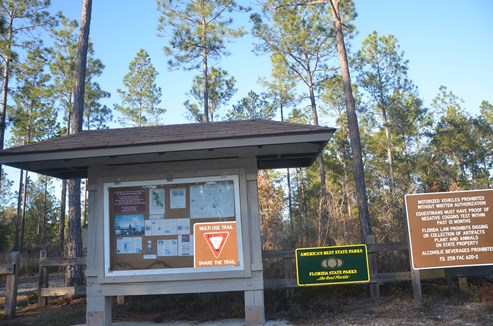 St. Marks River Preserve State Park is still being developed, but open for native habitat enthusiast and those who enjoy this environment as nature established it.

Located along the banks of the St. Marks River’s headwaters, this park offers an extensive system of trails for hiking, horseback riding, and off-road bicycling.  The existing road network in the park takes visitors through upland pine forests, hardwood thickets and natural plant communities along the northern banks of the river.

The St. Marks River is not navigable within the park boundaries. It is not conducive to canoeing or kayaking unless visitors are willing to accept long portages through thick undergrowth.

This preserve is home to a wide variety of native fauna including black bear, deer, turkey and much more.  Wildlife tracks frequently crisscross the park’s roads and trails.

At the northern end of the park two sections have had timber removed. One plot has been replanted with wiregrass seed which should germinate this year. Both areas have been planted with long-leafed pine seedlings.

This preserve offers avian aficionados the opportunity to witness nature at its finest as birds fill the air with their calls. A wide assortment of residential and migratory birds can be viewed in their natural habitat.

There are currently no amenities available at the park and it does not have restroom facilities.  Additionally, visitors must bring in water for themselves or their horse.

There are no fees presently required to enjoy this gem of a park.  Located east of Tallahassee, it is 3.5 miles east of W.W. Kelly Road on Tram Rd (Leon County Highway 259) almost to the Jefferson County line.

Adequate planning should be made to pack in and pack out all needed items for the day. The nearest convenience stores are located in Wacissa a few miles west of the park on Tram Road. 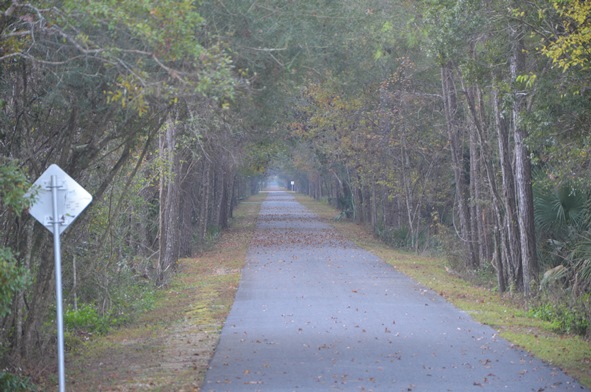 A great walk or ride is close at hand on this trail which once supported a critical 19th century transportation link.

The typical image of a state park is that of a place where visitors enter through a front gate and enjoy the wonders of nature or some historic structure. The Tallahassee-St. Marks Historic Railroad State Trail, which is run by The Florida Division of Recreation and Parks, is truly an exception to the typical model.

While many parks have trails, this one runs 20.5 miles from Tallahassee to the coastal community of St. Marks. This area is the first rail-trail in the Florida’s system of greenways and trails to be paved providing a scenic experience for running, walking, bicycling and skating.

Additionally, horseback riding occurs on the adjacent unpaved trail. Because of its outstanding qualities, this state trail has been selected as a National Recreation Trail.

The origins of this 21st century recreational site date back to before Florida was a state. The Tallahassee Railroad Company was approved in 1835 by the territorial legislative council and received the first federal land grant to a railroad for construction of the line.

Cotton and other commodities moved from the Tallahassee region to the port of St. Marks for shipment to the north east U.S. and to Great Brittan. Raw cotton was the major generator of foreign exchange during the antebellum years, so this railroad was a critical economic link in the area’s development.

Fast forward to 1983, that is when the Seaboard Coastline filed the papers to abandon the line and end service. After 147 years, the longest-operating railroad in Florida was deemed economically unfeasible to operate.

It was not out of service for long. In 1984 the corridor was purchased by the Florida Department of Transportation, and the rest is history.

Restroom facilities are placed at intervals along the trail. There are picnic pavilions and a playground at the Wakulla Station Trailhead.

The trail is open from 8:00 a.m. until sundown, 365 days a year and there is no use fee required. Donations which aid with the promotion and upkeep are accepted.

For more information on the St. Marks Trail, contact the park office at (850) 487-7989 or Tallahassee-St. Marks Historic Railroad State Trail.

While the historic structures are gone, it is a great way to enjoy nature’s wonders close to the coast. 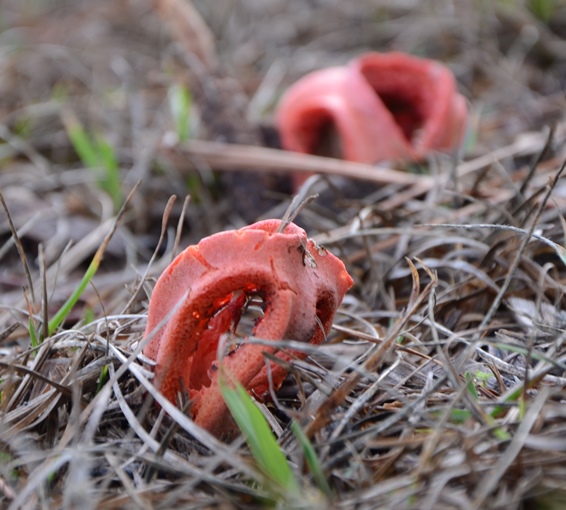 Valentine’s Day is just a few days away and this month’s theme is evidenced by the color red. Red hearts, bows, roses (imported this time of year from South America) and candy in red boxes

This hue is not frequently seen in Wakulla County in the mist of winter’s grip, but this year azaleas bloomed in January. Still, red highlights in lawns, pastures and other open areas tend to attract attention. 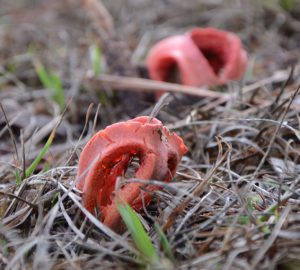 Mature Column Stinkhorns are in striking contrast to most other local mushrooms. These were growing on the edge of the UF/IFAS Wakulla County Extension Demonstration Garden where wood chips are plentiful.
Photo: Les Harrison

The reason is simple. A mushroom species is taking advantage of the cool weather and available moisture.

Clathrus columnatus, the scientific name for the column stinkhorn, is a north Florida native which is common to many Gulf Coast locales. This colorful fungus has also been known by the common name “dead man’s fingers”.

The short lived above ground structure is usually two to six inches high at maturity. This area is known as the fruiting body and produces spores which are the basis for the next generation.

Two to five hollow columns or fingers project upwards above the soil or mulch. Coloration of the fruiting body can range from pink to red, and occasionally orange.

The inner surfaces of the column are covered with stinkhorn slime and spores, and which produces an especially repulsive stench. This foul odor is useful though, attracting an assortment of flies and other insects which track through it.

A small amount of the mixture of the brown slime and spores attaches to the insect’s body. It is then carried by these discerning visitors to other bug enticing spots, usually of equal or greater offensiveness to people.  Spores are deposited as the slime mixture is rubbed off as the insects brush against surfaces.

Decaying woody debris is a favorable environment for the column stinkhorn to germinate. As the wood rots bacterial activity makes necessary nutrients available to this mushroom.

Other areas satisfactory for development include lawns, gardens, flower beds and disturbed soils. All contain bits and pieces of decomposing wood and bark.

Occasionally, column stinkhorns can be seen growing directly out of stumps and living trees. Presence on a living tree is a good indication the tree has serious health issues and may soon die.

This fungi starts out as a partially covered growth called a volva. The portion above and below the soils surface has the general appearance of a hen’s egg and is bright white.

The term volva is applied in the technical study of mushrooms, and used to describe a cup-like structure at the base of the fungus. It is one of the precise visible features used to identify specific species.

The cool wet weather currently in Wakulla County combined with local sandy soils and available nutrients create ideal growing conditions. While rarely notices during initial stages of growth, they are quickly spotted at or near maturity.

There are other stinkhorn mushrooms in Wakulla County, but they are not as common. In addition to North America, member of this fungi family with a fetid aroma can be found in Europe, Asia, South America and Australia. 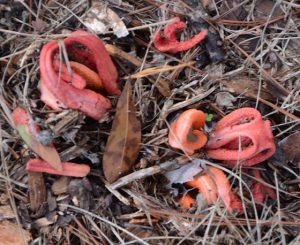 While not likely to be a Valentine’s Day gift, it still has a distinct place in the local environment. Get close and it is difficult to overlook.

To learn more about Wakulla County’s mushrooms, contact your UF/IFAS Wakulla Extension Office at 850-926-3931 or http://wakulla.ifas.ufl.edu/