All of the county honorees have distinguished themselves as creative thinkers and leaders in the agricultural community.  George Watkins, from Apalachicola, Florida was honored as an Agricultural Innovator in Franklin County by Erik Lovestrand, Franklin County Extension Director.  Read the story of Watkins Honey below.  Agricultural Innovators from other counties will be featured in Panhandle Ag e-News over the coming weeks. 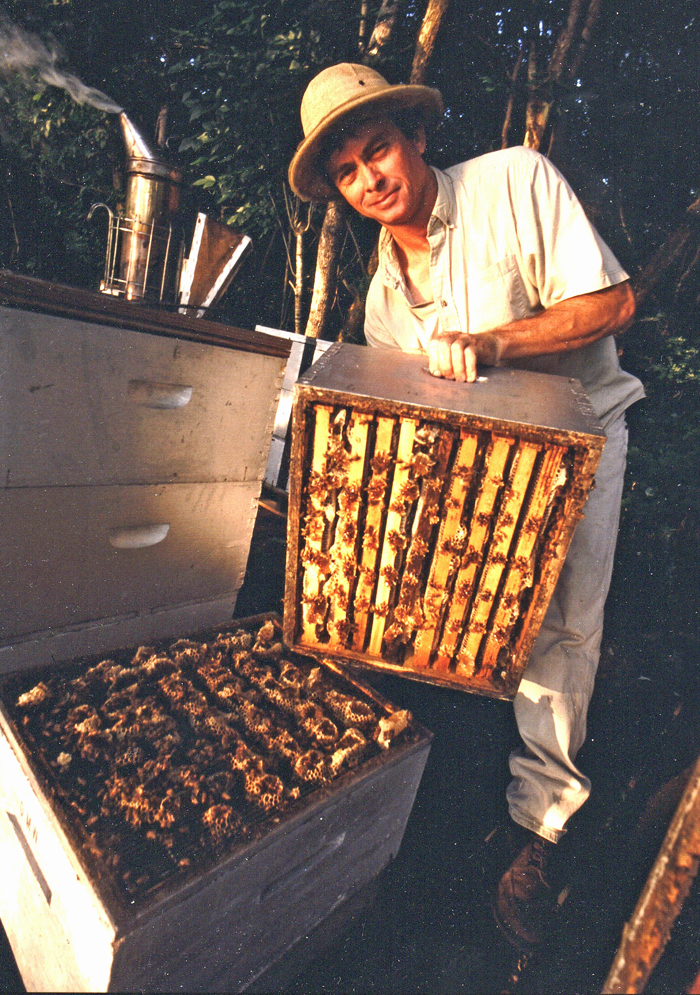 George Watkins was born and raised in Apalachicola, a small rural fishing community in the Florida Panhandle. Well known for its oyster production, Apalachicola Bay is also an important fishery for shrimp, blue crabs and fin fish. Mr. Watkins has had a hand in all of these resource-based livelihoods over the years and possesses a wealth of knowledge along with a willingness to share with others who seek to learn the ways of nature in an incredibly resource-rich part of our state. Although George has made a good part of his living on the water, he is featured here for a business that is traditionally thought of as land-based. However, leave it to George Watkins to find a way to connect Apiculture with his love of a water-based way of life.

George started beekeeping in the early 1990’s after growing up in the premier tupelo honey producing region of the world. As with all of his undertakings, he learned through a combination of his own studies and by spending time with veterans of the trade.  George was not the first beekeeper to make tupelo honey in the Apalachicola River floodplain, where the Ogeechee tupelo trees crowd the river swamp. The practice has been going on since European honey bees were first cultivated here. In fact, the bee docks where George keeps his bees currently, during the three-week tupelo bloom, were built by old timers who moved bees on barges to get the purest tupelo. 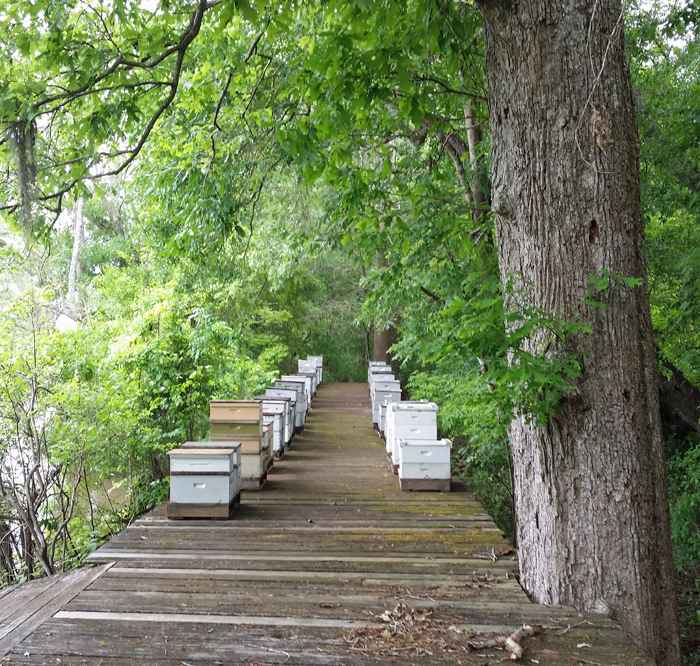 What makes George’s operation so innovative is that the entire operation can be pulled off by only two men. George and his longtime partner Jimmy Moses have been moving up to 160 hives each year onto the river docks that he now leases from the State of Florida to make a table-grade honey that can be matched by no other (in the words of many experts). The big move each year begins by pulling honey boxes from the bee yards and giving the bees empty comb the day before the night loading. Hives are loaded onto Watkins’ self-built pontoon barge with a small tractor during darkness and netted for the drive to the river launch at Bloody Bluff. Upon arrival at the bee dock the men activate a small, motor-driven garden implement that has been customized with front loading forks to pick up the hives.  Up the ramp they go to be set out on the dock right in the midst of the best tupelo habitat. When the short season concludes the process is reversed, with honey coming off first, then usually a couple of more trips to get all of the bees off the river.

Through all of the years of surviving poor honey flows, yellow flies, bee pests, hungry black bears, cows knocking over bee hives and many other difficulties, Watkins Honey, Inc. is still producing what may well be the purest, best tasting honey in the world. Oh, and you can bet that George and Jimmy have endured numerous bee stings. When you handle a few million bees in the dark, you can imagine the bees are not in the best of moods.

George has participated in beekeeping demonstrations and lectures at public events to educate the public about tupelo honey production for many years. He has shared his knowledge and talents freely with Extension staff in Franklin County. George has participated in local Extension beekeeping classes and even helped set up a hive for the local extension agent. He remains a treasure trove of historical and natural history information and valued local asset for many.

Georges has been very involved over many years with sharing his knowledge and love of beekeeping and specifically tupelo honey production for the betterment of the industry. He was involved with providing expertise and support for the making of the acclaimed movie “Yulee’s Gold” that starred Peter Fonda.  He has been featured by several organizations in publications and interviews including the Southern Foodways Alliance and Garden and Gun Magazine. He has been featured in several food related weblogs including “The Kitchn” and “Dixie Dining.” He remains the primary local producer of tupelo honey in the Lower Apalachicola River Basin and is based in the bayside community of Apalachicola.