We Had Plenty of Rain; Why Are My Trees Dying?

Most trees are not well adapted to saturated soil conditions.  With nearly daily rainfall this spring and summer, sometimes in record amounts, the ground became inundated with water.  When the root environment is dramatically changed by excess moisture, especially during the growing season, a tree’s entire physiology is altered. This condition may result 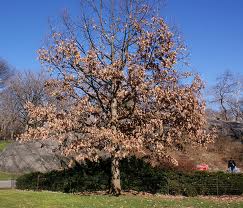 in the death of the tree.

Water saturated soil reduces the supply of oxygen to tree roots, raises the pH of the soil, and changes the rate of decomposition of organic material; all of which weakens the tree, making it more susceptible to indirect damage from insects and diseases.  Additionally, with heavy rainfall there is erosion and sediment movement.  Exposed roots or roots covered by excess soil add stress to plants.  When the rain finally stops, often the tree’s system has been so compromised that it can’t perform the vital functions necessary to survive – it just dies.

When the ground becomes completely saturated a tree’s metabolic processes begin to change very quickly.  Photosynthesis is shut down within five hours; the tree is in starvation mode, living on stored starches, unable to make more food.  Water moves into and occupies all available pore spaces that once held oxygen.  Any remaining oxygen is utilized within three hours.  The lack of oxygen prevents the normal decomposition of organic matter which leads to the production and accumulation of toxic gases such as carbon dioxide, methane, hydrogen sulfide and nitrogen oxide.

Additionally, within seven days there is a noticeable root growth loss.  Roots only develop when soil oxygen levels are at 5% -15%.  Over time, the decaying roots are attacked by pathogens.  The loss of root mass from decay and fungal attack leave the tree prone to drought damage.  After only two weeks of saturated soil conditions the root crown area can have so many problems that decline and even death are imminent.

For plants to function there is a need for nutrient uptake.  However, in saturated soil anaerobic organisms, primarily bacteria, replace the aerobic organisms that once existed in the soil.  These bacteria convert the nitrogen into forms that are unavailable to plants.  Also, manganese, iron and sulfur become limited because the soil pH has increased, making the elements unrecognizable.  With little to no functioning root system, the trees in saturated soils do not have the means to uptake nutrients, even if they were available.

When a tree experiences these anaerobic soil conditions it will exhibit symptoms of leaf loss with minimal to no new leaf formation.  This usually appears two to eight weeks after the soil dries out again.  Many trees will not survive, especially the more juvenile and mature trees.  However, well established trees may still decline several years later, if they experience additional stresses such as drought or root disturbance from construction.

There is little that can be done to combat the damage caused by soil saturation.  However, it is important to enable the tree to conserve its food supply by resisting pruning and to avoid fertilizing until the following growth season.  Removal of mulch will aid in the availability of soil oxygen.  Basically it is a “wait and see” process.  While water is essential to the survival of trees, it can also be a detriment when it is excessive.