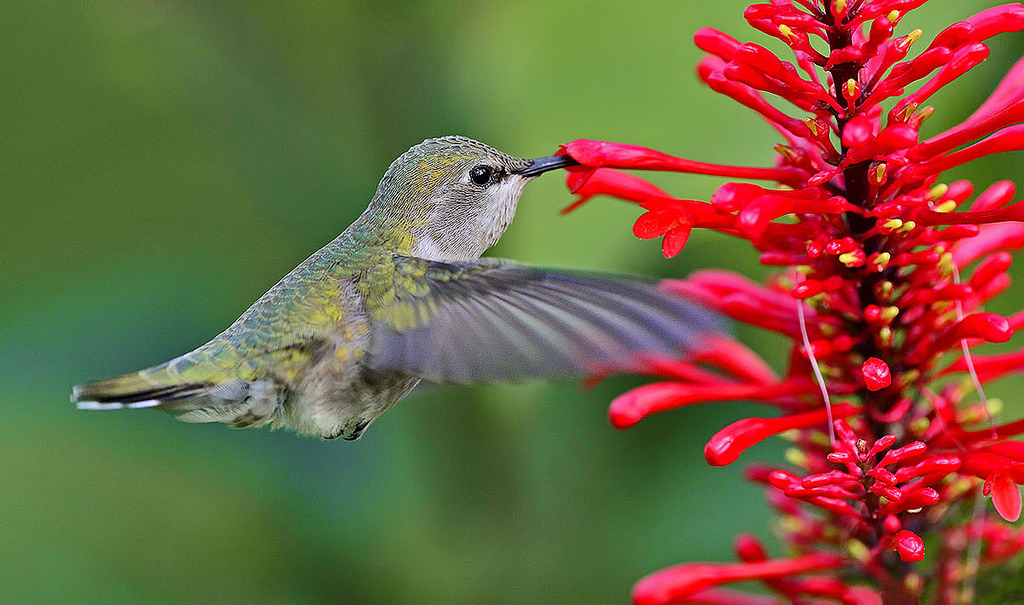 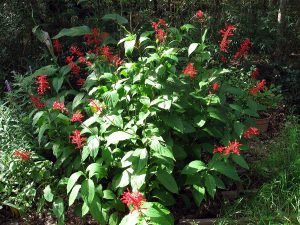 Looking to add something to brighten your landscape this autumn?   Firespike (Odontonema strictum) is a prolific fall bloomer with red tubular flowers that are very popular with hummingbirds and butterflies.  Its glossy dark green leaves make an attractive large plant that will grow quite well in dense shade to partial sunlight.

In frost-free areas firespike grows as an evergreen semi-woody shrub, spreads by underground sprouts and enlarging to form a thicket.  In zones 8 and 9 it usually dies back to the ground in winter and re-sprouts in spring, producing strikingly beautiful 9-12 inch panicles of crimson flowers beginning at the end of summer and lasting into the winter each year. 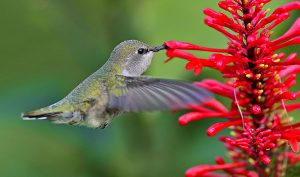 Firespike is native to open, semi-forested areas of Central America.  It has escaped cultivation and become established in disturbed hammocks throughout peninsular Florida, but hasn’t presented an invasive problem.  Here in the panhandle, firespike will remain a tender perennial for most locations. It can be grown on a wide range of moderately fertile, sandy soils and is quite drought tolerant.  Firespike may be best utilized in the landscape in a mass planting. Plants can be spaced about 2 feet apart to fill in the area quickly. It is one of only a few flowering plants that give good, red color in a partially shaded site. The lovely flowers make firespike an excellent candidate for the cutting garden and is a “must-have” for southern butterfly and hummingbird gardens.  Additional plants can be propagated from firespike by division or cuttings.  However, white-tailed deer love firespike too, and will eat the leaves, so be prepared to fence it off from “Bambi”. 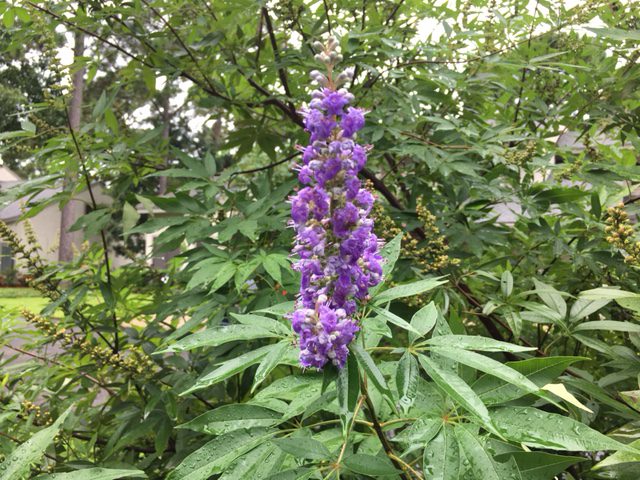 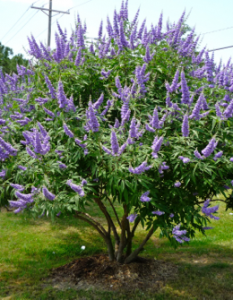 The showy chaste tree makes an attractive specimen as the centerpiece of your landscape bed or in a large container on the deck.  Much more of them are being seen since the Florida Department of Transportation has recognized the tree as a desirable median planting.  Easy-to-grow, drought resistant, and attractive to butterflies and bees, Vitex agnus-castus is a multi-stemmed small tree with fragrant, upwardly-pointing lavender blooms and gray-green foliage.  The chaste tree’s palmately divided leaves resemble those of the marijuana (Cannabis sativa) plant; its flowers can be mistaken for butterfly bush (Buddleia sp.); and the dry, darkened drupes can be used for seasoning, similar to black pepper, making it a conversation piece for those unfamiliar with the tree.

Vitex , with its sage-scented leaves that were once believed to have a sedative effect, has the common name “Chastetree” since Athenian women used the leaves in their beds to keep themselves chaste during the feasts of Ceres, a Roman festival held on April 12.  In modern times, the tree is more often planted where beekeepers visit in order to promote excellent honey production or simply included in the landscape for the enjoyment of its showy, summer display of violet panicles. 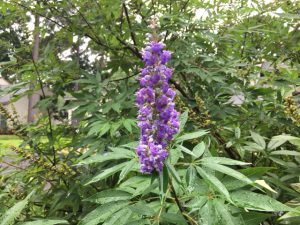 Chaste tree is native to woodlands and dry areas of southern Europe and western Asia.  It will thrive in almost any soil that has good drainage, prefers full sun or light shade, and can even tolerate moderate salt air.  Vitex is a sprawling plant that grows 10-20 feet high and wide, that looks best unpruned.  If pruning is desired to control the size, it should be done in the winter, since it is a deciduous tree and the blooms form on new wood.  The chaste tree can take care of itself, but can be pushed to faster growth with light applications of fertilizer in spring and early summer and by mulching around the plant.  There are no pests of major concern associated with this species, but, root rot can cause decline in soils that are kept too moist. 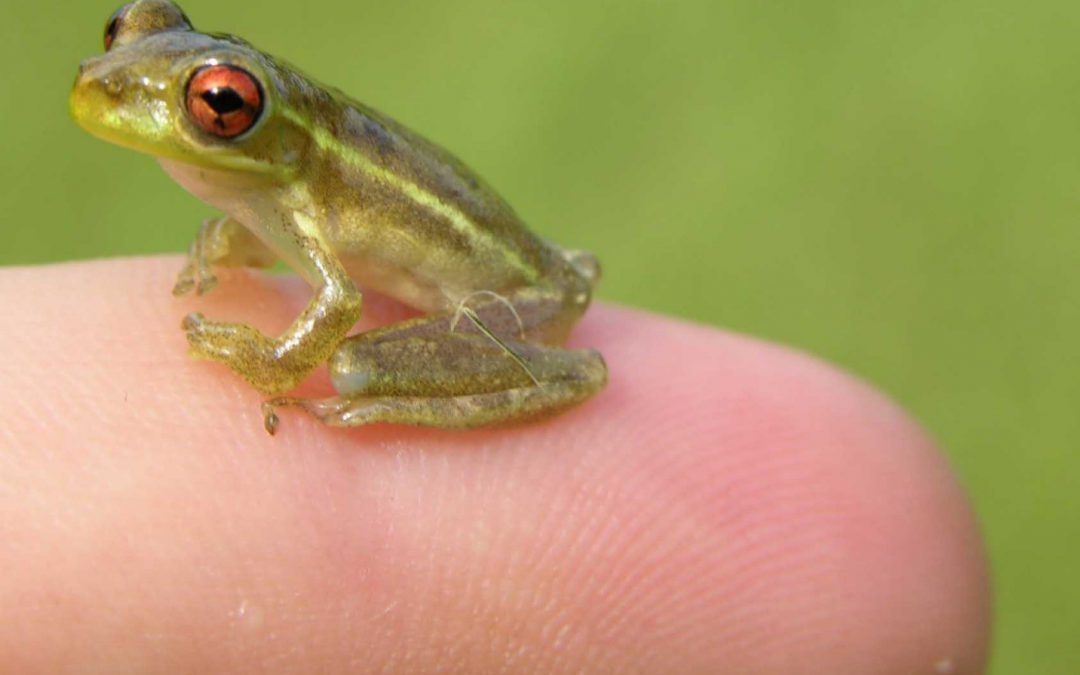 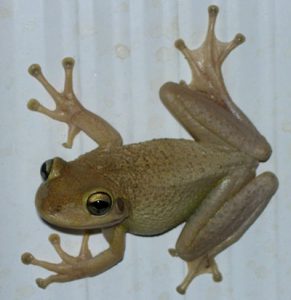 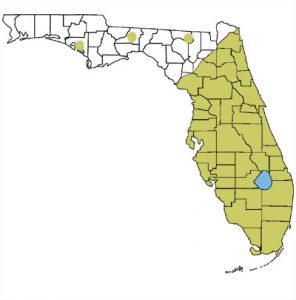 The Cuban treefrog, Osteopilus septentrionalis, was accidently introduced to Florida in the 1920’s as a stowaway in shipping crates from the Caribbean.  Over the last hundred years, the invasive frog has managed to spread throughout Florida and the Southeastern U.S. by hitchhiking on ornamental plants, motorized vehicles, and boats.  Though occasional cold winters have created temporary population setbacks, new generations of Cuban treefrogs continue to be reported in north Florida, including the Panhandle.

An invasive species is generally defined as a plant, animal or microbe that is found outside of its native range, where it negatively impacts the ecology, economy or quality of human life. Cuban treefrogs come out at night to feed on snails, millipedes, spiders and a vast array of insects.  But, they are also predators of several Florida native frogs, lizards and snakes.  Tadpoles of the invasive Cuban treefrog have been shown to inhibit the growth and development of native Southern toad and green treefrog tadpoles when all of the species are in the same water body.  Additionally, a large female Cuban treefrog can lay over 10,000 eggs per season in very small amounts of water. 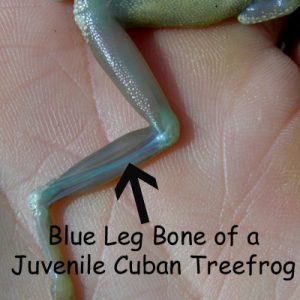 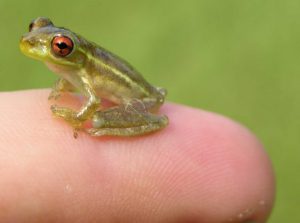 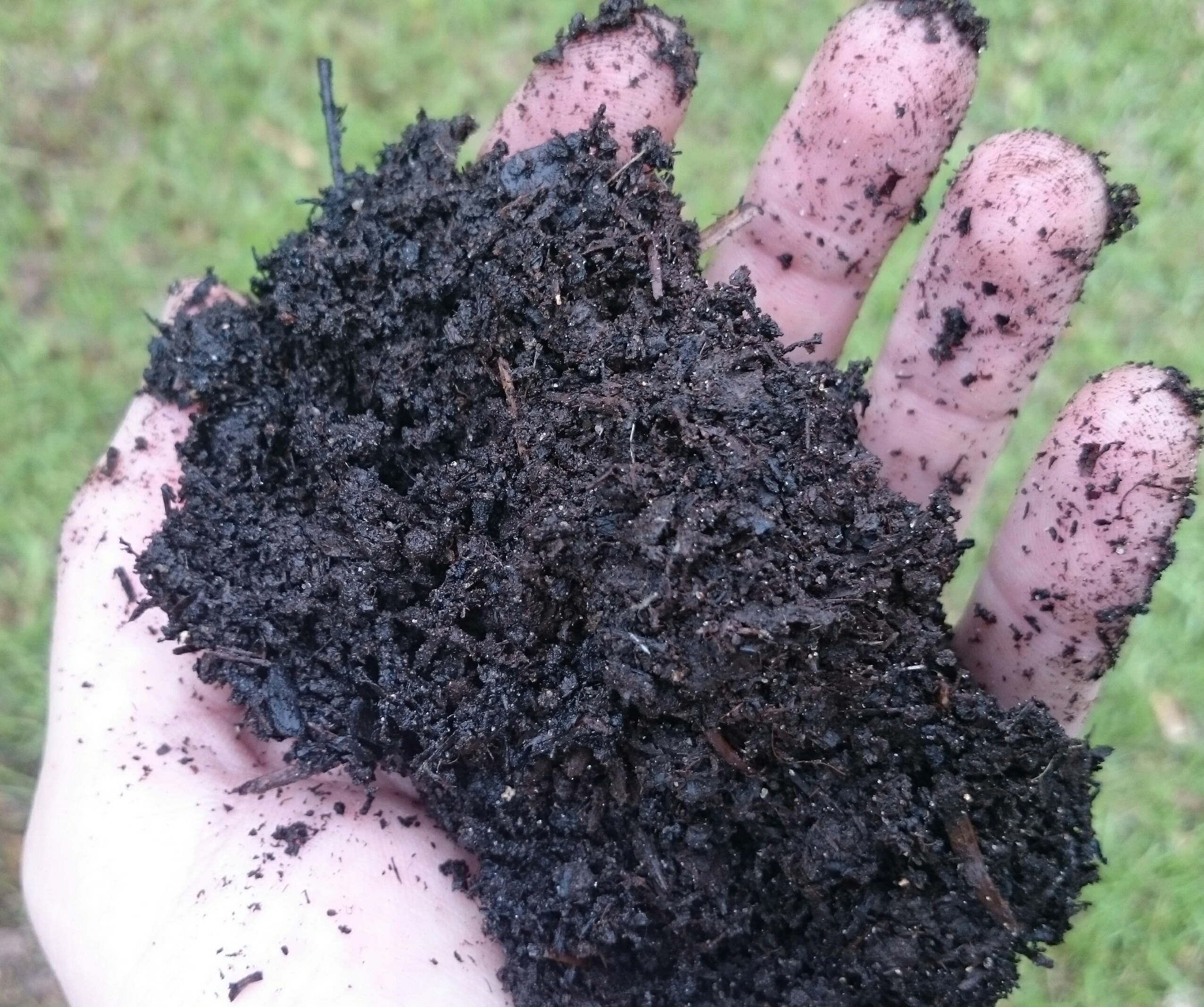 The “Dirt” on Soil

Potting soil, potting mix, garden soil, topsoil.  The bags are all sitting side-by-side on the shelf at the garden center.  Your challenge is to figure out which one you need for your project.  What’s the difference?  To begin with, none of them are dirt.  The Soil Science Society of America defines dirt as “displaced soil”, the dead nuisance material left on your hands after working with soil.  Soil is a blend of sand, silt, clay and organic matter.  It is alive with nutrient and water holding components.  But, all soil is not equal.

Soil contains decayed organic remains.  It may be composted leaf tissue and/or microorganisms.  The terms potting soil and 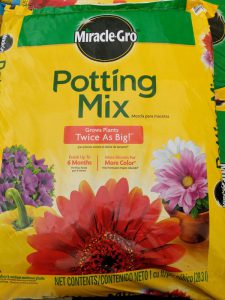 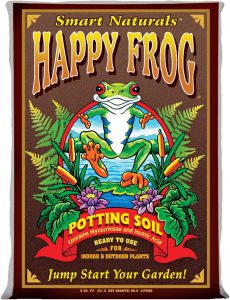 potting mix are often used interchangeably, but there is a significant difference.  Potting soil contains compost or the flora responsible for the breakdown process.  Potting mix is soil-less.  It is a blend of sphagnum moss, coir, bark, perlite and/or vermiculite.  While these are natural occurring materials, they are in their original state.  No decomposition has occurred.  In the absence of compost, the resulting potting mix is sterile and free of fungus spores and insect eggs.  Potting mixes are excellent choices for container growing, especially for house plants.  The sphagnum moss, coir and bark hold and release water and nutrients, while the vermiculite or perlite keep the mix loose and well-drained.  Some blended products add microbes, which then requires the word soil be added to the packaging.  These are still suitable for potted plants.

But, if the potting soil is made from mostly compost, the potential of having poor drainage and fungus gnat problems increases substantially.  The only containers these type of potting soils should be used in are raised gardens.  Depending on the compost source, these soils can sour, grow mushrooms or become extremely hard. 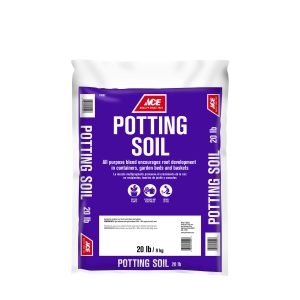 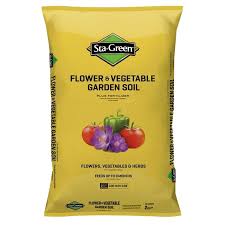 Garden soil is a blend of soil and soilless ingredients.  It can be used in very large containers (24” or greater) or added to native soils to enrich planting areas.

Then there is topsoil.  It varies widely in composition and quality.  Use it to fill holes in the yard, build berms or mix it will compost to increase water retention in dry garden areas. 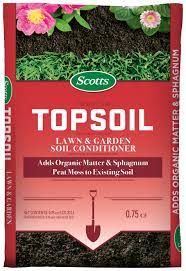 So, when standing in the store comparing prices, don’t let price dictate your purchase.  To keep your containerized plants doing well, do some bag reading.  Choose the product that has aged forest products, sphagnum moss and perlite.  Use the soils made from bio-solids and composted materials to improve the sand in the yard.  When you’re done, go wash the dirt off your hands. 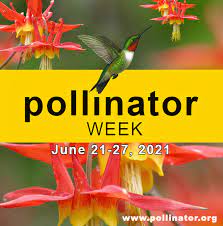 Are you one of those that hear the word “pollen” and sneeze?  For many, allergies are the only association with plant pollen. But pollination – the transfer of male pollen grains into the female flower organs to create fertile seeds – is an essential part of a healthy ecosystem.  Pollinators play a significant role in the production of over 150 food crops. Corn and rice are wind pollinated.  Just about everything else, including chocolate, depends on an insect, bird or mammal.  Successful pollination of a single flower often requires visits from multiple pollinators.  But, there are also plants that need a specific species in order to complete the task.  They are so interdependent that if one disappears, so will the other.

Unfortunately, reports from the National Research Council say that the long-term population trends for some North American pollinators are “demonstrably downward”.

In 2007, the U.S. Senate unanimously approved and designated “National Pollinator Week” to help raise awareness.  National Pollinator Week (June 21-27, 2021) is a time to celebrate pollinators and spread the word about what you can do to protect them.  Habitat loss for pollinators due to human activity poses an immediate and frequently irreversible threat.  Other factors responsible for population decreases include: invasive plant species, broad-spectrum pesticide use, disease, and weather.

So what can you do?

There’s a new app for the last two.

The Bee Smart® Pollinator Gardener is your comprehensive guide to selecting plants for pollinators based on the geographical and ecological attributes of your location (your ecoregion) just by entering your zip code.  http://pollinator.beefriendlyfarmer.org/beesmartapp.htm

Filter your plants by what pollinators you want to attract, light and soil requirements, bloom color, and plant type.  This is an excellent plant reference to attract bees, butterflies, hummingbirds, beetles, bats, and other pollinators to the garden, farm, school and every landscape.
The University of Florida also provides a website to learn the bee species and garden design.  Go to: https://ffl.ifas.ufl.edu/bees/Bee

or go on-line to see a list of pollinator-attracting plants. https://gardeningsolutions.ifas.ufl.edu/design/gardening-with-wildlife/bee-plants.html

Not only can you find out which plants attract pollinators, you will be given the correct growing conditions so you can choose ‘the right plant for the right place’.

Remember, one out of every three mouthfuls of food we eat is made possible by pollinators.