Are you guilty of “Crape Murder”, the dreaded horticultural sin that involves lopping off your beautiful Crape Myrtles fence post high and creating gnarly looking knuckles?  No need to raise hands, you know who you are!  Despite the cruelness of this act, all is not lost; there is still time to repent and change your ways!  The facts of the matter are, if you have made a habit of lopping the tops off your crapes, you are most definitely not alone, you probably thought you were doing the right thing, and it can be corrected. 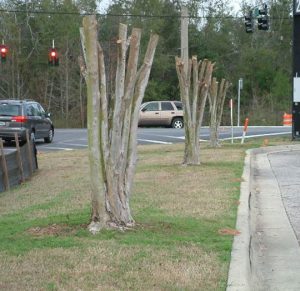 Crape Myrtle (Lagerstroemia spp.) are one of the most beautiful trees Southerners have in their horticultural arsenal.  Unsurpassed in both form and flower, it is easy to see why Crape Myrtle is the most widely planted tree in the Southeastern United States.   A mature Crape Myrtle properly grown is a remarkable sight, sinewy limbs reaching high in a vase shape supporting lilac-like flowers that come in a rainbow of colors.  These qualities make it even more strange that homeowners and landscape professionals alike insist on butchering them every winter.

Before we move on to corrective procedures, let us examine a few of the reasons that crape murder is committed.  First, I think peer pressure has a lot to do with it.  When one sees every house on the street and all the business landscapes doing things a certain way, one tends to think that is the correct way. Second, there are folks who believe that pruning their crapes back each year creates a superior flower show.  In reality, this practice creates an overabundance of succulent, weak, whippy branches (with admittedly larger flowers) that tend to bend over and break after a summer wind or rainstorm and are more prone to pests and disease.  In addition, many homeowners over prune their crapes in this way because they planted a cultivar that grows too large for the site.  There are dozens of crape myrtle cultivars sold, be mindful to pick one with a mature size and shape that will fit with the scale of the site!

So, now that we know why crape murder is committed, let’s discuss how to remedy it once the atrocity has already occurred.

If you have been guilty of crape murder, it is not too late to change your ways!  Follow these steps, get out and enjoy the cool weather, and get to correcting your mistakes while the plants are still dormant!  As always, if you have any questions about the topic of this article or any other horticultural topics, please contact your local Extension office and happy gardening!