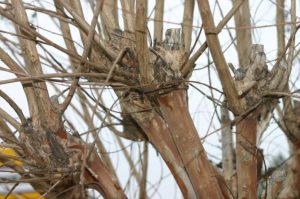 Pruning is one of the most controversial aspects of maintaining crapemyrtle. Traditionally, many crapemyrtles are routinely topped, leaving large branch and stem stubs. This practice has been called “crape murder” because of the potential impacts on the crapemyrtle health and structural integrity. Topping is the drastic removal of large-diameter wood (typically several years old), with the end result of shortening all stems and branches.

Hard pruning (topping) stimulates crapemyrtle sprouting from roots, upper stems, or the base of main stems.  If basal and root sprouts are not removed, one or more may form woody stems that eventually compete with existing main stems. These additional or competing stems may result in poor form and structure, such as stems that rub against each other.

Topping typically delays flowering up to one month compared to unpruned crapemyrtle. On some cultivars, topping also shorten the season of bloom. Long-stem sprouts emerge just below large-diameter cuts that result from topping. These sprouts usually develop into upright, unbranched stems that eventually flower, often bending under their own weight. Rain or wind storms can cause extreme bending and some will break because they are weakly attached to the main stem.

Topping removes large amounts of starches and other food reserves stored within branches. Topping dramatically reduces the size of the plant canopy, ultimately decreasing the plant’s ability to produce food (starches) through photosynthesis. The large branch stubs caused by topping result in large areas of exposed wood that allow access by insects and wood-rotting organisms, weakening the plant’s structure. Finally, topping results in many dead stubs throughout the tree.

Proper pruning may be needed, just like any other tree. Lower limbs of crapemyrtle are removed to increase clearance for pedestrians or vehicles. Stems are cut to increase branching. Other pruning may be conducted to direct growth away from structures, stimulate flowering, and remove spent flowers, seed capsules, and dead or damaged branches and twigs.

Properly placed, crapemyrtle is a low-maintenance plant needing little or no pruning. Problems with overgrown, misshapen, or misplaced crapemyrtle can be greatly reduced with proper selection of crapemyrtle cultivars, proper plant selection at the nursery, and proper placement in the landscape. For more information on cultivar selection go to: http://edis.ifas.ufl.edu/mg266.

If pruning is necessary, use the following recommendations: