The Virus was First Discovered in Plants

Did you know that the first virus discovered was in plants, not in humans? As early as 1857, tobacco farmers in the Netherlands recognized a new disease of tobacco. It wasn’t called a virus at the time as the causal agent was unknown. In 1886, Adolph Mayer, a German agricultural chemist, determined that the “tobacco mosaic” disease could be transmitted to healthy plants by rubbing them with infected leaf sap. 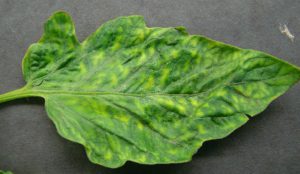 When taking a plant pathology course in college, it amazed me that viral organisms were ever discovered. They are extremely small. So small that it was not until the development of the electron microscope in the late 1930s that scientists were able to see the structure of the tobacco mosaic virus. Viruses are 20 – 250 nanometers in diameter, about 100 times smaller than bacteria.

The discovery of fungi and bacteria came before the discovery of viruses as the cause for plant diseases. In most cases, we have many chemical options for control of fungal and bacterial diseases in plants. But there are few to no chemical options to control viral organisms in plants. By the nature of how a virus operates in a plant cell, chemical control results in death of the host cell, surrounding tissue and possibly the whole plant.

Control of viruses in plants involves eliminating the source of the virus such as nearby weeds, control of insect vectors that transmit the disease such as aphids and thrips and use of resistant plants.

Historically, plant diseases have caused major impacts on humans. In 1845, the Potato Famine in Ireland was caused by the fungus Phytophthora infestans. This disease was responsible for the death of more than 1 million people as it devastated the production of the potato as a major food source at the time and is credited for the beginning of plant pathology as a science. Cryphonectria parasitica, an introduced fungus, essentially wiped out the American chestnut as the dominant tree in the eastern U.S. forests during the early 1900s. The excellent wood was used to build homes and the nutritious nuts were eaten by humans and fed to livestock. Currently, UF/IFAS plant pathologists are working to solve Citrus Greening, a bacterial disease that has severely damaged the citrus industry and has the potential to completely eliminate citrus production in Florida.