Horsehair fungus–a mystery in the woods 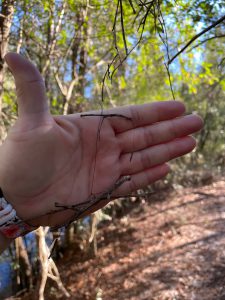 Imagine walking through the woods, enjoying the fresh air and birdsong, when you notice a twig just dangling midair. On first glance, you might presume it is stuck in a vine or a large spider web. However, this material is thinner than a vine and there are no spiders or webs to be found. On closer inspection, you see the twig is entangled in a dark knot of string, slightly thicker than a human hair. Following the source of the black string leads to a lacy network of the same material, flat against and around the branch from which the twig hangs. Fifteen feet down the trail, you come across the same thing—more twigs hanging from “string” in the trees, dangling from a knot of thin black material. What is going on here?

After some research, my conclusion is that we have come across horsehair fungus (Mirasmius spp). Mushrooms and other fungi have long, thin, rootlike structures called rhizomorphs. Rhizomorphs are composed of large numbers of microscopic hyphae, which are tubular and exchange nutrients and water among other parts of the fungus. The hyphae are typically located underground, but in this instance, they are visible in the open. 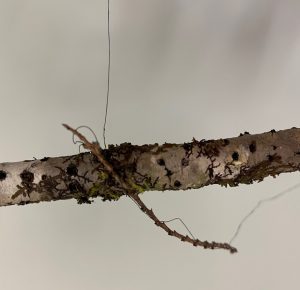 The ropy network of rhizospheres is visible on the branch, then turns into thin fibers that can trap plant debris. Sample provided by Suzy Marshall.

Aerial rhizomorphs are an excellent example of an evolutionary strategy known as resource partitioning. By forming a netted trap to intercept falling leaf material on a tree, the fungus gets a jumpstart on the decomposition process, taking nutrients from dying plant material before it falls to the ground. The tree-dwelling fungus is thus not competing directly with fungi on the ground, and both types of fungi can thrive. In human terms, this is loosely analogous to co-workers labeling their own food in a shared refrigerator. Everyone eats, but no one has to compete with another for nutrition. 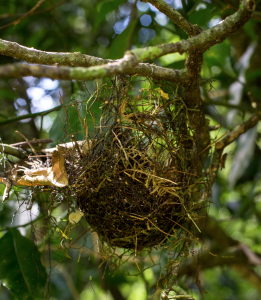 The common name, “horsehair fungi” applies to many species around the world. They are most common in nutrient-poor subtropical and tropical forests, where any available nutrients in the soil are used up quickly by the lush tree growth. They can be found here along the Gulf Coast, up to the Appalachian Mountains, and as far away as equatorial rainforests. In a Malaysian study, researchers found that the aerial fungi trapped up to 225 pounds of fallen plant material per acre! This network of material also supported a significant population of arthropods, which were crucial parts of the overall ecosystem by providing pollination, herbivory, and serving as detritivores. One study of spruce-fir forests in the northeastern United States showed that birds are known to use the material as a nest lining, as it is lightweight but very sturdy. In this particular research, 85% of the nests (particularly of warblers and thrushes) examined utilized the material.