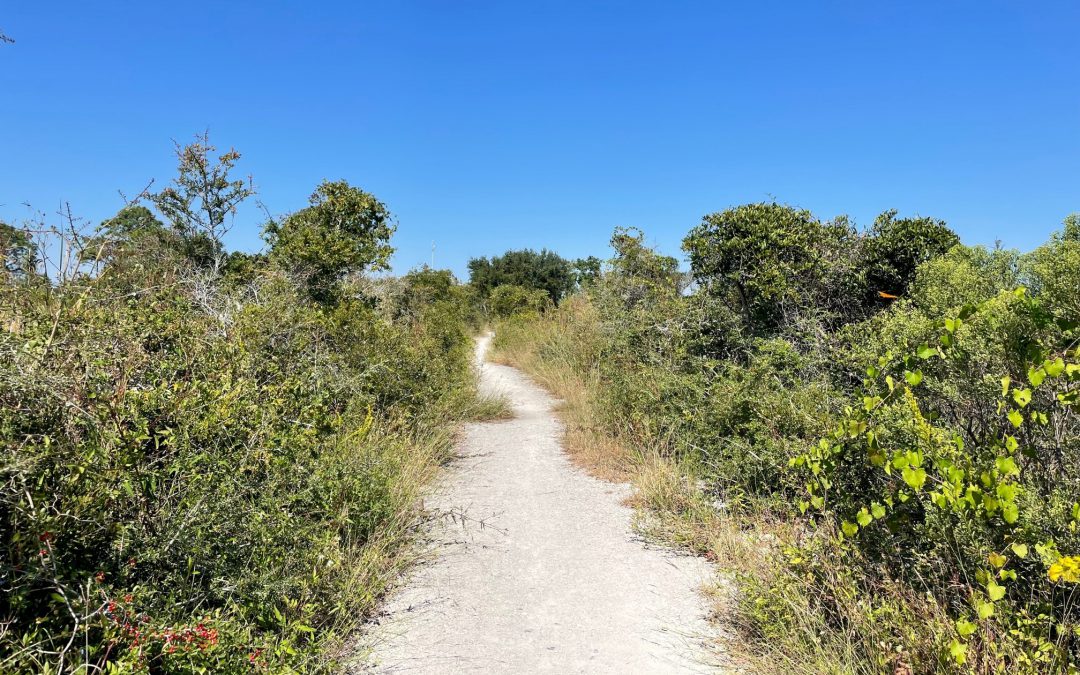 Most of us are familiar with the Appalachian Trail, the popular hiking route that follows the mountains from Maine for nearly 2,200 miles to north Georgia. But did you know you could set off from Fort Pickens at Pensacola Beach and follow the Florida Trail for over 1,100 miles, all the way to Big Cypress in the Everglades?

Inspired by the Appalachian Trail in the 1960’s, Florida Trail Association founder James Kern started gathering support and planning a route for a Florida trail that would take a trekker through nearly the entire length of the state. By 1983, the Association’s efforts resulted in recognition as a National Scenic Trail, with the path currently winding through the property of over a hundred land management partners. Some stretches of the trail are designated for biking or horseback riding, but the vast majority are intended for foot traffic only. A through-hike of the Florida Trail can be challenging, as the weather, water, and insects can be more intense in our climate than cooler areas. Dozens of people complete the journey every year, and the trail is gaining in popularity. In 2020 and 2021, fewer than 20 individuals were certified as through-hikers. However, last year 47 individuals signed the end-to-end hiker roster online, complete with their “trail name” and hometown. Many hikers are Floridians, but more than half the roster included people from other regions of the United States, and even a couple from Germany.

At the northern terminus of the trail adjacent to Ft. Pickens, hikers will experience a relatively flat, sandy path along the dunes. A bridge crosses a small freshwater pond, then the trail leads to shadier secondary dunes. On a hike this past October, I saw plenty of blooming fall wildflowers, a turtle, a frog, and numerous birds. The Blackwater Side Trail along Blackwater River State Park and Forest consists of a totally different ecosystem, with 48 miles of shady and hillier terrain. This particular stretch connects with the Alabama Trail, which is still being linked together but aims to run the entire north-south length of the state. According to those who have hiked the whole Florida Trail, the most challenging sections include mucky soil through Big Cypress and rocky, uneven limestone and grasses in south Florida. There are plenty of interesting sights and potential hazards, from alligators and black bears to flooded trail routes and pop-up thunderstorms. But the rewards are vast, too, like having the whole trail to yourself most of the time, with opportunities to see rare panthers and a 2,000-year-old cypress tree. Interested hikers can reach out to the Florida Trail Association’s Western Gate, Choctawhatchee, or Panhandle Chapters if you have questions, (including local member Helen Wigersma). These groups help maintain sections of the trail and are a wealth of information. If you’re up for a new adventure this year, you can start a real one right here in our backyard. 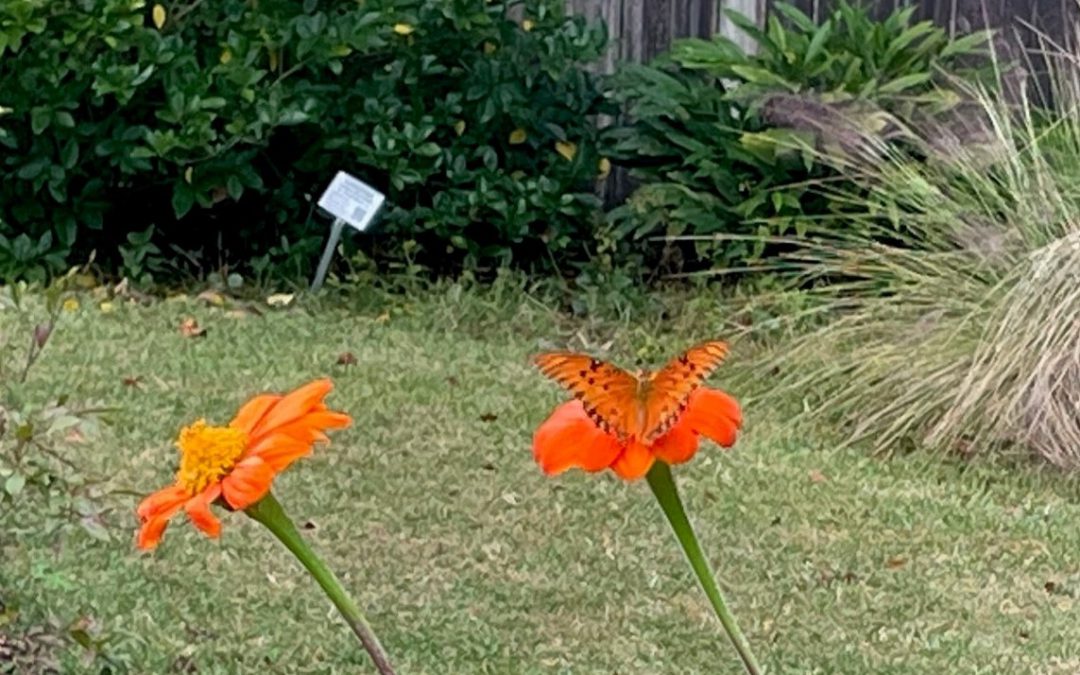 October is an important month for butterflies. The monarchs are making their epic migration towards Mexico, gracing us with their presence as they stop to feed on saltbush or lantana plants along the coast. But our homegrown orange-and-black butterfly is showing up everywhere right now, too. The Gulf fritillary (Agrautis vanillae) is a smaller species, but also features bright orange wings with black stripes and spots. Their caterpillars come dressed for Halloween, too—they are a deep orange color with black legs and spikes. While the caterpillar is not venomous to any potential predators, the spikes are quite intimidating and serve a protective function.

Fritillary (name from the Latin “chessboard”) eggs are bright yellow and laid primarily on varieties of passionflower vines, which the caterpillars feed voraciously upon. Passion vine is an important host plant for the zebra longwing as well, which is Florida’s state butterfly.

Gulf fritillaries are found in all 67 Florida counties, and may live throughout the southeastern United States, Mexico, and central and south America. They are found in varied habitats but prefer open, sunny spots in fields, forests, and gardens. The butterfly’s wing shape puts them into the “longwing” category, as their elongated wings spread wider than other species.

In the fall, fritillaries migrate to the warmest ends of their range. By spring, they move slightly north into North Carolina or interior Alabama. 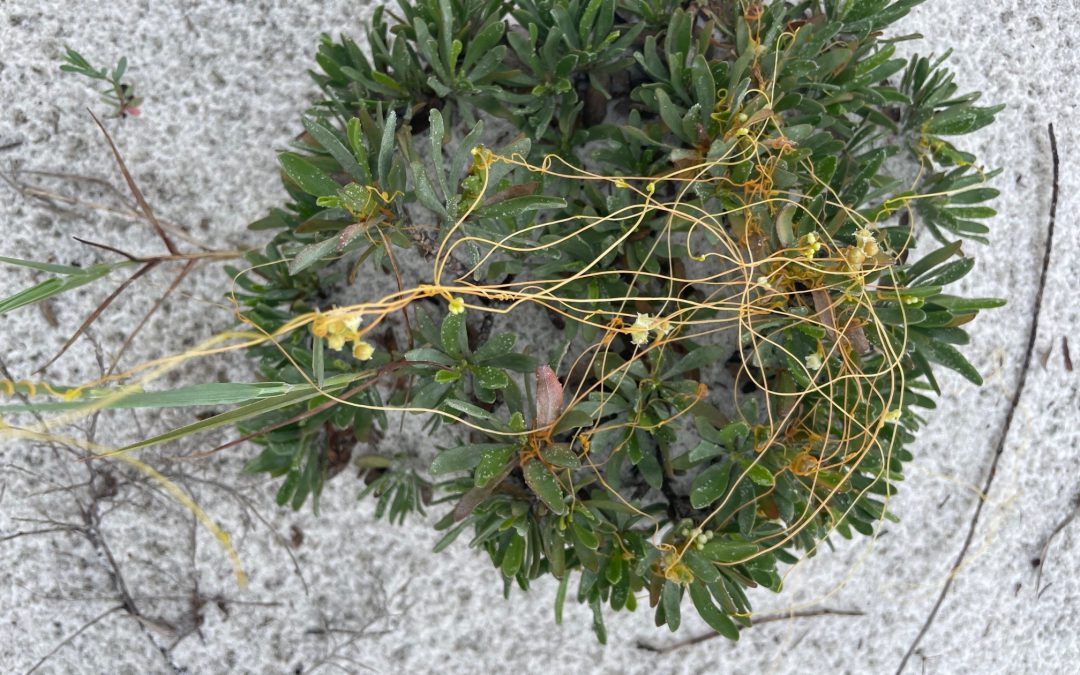 If there was a prize for “plant most resembling silly string,” dodder would win. This unusual, vining plant has the appearance of a decorative afterthought, strewn along the tops of plants at random. Dodder is a parasitic plant, with over a hundred varieties growing worldwide. Given lots of harrowing nicknames—hellbine, devil’s guts, witches’ hair, wizard’s net, fireweed, scaldweed, and strangle weed—the plant clearly freaks people out. That wariness may be warranted, as recent research shows that dodder seedlings use a chemical sensory mechanism to detect gases emitted by potential plant hosts. To put it in more human terms, baby dodder plants can “smell” a proper plant host nearby, and start creeping that direction so they can attach and feed on it. Even the botanists who study it are a bit unnerved at how animal-like the plant seems. Dodders also have RNA functions that shut down host plant defenses, allowing free flow of nutrients from the plant directly to the parasitic dodder.

Dodder is a leafless plant that stays a muted gold/yellow because it does not produce enough chlorophyll to turn green. It takes its water and nutrients from host plants via modified peg-like roots called “haustoria.” Relying completely on the host plant, mature dodder plants let go of their soil-bound roots and reattach fully to the host.

The bell-shaped dodder flowers are produced this time of year (late summer/early fall) and emerge in clusters. The round seeds are quite small (1/16”) and can lie dormant—but viable—for over ten years in the soil.

For my fellow plant nerds out there, dodder is in the genus Cuscuta, and was long considered the only member of the Cuscutaceae family. However, it has more recently been placed in the family with morning glory vines (Convolvulaceae).

I typically see small dodder vines on coastal dunes or on woody shrubs in open natural areas further inland. Despite its parasitic nature, dodder is not a huge problem locally. It can, however, be a major nuisance in clover, soybean, and tomato crops. To manage dodder infestations, both the dodder and the plants it is hosting upon should be removed before seed production. To prevent spread, equipment used in an area with dodder should be cleaned before taking to another location.

Like many plants, dodder is being researched for its pharmaceutical benefits. In an article reviewing the medicinal properties of the plant, the authors noted “More than half of the clinically approved drugs in the world are either natural products or their modifications.”   Long in use in traditional Indian and Chinese medicine for everything from tumors and ulcers to high blood pressure and migraines, modern studies show huge pharmacological promise due to anti-inflammatory, antiviral, anti-ulcer, and cancer prevention properties. While showing great potential for medicinal uses, never use a product like this without first consulting a medical professional. 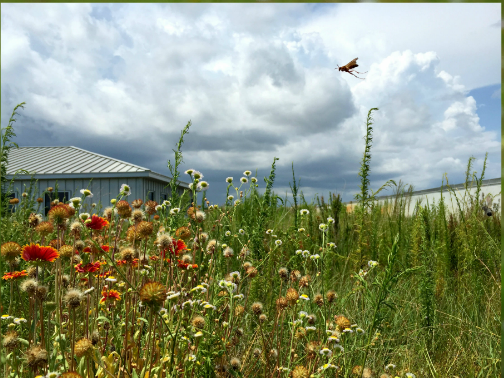 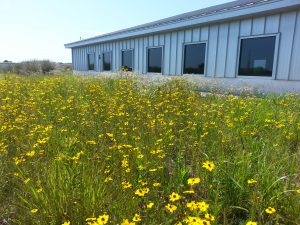 Most of us don’t think much about our roofs until there is a problem—a storm blows off shingles, causing a leak, necessitating a giant blue tarp to hold off the rain until we can get a contractor to replace the roof. But “a roof over your head” is one of those basic needs, perhaps only slightly less necessary for safety and survival than food and water.

Stormwater engineers and landscape architects have been thinking a lot about rooftops. Along with hard surfaces like roads and parking lots, roof area in a community is one of the biggest contributors of stormwater runoff. Those impervious surfaces don’t absorb any rainwater, contributing both to the volume and pollution potential of runoff from any given storm. 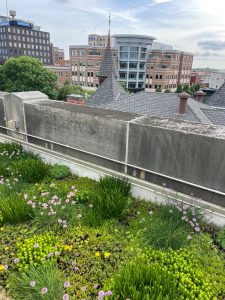 While only applicable in specific situations, green roofs can provide a practical and beautiful solution to this problem. Escambia County has been home to the state’s largest green roof since 2009, housed atop the county’s Central Office Complex (COC). At over 33,000 square feet, it can absorb nearly 20,000 gallons of water during a rain, reducing flooding in a flood-prone area and allowing rain to soak into soil instead of becoming runoff. The COC roof was part of the building’s design from the beginning, but many commercial and government buildings have added green roofs as part of a retrofit. The rule of thumb is that if the building is sturdy enough to support an additional story, it can handle the weight of a green roof—including soil, vegetation, and water storage.

Last month, I visited the green roof atop Kalamazoo, Michigan’s City Hall. The imposing art deco building was constructed in the 1930’s, but the green roof on the building’s perimeter was added in 2011. Green roofs add tremendous environmental benefits but can be cost prohibitive, so many communities find grant funding (like the state of Florida’s Nonpoint Source Management grants) to help cover the expense. The Escambia County and Kalamazoo green roofs were both funded by grants. Besides the runoff reductions, a green roof can provide significant energy savings. Vegetation buffers a building from the incredibly hot summer rooftop temperatures, reducing the use of air conditioning and stabilizing indoor temperatures. This is the case for the Escambia County roof, in which an audit showed a 33% reduction in energy needs when compared to a conventionally designed building.

Green roofs can be built on flat-topped home roofs, and many European countries use them regularly. Plant selection for green roofs varies widely based on climate. Our local roof is mostly planted with beach dune species, while cooler, less humid regions make ample use of succulents like sedums. Low growing grasses and native wildflowers are great choices everywhere, providing color with limited maintenance. 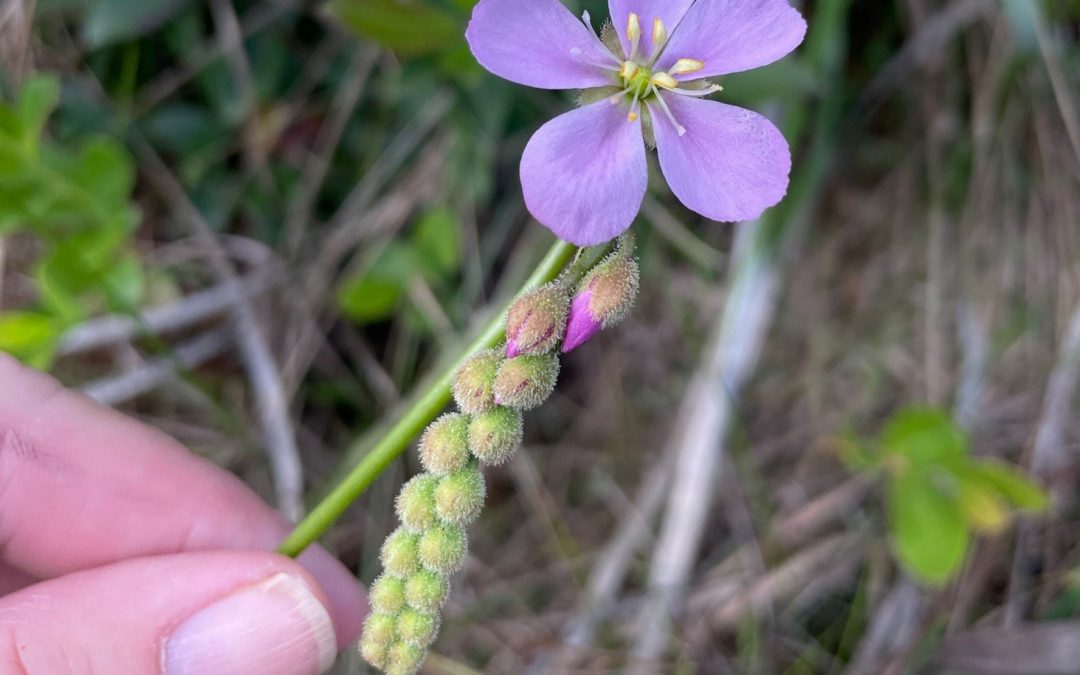 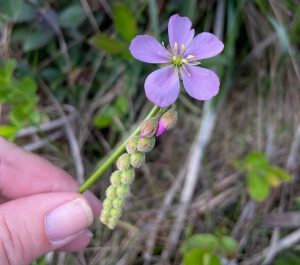 A threadleaf sundew in bloom, with its series of buds trailing down. Photo credit: Carrie Stevenson, UF IFAS Extension

The mucky, sunny spaces here in northwest Florida are inevitably full of beauty and surprises. Due to the sopping wet, acidic, and nutrient poor soil, plants in these areas must make some unusual adaptations. Wetland bogs are home to several interesting and carnivorous species, like pitcher plants and sundews. Most sundew species I come across are the tiny, pinwheel shaped dwarf sundews (Drosera brevifolia), which lie prone to the ground.

At a recent visit to the Roy Hyatt Environmental Center, I noticed a showy purple flower that at first I assumed was a meadow beauty. 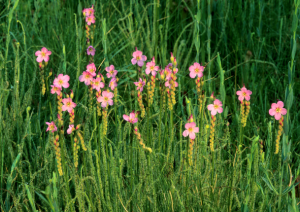 Lavender, four-petaled meadow beauty flowers are common in wet areas. However, this plant was a bit different. First, it had five petals; but even more unusual was that something akin to a green caterpillar was hanging from every flower bloom. Intrigued, I bent closer and saw that the green segments were not a dangling invertebrate, but a series of fuzzy green flower buds. The bud closest to the purple flower was a deep violet and close to flowering. 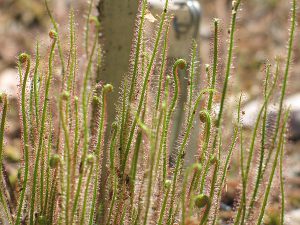 In all my years of exploring and leading people around pitcher plant prairies, I’ve encountered Tracy’s sundew/threadleaf sundew (Drosera tracyi)—a type of sundew with an upright, sap-covered stem—but never one in bloom. 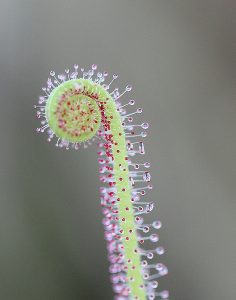 Typically, you’ll only come across the slender, threadlike ( a structure known as “filiform”) fiddlehead leaves. These leaves look more like stems, and are bright green and covered in dewy, sticky, deadly-to-insects droplets. Insects are attracted to the shimmering drops of mucus, triggering a hormone in the plant that causes the leaf and its glands to fold over the prey. Once stuck, the insects suffocate and are digested by enzymes in the leaf glands.

The purple flowers appear in May or June, atop a single leafless stem that appears unattached to the threadleaf sundew leaves. According to the Georgia Biodiversity Portal, this series of flowers will “open one by one, from the bottom of a coiled inflorescence up, with unopened buds at the top. Flowers begin to open about 9:00 am and close about five hours later; some flowers persist for two days.” Threadleaf sundews can self-pollinate but are also attractive to bees.