What to Do in the Garden in March and April 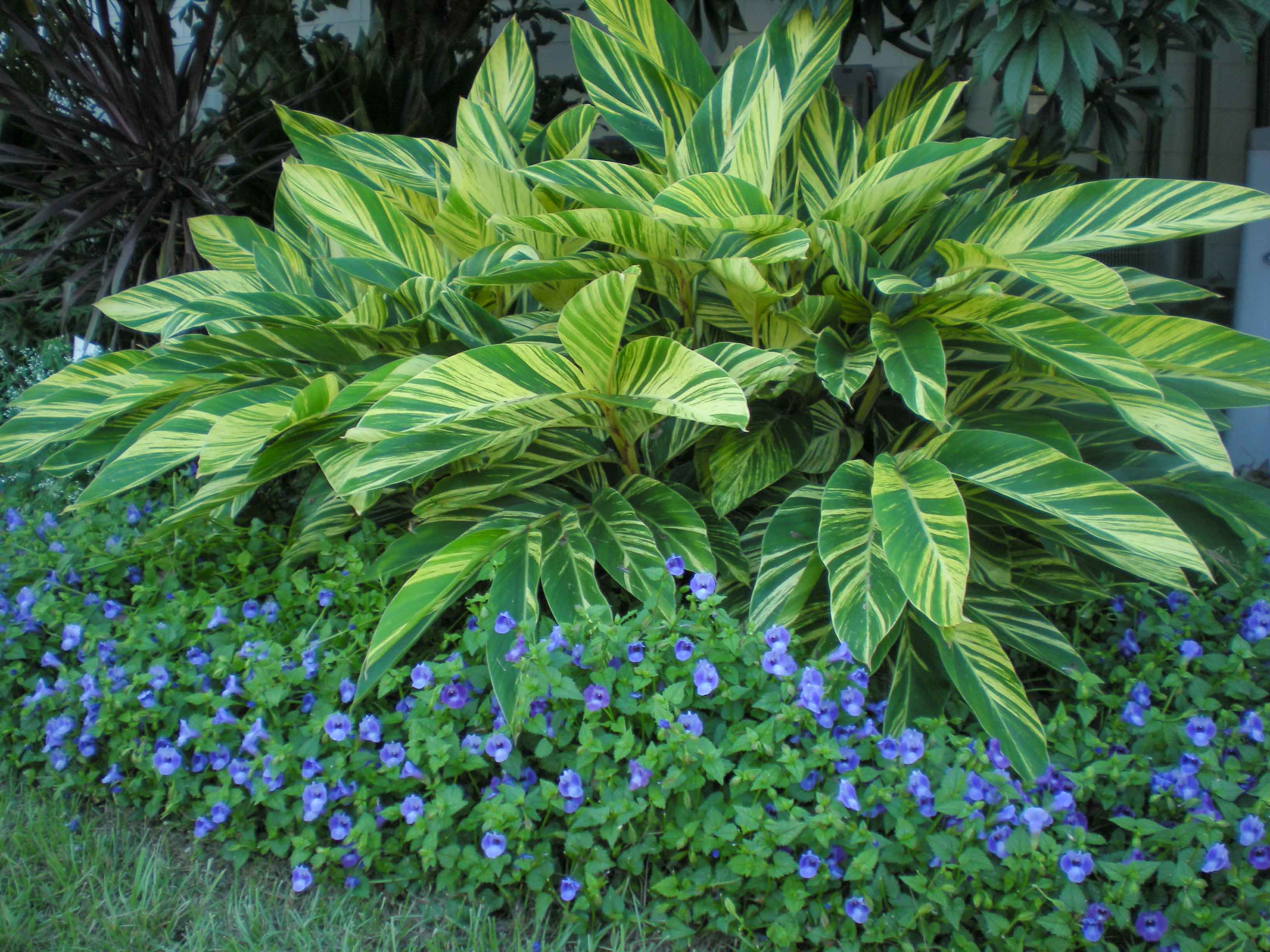 Variegated shell ginger is a good choice for adding color to shaded areas of the landscape. Photo by David W. Marshall. 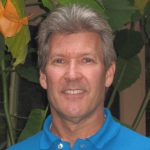 What to Do in the Garden in March and April

Except for a couple of freezes, it has been a relatively mild winter. But those freezes were cold enough and long enough to kill many tropical plants almost to the ground. Will we have more freezes? It’s possible, though after we reach mid-March, the probability drops significantly. 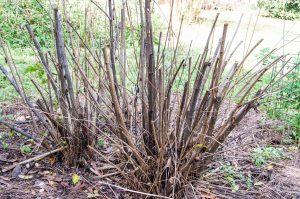 Some plants, such as this firebush, had stems killed back to the ground by the cold and will re-sprout from the root system. Photo by David W. Marshall.

So, when can you start cleaning up all the cold damaged plants? You probably have the urge to do it as soon as possible, as the brown foliage and stems are a little depressing. Many of us have lots of cold-damaged plants and we want to get the cleanup finished. First, though, examine the plants to determine the extent of the cold damage. Scrape the bark with your fingernail or use a pocketknife to see if the tissue beneath is still green or if it has turned brown due to cold damage. In many cases, you will find that the stems have been killed back to within a foot of the ground. On other plants, you may find that some of the stems still appear green higher up and you may not have to cut them back quite as far. If that’s the case, you may wish to wait until mid-March to cut these plants back. In case we have another hard freeze, the damaged growth may offer a little insulation to the undamaged parts of the plant. With most plants there’s no real need to cut them back until the new growth starts popping out, probably in late March.

The stems of butterfly gingers can be completely removed now. Many of these will just pop off when pulled lightly. Others may have to be cut, but it won’t hurt them. Variegated shell gingers, in many cases, will still have some undamaged growth mixed in below the brown leaves. You won’t kill a well-established shell ginger by cutting it back now, but because of the insulating effect of the brown leaves, it’s probably best to wait until mid-March to cut them back. 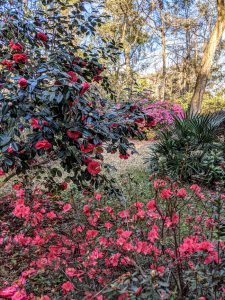 Azaleas and camellias, typical of a North Florida spring, were blooming by late February this year. If you don’t have some of these in your yard, now is a good time to plant. Photo by David W. Marshall.

You may have other shrubs that you wish to prune now also. Wait to prune spring bloomers like loropetalum and azalea until after they finish flowering. Some overgrown shrubs may need to be cut back hard to rejuvenate them, and if you do it now, they will have longer to recover. Before crepe myrtles start putting out new leaves, work on the shape of the tree. Remove poorly placed rubbing and crossover branches by cutting all the way back to the trunk or branch from where they grow. Don’t, however, top the tree unless you are purposely trying to pollard the tree and completely understand how to do it correctly. Otherwise, you will likely end up with a mess.

In mid-March, be prepared to plant warm-season vegetables such as tomatoes, snap beans, pole beans, lima beans, sweet corn, southern peas, squash, and watermelons. So, make sure you have the garden tilled before then. If you wait until April or May to plant, your harvest will be later and the insect and diseases will get much of the crop. Warm-season herbs can be added after mid-March.

Don’t be overly anxious to fertilize your lawn, especially if you have centipede grass. Wait until at least mid-March. Make sure the lawn has been fully green for three weeks before fertilizing. If this pushes you into April, fine. It’s better to fertilize too late than too early. Centipede lawns that are fertilized too early often have spring yellowing problems. St. Augustine grass is more forgiving, but don’t fertilize it either until at least mid-March. Use 6.7 pounds of 15-0-15 fertilizer per 1,000 square feet of lawn area. If the fertilizer doesn’t contain at least a third of its nitrogen in a slow-release form, though, cut the application rate in half.

Most of the weeds in the lawn now are winter annuals that will die out as the weather gets hotter. Just keep your lawn mowed regularly until they do. If you usually still have problems with weeds in the summer, though, you could use a pre-emergent herbicide to reduce the emergence of the summer weeds.

To keep fire ants out of your yard, broadcast a bait formulated product over the entire yard, according to the label directions. Plan to treat again in fall. You can quickly apply the bait using a small hand spreader available from your garden center. 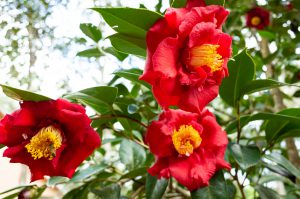 Now, before it gets hotter, add some colorful camellias to your landscape. Photo by David W. Marshall.

Now, before it gets hotter, add some colorful azaleas, camellias, roses, and loropetalum shrubs to your landscape. Also consider fragrant plants such as tea olives, banana shrubs, and sweet viburnum. The sooner you plant these in the spring, the quicker they will get established and grow.

Lavender trumpet vine (Clytostoma callistegioides), crossvine (Bignonia capreolata), coral honeysuckle, and Confederate jasmine are vines that flower during this period of the year. Now is a good time to plant them also.

Don’t forget groundcovers such as liriope, Lomandra, Mondo grass, Dianella (New Zealand flax), African iris, or any of a variety of ferns. Groundcovers planted now will have a full growing season to get established. Groundcovers are often a good choice for plantings in front of the house where you don’t want tall shrubs.

Add some long-blooming seasonal color to your yard this spring. Once we reach mid-March the nurseries will be loaded with many possibilities. Petunias will give you a lot of color in sunny areas for about three months. After the summer rains start in June they normally decline. Pentas will hold up on through the summer and into fall. They prefer full sun but will take a little filtered sunlight too. Sunpatiens® will work in sun or shade and should hold up through the summer. Melampodium will give continuous yellow blooms in sunny areas through summer and into fall. Torenias, especially the trailing or vining types, are excellent for providing low-growing color in areas that receive morning sun but not so much harsh afternoon sun. But there are many other options, too, so visit a full-service nursery with knowledgeable employees that can guide you. 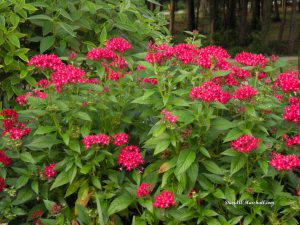 Pentas can be planted in mid to late March and will give color until late fall. Plant in full sun to light shade. Photo by David W. Marshall.

Also, later in the month, start planting perennials such as firebush, angel’s trumpet, cigar flower, and Turk’s cap so you will have color later in the season that will last into fall. These perennials will return each year, even if the tops get frozen back.

There’s no need to fertilize mature trees and shrubs that are growing well. But young plants which you’re trying to encourage to grow will benefit from an application of fertilizer now. The same 15-0-15 that you used for the lawn can be used on trees and shrubs, provided it’s not a weed-and-feed product with an herbicide. The exception would be with palms, especially if you’ve noticed that your palms haven’t been looking that healthy. Use an 8-2-12 or similar palm fertilizer that has four percent magnesium and micronutrients also. If you have a lot of palms in the lawn, just use this palm fertilizer on your whole lawn.

If you didn’t get around to fertilizing fruit plants in February, do it now. After mid-March is also a good time to plant new citrus trees such as satsuma, orange, or grapefruit. You have a full growing season ahead!

Anything that you plant now will need regular watering. That’s what they were receiving in the nursery. Remember that for several months, at least, all the roots will still be in the root ball that was in the pot, even after you put the plant in the ground. So, soak this root ball at least every other day. Don’t rely on a sprinkler system that only comes on once or twice a week. That’s not enough water for the limited root systems of new plants.